"Level Six and Chill? Not Quite, After Surprising Win Creates a Surprising Final Three"
By: Erik Walker | TV Reviews | September 24, 2018

Just when you thought the show would forever coast along and Level Six would “win out” until the end, Big Brother finally got interesting.

But it’s likely a case of too little, too late.

While it wasn’t really the result of any strategy (because the only outsider left won—it wasn’t a coup or blindside or amazing strategic move we’ll be talking about for years or days or even minutes), a surprise win by JC this week forced the three contestants left in Level Six to become the two contestants left in Level Six in one of the only glimmers of hope of a surprise in a season that has been rather depressing for lack of gameplay or creativity or ingenuity. 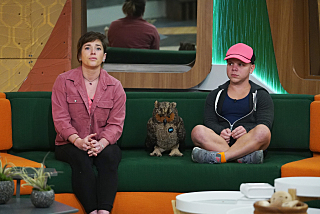 At first, it seemed it would be another week of coasting along, with viewers thinking (or, if you’re like me, internally screaming) “At some point, some strategy has to take place? Right? Right?”  The only problem with BB20 is there is only a week left so we’re running out of time.

After all, there were a few hints that the show was improving. Last week, the double-eviction sent Brett packing and actually required Level Six to think about gameplay and actually double-cross one of its own in a genuine blindside (albeit a double-eviction one). But at least Tyler and Kaycee and Angela did something and voted out Brett, who was “strategizing” (or as close to strategizing as this group can get) to team up with JC and vote out Angela and Kaycee.

But this week, it seemed to be back to boring let’s just sit and hang out in the house, at least for a while.

Continuing the string of I-can’t-believe-that-only-Level-Six-Can-Win-the-Head-of-Household Competitions, Angela won that “BB Flix and Chill” competition--a visual logic competition related to movie posters and BB imagery-- in what would eventually lead to a relatively boring, obvious, and drama-free unanimous dismissal of Sam from the house.

Before she left, the houseguests were entertained with a live performance by Bebe Rexha. While this is a reality program, clearly I think these contestants have also learned how to act. I have never seen a group of people more thrilled with having a performer in the room.

No, it wasn’t Beyonce. It wasn’t even Britney.

It was Bebe Rexha. 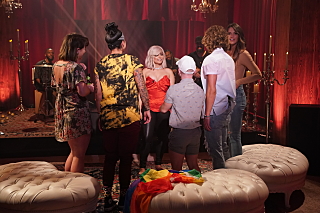 Sam broke into tears. Multiple times. Angela and Tyler and Kaycee seemed to fake so much elation you’d think they had won the Powerball. All contestants seemed to be entranced, as if spellbound or coached to react that way. (But that would never, happen, right? Right?)

We were forced to watch a BB Labyrinth Power of Veto competition where contestants learned how to successfully run through a maze (minus a minotaur—that might have provided some additional entertainment) in order to find 1 wizard, 2 wolves, and 3 witches (I was waiting for the Count from Sesame Street to appear because again, that would have been more entertaining than Bebe Rexha, but alas, no luck) and then pull a sword out of a stone.  The only amusing thing was Angela kept winding up at the witches, which she teasingly admitted to the camera might be a sign. 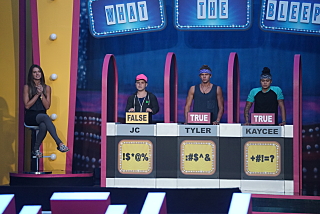 Kaycee won the veto and sent Sam packing with a sweet interview with Julie Chen Moonves (who made sure to keep stressing her name at the beginning and ending of every show)…  “I’m so very different…but it has been life changing” and it has “absolutely” made her a better person. Oh, Sweet Sam.

But that led us to a special one-day elimination Thursday, where in the annual “What the Bleep” competition (where they play video clips of players saying ordinary things but bleep the answers out to make them funny and then ask what the missing words are), JC defeated everyone else, finally breaking the several-week long winning streak of Level Six and unleashing more difficult-to-watch JC moments where he bragged about himself and made strange faces and noises and told the audience how he couldn’t wait to get some type of revenge.

JC targeted Angela and Tyler, and his nominations were left unchanged by Kaycee after she won the Power of Veto for the fifth time. And she left nominations the same. Again. Then Kaycee sent Angela home, leaving a final three of Kaycee, Tyler, and JC in the house. 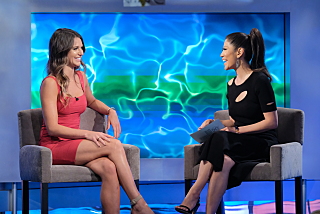 Angela, who started out as a cold-hearted villain (by privately laughing at some of the other houseguests early in the show and being fine with being the biggest “mean girl,” persona-wise), has grown a heart in the past few weeks. While not a complete Grinch-like transformation (her heart hasn’t grown three sizes but I’d guess about 1 and a half or so), her revelation a few weeks ago that she had a miserable childhood because her parents destroyed her childhood by requiring her to perform in gymnastics daily to the point where she had no ordinary life was powerful. We saw Angela as human, a victim of a terrible past. Her ability to grow a shell and be cold was something she was openly honest about and made her interesting. And it made a typically unremarkable developing showmance with Tyler even more remarkable, because it seemed to be a genuine, human connection. So while some of us may not have been rooting for her, I think she earned a lot of respect.

With Angela gone, that leaves two very strong players in Tyler and Kaycee, and one wildcard player in JC (who thinks he’s a mastermind, but he’s just above the Fessy line of intelligence and above the Mt. Rushmore line of annoyingness). Should make an interesting final week of BB20.