By: Patrick Cowles | PC News | December 19, 2013
After a sufficient teasing during BlizzCon 2013 and a month into closed beta, Blizzard has announced that Diablo III: Reaper of Souls will release for PC and Mac OS on March 25, 2014. Despite announcing the computer release date for the Diablo III expansion, Blizzard has yet to issue an official release date for the Playstation 4 launch, Diablo III: Ultimate Evil Edition, which will include the base game and expansion. 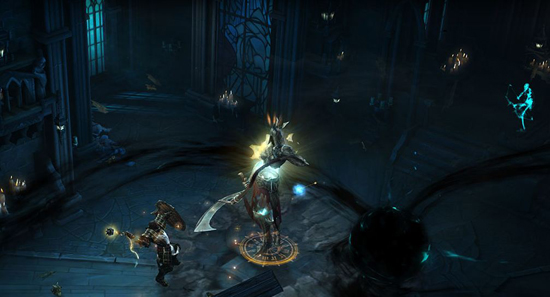 Following the tradition of it's predecessor Diablo expansions, Reaper of Souls will introduce another act to Diablo III along with an additional class, the Crusader.
However, the additions and changes to Diablo III through the expansion don't end there. Among the many additions and changes; the level cap will be raised to 70, expansions to the alternate advancement Paragon progression system, creature and quest bounties will randomize objectives and rewards for an element of continuity after completing the additional storyline of content, Adventure Mode will allow players to explore the entire game in a non-linear fashion with full access to every waypoint turning the game into a sandbox rather than progressing through each act, fully randomized extra-dimensional dungeons known as Nephalem Rifts will offer yet another element of continuity, yet another NPC artisan the Mystic providing loot-customization options to players, and of course the revamped loot system known as Loot 2.0.

As for Act IV, the Nephalem hero that vanquished the series arch antagonist the Lord of Terror Diablo during the base game will yet again be called to save humanity from doom. Set in the city of Westmarch, players must track down and confront the fallen Archangel of Wisdom Malthael, now the self-proclaimed Angel of Death, to retrieve the Black Soulstone housing the seven lords of Hell which the fallen archangel has taken to unleash upon the people of Sanctuary before bringing an end human-kind.


With Reaper of Souls, we’re taking Diablo III back to its darker, deadlier roots and also giving players a new way to experience the game,” said Mike Morhaime, CEO and cofounder of Blizzard Entertainment


Diablo III: Reaper of Souls will be sold in two packages. The Standard Edition at $40 will give players access to the new act and class, while the Digital Deluxe Edition will sell for $60. The deluxe edition will come with a Spectral Hound minion and a trio of ageless helms and weapons for Diablo III, a treasure goblin pet for World of Warcraft, and three Crusader portraits and decals for StarCraft II.  Reaper of Souls is available now for pre-purchase.