"A Souls Game at Heart"
By: Josh | PS4 News | August 19, 2014
Lets not beat around the bush here, Bloodborne is a spiritual successor to Dark Souls, which in turn is a spiritual successor to Demon's Souls. There was no surprise here as the head of the original Dark Souls is in fact driving the production in this game and it truly shows through the Gamescom demo just released today.
The short seven minute video gave some insight on just how the game would play and as you guessed, it is startlingly similar to something in the Souls games. With that said, there is a lot that feels fresh and Bloodborne, so much so that this is now one of my most anticipated games of next year. 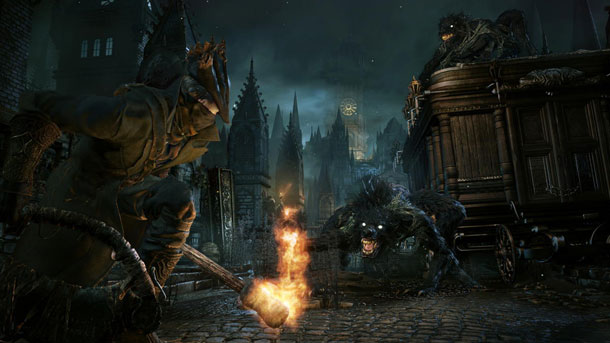 First and foremost, the combat is nearly identical to the Souls games. It is methodical, punishing, and always seems to keep you on your toes. The absence of shields and additions of firearms seem to really create a different style to the game. No longer can players rely on their heavy duty shield (like I always did) to block every incoming attack, you are now forced to be agile and quick on your rolls and counter attacks.
I managed to pick out some hidden pieces within the trailers, such as the fact that there will be at the very least multiple melee weapons at your disposal. A few minutes into the trailer the overly large razor blade weapon gets replaced by an axe. The presentation of some kind of co-op or at the very least AI compatriot was also given light for a few moments as we see two similar characters battling some vicious fiends together. The last thing that really caught my eye was just the absolutely stunning artstyle and visuals. I really love the semi-Gothic London/Transylvania theme they are shooting for. Unlike the Souls games which are set in a completely fantastical world, Bloodborne captures the essence of a world that could be reality. The staple of having disturbing looking enemies and bosses seems to also be intact despite the very small piece of gameplay we are given.

Bloodborne is a Playstation 4 exclusive and is set to release early 2015 and I for one hope it does not get pushed back.