This week’s episode of Breaking Bad is entitled “Ozymandias,” after the Percy Bysshe Shelley poem of the same name. And what an apt title for an episode that forces Walt, standing in the “lone and level sands” of the desert, to look on his works and despair for what he has wrought.

Breaking Bad has perfected the art of the flash forward, so it is particularly interesting to see this episode open with a flashback to the pilot, with Walt and Jesse working on their first cook in the same location where Walt buried his ill-begotten gains - and where last week’s desert shoot-out took place. Seeing Walt craft his first lie for Skyler, honestly believing he could cook meth and have his family be none the wiser, is hard to watch.

The heartfelt “Love you”s between Walt and Skyler, juxtaposing nicely with Hank and Marie’s from last week, show how far that relationship has deteriorated over the course of the series. And watching Walt, Jesse, and the RV fade into the New Mexico sun left me with a sick feeling in the pit of my stomach, longing for the early days of the show when there was hope that Walt could overcome the quagmire into which he was sinking deeper and deeper. 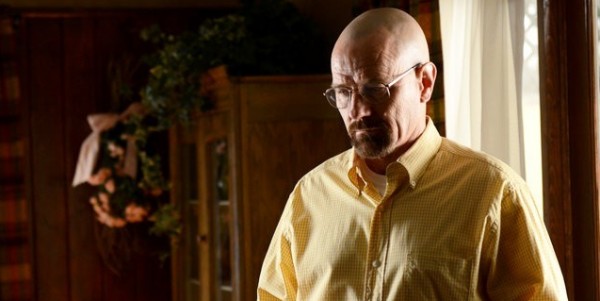 Returning to the shoot-out, hearing the gunshots and then fading into the scene from last week’s cliffhanger, is another stunning transition. As many surely thought after last week’s episode, the news is not good. Gomie is dead. In a desperate attempt to save Hank, Walt abandons all Heisenberg notions and offers Uncle Jack his money in exchange for Hank’s life. But Uncle Jack, Hank, and (most likely) the audience are five steps ahead of poor Walt. Uncle Jack is never going to let Hank live. And he figured out there was something in the desert at the coordinates Walt gave him before he ever arrived.

When the gun goes off, killing Hank, it also kills whatever is left of that Walt we met in the series pilot. Walt falls to the ground, his face impacting the sand. In the sand, as Shelley's poem reads, "a shattered visage lies, whose frown,/And wrinkled lip, and sneer of cold command" once belonged to the most feared drug kingpin in the western United States. Now, he is a broken man who has lost all hope he once held.

But wait, Walt notices something under the car across the desert. A spark of hope flares. There is someone to blame for all of this besides himself. The pain recedes, and the anger flares. Walt doesn’t live here anymore. My name is Heisenberg, how may I help you?

The transition from Walt to Heisenberg is clear. While Walt begs for the life of his brother-in-law, the man who was about to take him in and send him to prison for the rest of his life, Heisenberg coldly instructs Uncle Jack to kill the young man he once thought of as a surrogate son. But, not before he deals a final crushing blow to poor, tortured Jesse: Walt stood idly by while Jane choked to death. One last truth to destroy Jesse's spirit. 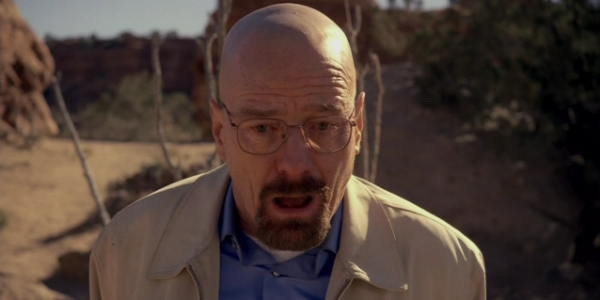 Vince Gilligan has always summed up the series as “Mr. Chips becomes Scarface,” and many have tried to pinpoint moments in the series where this transformation finally comes to fruition. I’m fairly confident in pointing to the death of Hank as the final moment of transition in Walt’s journey. When Walt stands up, having spotted Jesse hiding under the car, it’s clear that the last shred of Walt’s humanity left him when the bullet left Jack’s gun and entered Hank’s head. His actions throughout the rest of the episode, culminating in his terrifying confrontation with Walt, Jr. and Skyler, signal the end of the man from the opening moments of this episode. I cannot imagine anyone still hopes to see him come out on top in two weeks.

But, as so often happens with Breaking Bad, after there is a horrific glimpse of Heisenberg, some small threads of Walt once again break through the hard facade. Walt's phone call with Skyler marks that point in this episode. It is clear that Walt knows the cops are there and listening. After his miscalculation with Jesse and the money, how could he make the same mistake again? The conversation is largely aimed to cast suspicion off Skyler. A last ditch effort to protect the ones he loves - even if his family no longer wants his protection as it has cost them so much already.

However, I don't think it's just an act for the cops. Rather, I see it as a warning to both Skyler and the police. For Skyler, it is him telling her to stay away. Don't look for him, don't try to use Saul to find him. Just stay away.  Walt's primary focus right now is staying safe himself, and escaping so he can formulate a plan without distractions. Heisenberg does his best work when he can survive without immediate distractions. For the police, it's also a tool to keep them at bay. After all, if they think he killed two DEA agents, who knows what else he is capable of. Walt wants to save Walt.

While Walt has finally burned the last bridges with his family, Jesse is more lost than he has ever been. Under the control of Todd and the Nazis, things do not look good for Mr. Pinkman. After receiving a beating, it appears that Jesse has been forced into becoming the new cook - with a photo of Andrea and Brock reminding him of what he stands to lose if he steps out of line. With Walt using Saul’s guy to disappear, it looks like Jesse may be stuck in servitude for a while. 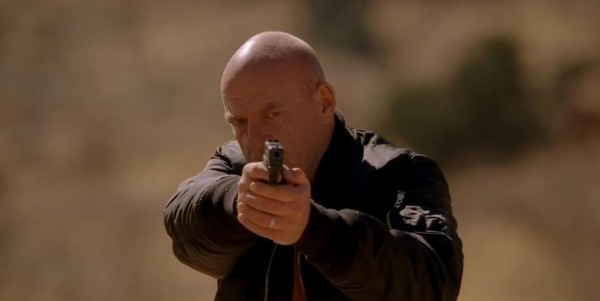 -- Once Hank fails to capture Walt, his death is inevitable. The character had reached the end of his storyline and needs to go. But that doesn’t mean I won’t miss Hank and the excellent work by Dean Norris this season. Hank was a character who, along with Marie, served as comic relief for the first few seasons. The way he became such a touchstone for good on the series was remarkable. I’m hoping Norris is recognized for his work with an Emmy nomination next year.

-- This episode is full of stellar acting on all fronts. Bryan Cranston and Aaron Paul are, as usual, spectacular. Anna Gunn’s eyes during the Walt phone call are chilling - you can see the exact moment Skyler decides to lie to Walt in hopes of convincing him to bring Holly back, as well as the anguish when she realizes he won’t. Betsy Brandt’s work as Marie, from being calm and in control at the car wash to the pain she experiences when she learns Hank is dead, is amazing. And last but not least, RJ Mitte is finally given something to do as Junior learns the depths of his father’s actions. Mitte’s showing of disbelief upon initially hearing the news, followed by the look of contempt when he realizes it's the truth, show great range for the young actor.

-- One more thought on the Walt-Skyler phone conversation. In addition to its role within the plot, Walt's dialogue is certainly a call out to the many vitrolic and awful things that have been spewed forth on various message boards about Skyler during the show's run. Skyler has been a punching bag for many who want to see Walt win, and this dialogue sees the same venom that has been aimed at Skyler by fans spoken by Walt. A final, "So you hate Skyler with a passion? Let's see how your words sound coming from the mouth of a monster." Frankly, it's sickening to hear - just as sickening as it has been to read the same diatribes year after year.

-- I’m sticking with my prediction from last week with regard to the M60. As for the ricin, I’m torn. Maybe it's still for Lydia, but perhaps Walt will use it to finally fall on his sword.

-- I'm happy to see the note on Holly, when she's mercifully left at the fire station, seems to contain her address and name. So, at least Holly will walk out of this episode unscathed.

-- Also, when did Holly learn to talk?

-- This week's costume color watch: Marie is dressed in all black once again, while Skyler is wearing white (as is Walt). Is Marie the one with the darkness inside of her, or is she just already mourning the loss of Hank?

-- We’ve sent Walt off to New Hampshire. So with two episodes left, is it time for the flash forward to become the present?

-- If you haven’t, I highly recommend reading through “Ozymandias.” I have a feeling there may be some clues in the poem that offer hints as to what may be still to come. And even if there aren’t, the parallels between the poem and Walt’s journey to the desert and back again are brilliant.