By: Patrick Cowles | PC Reviews | January 25, 2014
Two weeks shy of two years ago Tim Schafer and Greg Rice put the final touches on the Kickstarter page for Double Fine's latest adventure, the return to graphical adventure games. Labelled at the time as Double Fine Adventure, the successful Kickstarter campaign gave birth to what is now known as Broken Age.
Though relatively doubtful in a crude video documenting the Kickstarter publication, Schafer jovially lamented over their funding target of a few hundred thousand dollars while Rice encouraged him to simply get the campaign online and going; within two hours the project had received over $100,000 in support, within eight hours the project had reached it's target of $400,000 and by the time the campaign ended over $3.3 million had been pleged towards the project. On January 28th, made possible by the development team at Double Fine Productions at 87,142 Kickstarter supporters, Broken Age will release via Steam for Windows, Mac OS, and Linux operating systems. 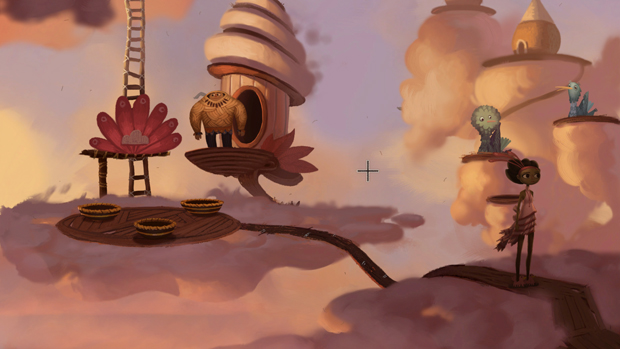 However, despite Schafer's experience in a virtually forgotten genre and possibly his musing by Ron Gilbert whom joined his old colleague at Double Fine to develop The Cave which released this past October; Broken Age is a point-and-click (with some dragging) graphical adventure game that while prevailing at staying true to the heart of the genre is also true to it's ambiguous title. The game breaks adventure conventionality in a few senses of which most do well at evolving the genre through game mechanic and modern rendering capabilities, but also serves the narrative into a pair of acts; the second of which will release later this year.
Leading player's through a tale of two lives, Broken Age allows the player to seamlessly jump between two teenage characters, Shay and Vella. Navigating the perils of both space and childish captivity by the graces of a parental warden computer Shay forlornly awakes each day to the same routine; a computer-assisted shower, cereal for breakfast, harmless missions, nutrient paste for dinner, computer-assisted dental care, the constant overly protective nagging of a loving motherly computer, and sound sleep beneath a holographic blanket. Vella however is questioning the nature of her preordained sacrifice to a behemoth monster with a will to fight back to save herself. Though living separate and distant lives, they both seek escape from their current circumstances which leads into their own personal adventures throughout Act 1. 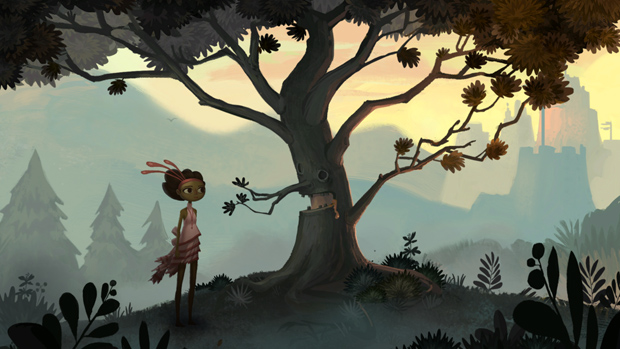 Since adventure games thrive on a sense of discovery, we'll leave the storyline synopsis at that. These games have never been about playing through action with cutscenes of context, adventure as it is defined reigns over every aspect of gameplay; from the items you find and how they interact with the characters and world you encounter, to the storyline and how your character interacts within it and unveils it by progressing through the game. Broken Age is no exception, everything can hide a hint and the only aspect of the game that resembles a tutorial is the first time Shay eats his cereal. It is an adventure for sure, and one that would be ruined without brevity in summary.
Perspective and Aesthetic
Since I first played Myst and the King's Quest series and into the late 90's adventure titles, the background image, your drape of perspective never changed. It was as fixed as your desktop background. Though items and characters might move across it, such as icons on your desktop; the static backdrop hung in stasis like a stage performance. In Broken Age the team at Double Fine broke the mold of convention, rather than having that fixed perspective the camera pans and zooms in and out as the player-character model moves across the screen. When you navigate towards an adjacent area the camera follows and zooms, as you navigate away from adjacent areas the camera zooms out remains still showing the full panorama of the area. The world is also lavishly animated compared to the adventure titles of old, and not just on the stage, but also in the backdrop. Character models move and interact with themselves or one another in a manner that fits their individual or collective moods that you can gauge after a conversation, while ambient animations at the horizon give life to the distant background such as flocks of birds flying or shooting stars traversing outside the windows of Shay's ship. These animations cast a particular illusion on the eye by bringing a sense of vitality to the earthly world Vella resides on along with a sense of inertia in Shay's ship as the stars in the background cascade in the distant giving the ship an appearance of movement.

The colors and design aesthetic are also marvelous touches. Though adventure games have never commanded the same demand as action oriented games or blockbuster titles, the visual presentation of Broken Age is a clear example of artistic quality on behalf of Double Fine. Vella's homeworld is bathed in a vibrance of color, light, and shadow with rich pastel colors painting the earthly world in a vivid sense of artistry. The backdrops of the planet carry an impressionist aesthetic, if viewed at a great distance, with a seamless mixture of color and brush stroke rather than a masterful collection of blotches. The articulately detailed character-models offer a stark contrast to the abstract pastel nature with a greater and more stark selection of colors and defined shape.
Shay's ship on the other hand resembles a Willy Wonka rendition of Gene Roddenberry's school of spaceship design with a heavy-handed touch of infant nursery. Though inherently childish, the design of the ship is not grossly exaggerated, though the Mother Warden computer is and as one would presume wholesomely by design to further antagonize the player into sympathizing with Shay's lethargy. However, the artificial lighting and color tones both inside and outside the vessel wonderfully portray both the void and grandeur of space with a deep sheet of black dotted endlessly with distant stars provides a soft contrast to the darker blues of Shay's bedroom. The staggeringly beautiful color spectrum emitted from nebula with an ethereal cascade of violet blending into pink is also present just outside the observation window's in his room. 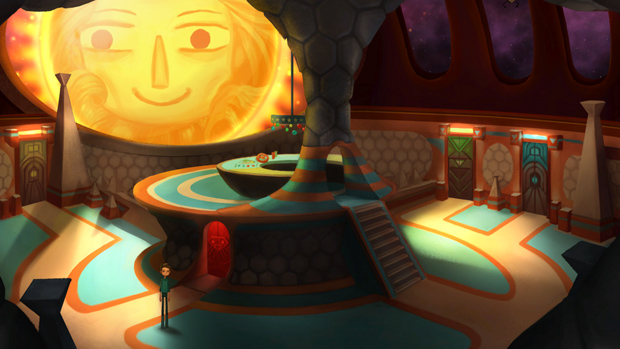 The game is a rich and vibrant visual presentation which adds another layer to the sense of adventure and discovery as more details however obvious or subtle are revealed as you pan across each scene.
Dialogue
Considering the cast of voice actors, the dialogue is yet another treat. Featuring Elijah Wood as Shay, Masasa Moyo as Vella, Jack Black as the philosophical Harm'ny Lightbeard, and Wil Wheaton as the subtely pretentious lumberjack and woodworker Curtis; the dialogue carries a healthy portion of wit and humor penned with contemporary vernacular and personality. Many comically induced conversations feature ridiculous though hilarious exchanges with the peculiar inhabitants of the estranged segmented world below and also within the hulls of Shay's ship. Though much of the dialogue does seem for show, considering the cast, the vocal cues throughout each conversation are deliberate yet veiled hints for progression throughout the story which provide a good balance between entertainment and necessary context. 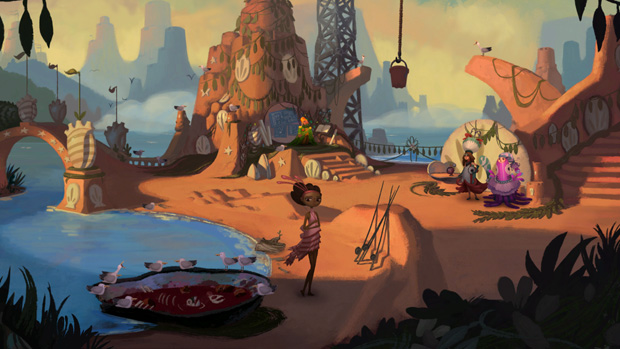 However, the game is not without shortcomings. Mouse controls though fine for navigation throughout each scene struggle with interaction between items and character models.  Although there is an option for dragging-and-dropping or point-and-click, they aren't strictly defined as I can still drag-and-drop items with the point-and-click option selected. Though the game only has a single aspect of user-interface, the Inventory toolbar which resides at the bottom of the screen, a small arrow icon hidden in the bottom-left corner of the screen allows you to reveal the hidden Inventory toolbar. The problem the auto-hide Inventory arrow causes is one of navigation, as you will come to know you can't cursor over that area of the screen to move there, it will also consequently pop-up on the few occasions you have to cursor to that corner of the screen to move to another area. Nor is this auto-hide function necessary at all, at least for the PC clients where the Inventory toolbar can be keymapped to your mouse if you wish to play the game without your hands on the keyboard.
None the less Broken Age is a perplexing first act of an adventure through the tale of two lives with a storyline beginning to be eclipsed by it's final act, which set to release later this year. Though it may be Tim Schafer's first adventure game since Grim Fandango which released a sweet yet sorrowful 16 years ago in 1998, he clearly hasn't lost his design touch for the genre and his development team at Double Fine Productions has brought to reality the dreams of at least 87,142 users on Kickstarter with a solid effort.
Rating
8.0
Pros