"Zombies and John Malkovich Are Coming To Call of Duty. Seriously. "
By: Zack Zwiezen | PC News - PS3 News - PS4 News - Xbox 360 News - Xbox One News | December 19, 2014
Activision and Sledgehammer have released a new teaser for the upcoming Exo-Zombies DLC for Call of Duty: Advanced Warfare. One part of the first DLC for the game, this DLC is expected to come out January 2015 for Xbox One and Xbox 360. This new DLC will have players fighting against waves of zombies who will be wearing the Exo suits. This will most likely allow the undead to jump, dash and more towards players and could be a more intense and fast paced version of the popular Call of Duty game mode.

A interesting surprise is that this DLC will have some well known Hollywood talent in it, including John Malkovich. Rose McGowan. This reminds me a bit of the Call of Duty Black Ops DLC Call of The Dead, which had George A. Romero in it along with other well known celebrities. A Black Ops 2 DLC map set in Alcatraz also boasted some well known Hollywood talent. So this isn't a new thing for the series, but it is still surprising to hear people like Bill Paxton or John Malkovich in a Call of Duty DLC trailer.
Call of Duty: Advanced Warfare's Zombies mode was teased at the end of the Exo-Survival mode if players finished enough waves on each map. This teaser showed you and some other soldiers escaping a large and fast moving group of zombies via a helicopter. Sledgehammer has stated that their version of Zombies will be different than the previous modes found mostly in the Treyarch developed Call of Dutys. 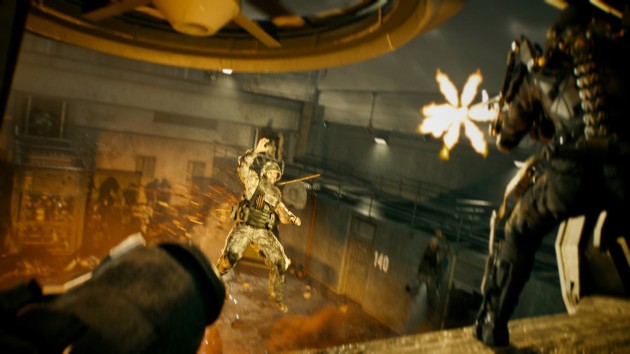 No information about non-Xbox platforms was given, but you can expect a similar delay to previous games. Microsoft and Activision have had a long running deal for Call of Duty DLC launching first on Xbox, similar to the newer Sony deal to get Destiny DLC first. (Though for Destiny it's only a part of the DLC.)
Call of Duty Advanced Warfare is out now on Xbox One, PS4, PS3, Xbox 360 and PC. You can read our review of Advanced Warfare here. You can also read about the weird and complex Call of Duty Multiverse here.