I really wanted to like Carnival Row, the new fantasy series from Amazon. I really did. I was ready to throw in the towel after watching three of the eight episodes in the first season (the series has already been renewed for a second), but then I read some early reviews that urged it gets better after episode three so I held on. And I kept holding on, all the way through episode six. And then I quit. Because I (like everyone else in the world of Peak TV in which we live) don’t have time for a show I don’t enjoy. Perhaps this will be one of those shows that figures out its issues in season two and gets me to jump back on the train. But as of now, I can’t recommend the show.

So, just what is Carnival Row? The popular description seems to be that it’s a Game of Thrones/Penny Dreadful mix, but really, it’s more Lord of the Rings meets Penny Dreadful meets season one of The Terror. There are mystical creatures just hanging out around the normal human characters in a world that is ripe with xenophobia and a history of dangerous colonialism (the humans of the central town were helping the creatures fight against other humans from another land, only to abandon them to the cruel yolk of colonial rule – and now those creatures who have escaped to the central town are refugees who are treated abhorrently by the ruling humans – the parallels to events of today are pretty obvious). On its face, it’s an interesting (and sadly, universal) story. The steampunk aesthetics are cool, the mix of creatures interesting (adding fae is always a gamble, but it works here), and there are a number of excellent actors in the cast. But there are also a host of problems, apparent from the earliest moments of the series.

Orlando Bloom and Cara Delevigne are ridiculously good-looking individuals. They, however, are not strong actors. Bloom, perhaps best known for his turn in The Lord of the Rings, is best when he’s given little to do beyond staring into the middle distance. Delevigne, best known for being a super model, is also at her best when she’s allowed to stare into the middle distance (although she gives the strong performance of the pair in the series). Hanging the emotional center of a fantasy drama on these two performances was not the best decision and the show absolutely suffers from it. That being said, I’m not sure even Meryl Streep and Tom Hanks could have saved a series that doesn’t understand exactly what it wants to be. 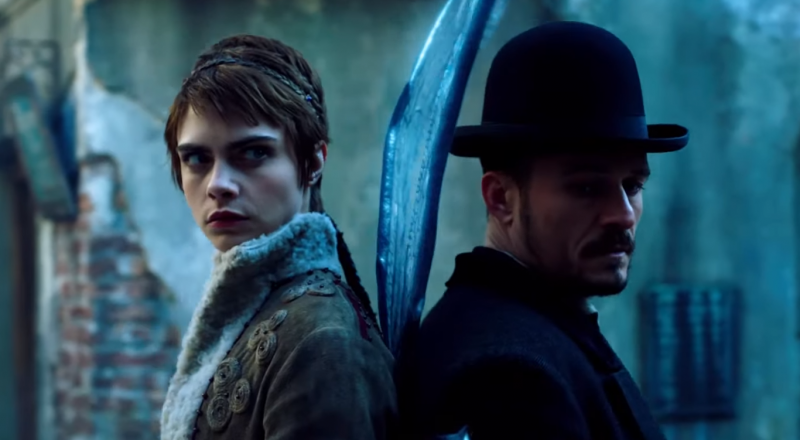 There are four central storylines in Carnival Row, all tied up in layers of mythology that the writers take great pains not to explain. There isn’t an exposition dump, we don’t get an understanding of the different fantastical creatures (outside of the fae) until several episodes into the series, and we don’t get a real understanding of the socio-political background until a flashback episode early in the season. Now, I’m not saying the series needs to send out a cheat sheet to viewers, but I honestly couldn’t tell you the name of the two warring human factions, or even the names of most of the show’s major characters after watching six episodes, and that’s a problem. Look at something like Game of Thrones: it was clear from the first episode how this world functioned and who the major players were. Carnival Row isn’t trying to be the next Thrones (except it kind of is), but it should take a page from the series and focus on concrete world building before stuffing the show with plot that lacks a foundation.

The story arcs also have varying degrees of success. The main plotline – the tortured romance between Bloom and Delevigne’s characters – works in the sense that it’s relatively easy to follow and it gives Delevigne a chance to be angry (which allows her to do her best acting). That being said, the duo have almost zero chemistry, so it’s hard to root for these two star-crossed kids to find there way back to each other. The romance also bleeds into a subplot regarding a band of fae seeking revenge for their abhorrent treatment at the hands of the humans (which is decently interesting, albeit pretty paint by numbers), but the show is clearly more interested in the relationship between the two characters than the budding fae rebellion. The other less-than-successful arc involves a monster of some sort killing off various people (both fae and those who dealt with fae). It’s the one arc that feels completely out of place in the series, which spends time trying to normalize the fantastical only to have this strange, monstrosity show up in the shadows.

The other two arcs are a bit more successful, mostly owing to the talented actors inhabiting them. Jared Harris (who is in pretty much everything these days, including HBO’s sensational Chernobyl, for which he is nominated for an Emmy) and Indira Varma (perhaps best known for her work as Ellaria Sand on Game of Thrones) make the most of their political intrigue arc. Varma’s Piety Breakspear is a knock-off Cersei Lannister, scheming behind her husband’s (played by Harris) back. The arc is rife with melodrama, but Harris and Varma can sell pretty much anything, even the most ridiculous, so I found myself relatively intrigued while watching their scenes play out. 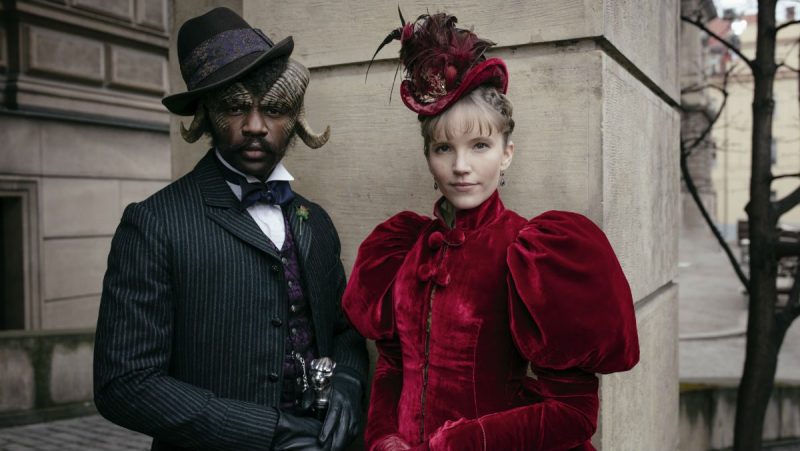 The best arc of the series, however, belongs to Tamzin Merchant’s Imogen Spurnrose character. It’s a relatively simple storyline: stuck-up rich girl loses the family money and must rely on someone she finds repugnant to save her – only to realize that this person isn’t really repugnant, it was in fact her own bias that was. In this case, the repugnant person is a puck named Agreus (played with aplomb by David Gyasi), who has worked his way into the upper class but finds himself shunned for not being human. It’s an intriguing arc that is made all the better by Merchant and Gyasi’s work. If this were the central arc of the series I would wholeheartedly be recommending it. However, with so much of the show taken up by Bloom and Delevigne’s soulless work, this intriguing piece of writing is relegated to the B or C plot of each episode (when it appears at all). It’s unfortunate.

So, Carnival Row is a largely disappointing delve by Amazon into the realm of fantasy. There’s an interesting show hiding within it, and if the writers opt to jettison their two leads and focus on the show’s stronger actors, there’s hope that the show’s second season might be a tad more interesting. That being said, if you’re looking for a show that hits on any of these themes or this type of genre, might I recommend taking a look at AMC’s The Terror (which, naturally, also starred Harris), Showtime’s excellent Penny Dreadful, or, if you’re looking for a diverse, interesting Amazon binge, The Expanse (the first season is rough, but it really comes into its own in subsequent seasons – plus there’s a great subplot dealing with political power, something Carnival Roe doesn’t seem to be able to get right).