By: Patrick Cowles | PC Features | January 9, 2014
Since John Carmack infamously teased Palmer Luckey's virtual reality head-mounted display prototype during E3 in 2012, the idea which was Oculus has solidified into a reality which the device seeks to simulate. Now over a year since a successful Kickstarter campaign and the delivery of numerous Oculus Rift developer kits, Oculus VR unveiled another prototype this year at CES.
Known as the Crystal Cove; the next Oculus VR prototype is an impressive improvement over the Rift dev kit implementing an additional technology to the head-mounted display while replacing the LCD display screens with a different technology. Now featuring Positional Head Tracking, the Crystal Cove opens users to a more dynamic field and depth of view by offering a greater range of motion within the virtually simulated environment of their game. The display screens for the Crystal Cove on the other hand are Active Matrix OLED screens which have helped to alleviate visual distortions, or motion blurring, while furthermore reducing latency and fixed-pattern noise, commonly referred to as the screen door effect. 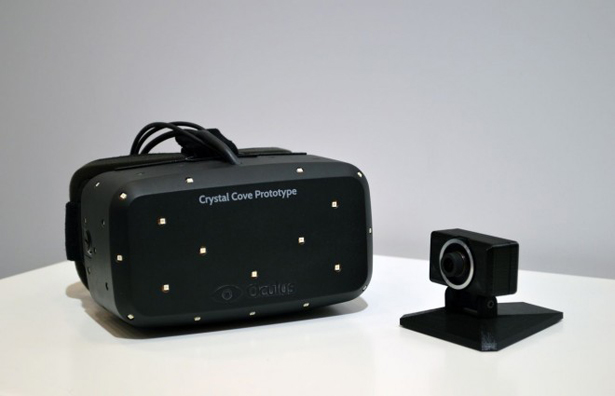 Though some outlets have overly rejoiced these latest developments in the evolution of the Oculus headset as monumental leaps, they are steps forward towards a device that has the potential to greatly alter how gamers visually experience the digital environments they roam; however these latest improvements to the Oculus are not the great leaps forward more exuberant reporters have characterized, but are rather two more necessary bricks in a wall that is progressively becoming more complete.
None the less combining these additional technologies into a head-mounted display has resulted in a virtual reality experience far greater than their collective sums, which is something every gamer can enthusiastically herald.
As a technology, Positional Head Tracking is nothing new, even to the gaming world. Dating back as early as 2001 for utilization with Microsoft Flight Simulator, and other flight simulators, NaturalPoint's TrackIR system has offered the same six-degrees of freedom which the Crystal Cove now provides for Oculus. However, the magic of implementing this technology within a head-mounted display is that your field of view moves with your head and subsequent body movements which effect your head's orientation; providing an immersive experience with much greater fidelity than TrackIR.
Now that Oculus through the Crystal Cove has unleashed users into a fully three-dimensional visual experience by granting six-degrees of freedom the device has come full circle on the team's goal of fully immersing users into the digital environment of their game. When you lean your torso and head forward objects appear to become larger as they fill up more of the display, if you tilt your head left or right the view in the display tilts with you; replicating not only pitch, yaw, and roll, but furthermore providing depth through body and head orientation in three-dimensional space. Though TrackIR users are benefitted with the same freedom and depth of movement, the technology requires a scaling of motion. If you look over your shoulder with TrackIR you've taken your eyes off your display; to overcome the limitation of a fixed-forward display TrackIR amplifies your movements which results in an asymmetrical experience. By integrating a display within a headset, motion scaling becomes obsolete providing a more realistic expectation of movement to viewpoint within a virtual simulation.
Though technologically, the implementation of Positional Head Tracking is a larger step forward for Oculus, the utilization of Active Matrix OLED displays within the Crystal Cove has improved upon the visual fidelity of it's predecessor prototype by correcting the visual anomalies inherent with the Oculus Rift dev kit, due mainly in part to their LCD displays. Explained in much greater depth by Michael Abrash, developer with Valve Software; the resultant "judder," or motion blur, inherent with the dev kit is caused by the length of time a pixel is illuminated in relation to the retina. By actively controlling and limiting the time pixels are illuminated by the display, the light they emit is limited in it's movement across the retina. The longer that light moves across the retina in time, the degree of visual distortions will be greater as the retina smears your view of the image on the display from cascading light emissions. Since the Crystal Cove has the ability through it's display to actively control the time pixels are illuminated through a low persistence in illumination, motion blurring has been significantly reduced.
Organic light-emitting diode displays offer Oculus other advantages which has improved visual fidelity.  Since they pulse light through pixels, rather than filtering a backlight like LCDs, OLEDs have a greater response time and frame rates than their LCD counterparts.  These faster response times and higher frame rates have helped to further reduce visual distortions, but more importantly have reduced latency which is key to the virtual reality experience. When you move, the image must move with you if your end goal is quality; since Active Matrix OLED displays offer sub-millisecond response times and frame rates towards 1000Hz, the Oculus has benefited in regards to latency.  A direct emission of light rather than filtering a backlight also reduces the weight of the display while offering more controlled presentation of color, including pure black as inactive diodes emit no light. Since OLED displays can be fabricated on flexible plastic substrates; naturally curved displays can offer Oculus the capability to produce future head-mounted displays with screens that stretch and curve beyond one's peripheral view for a greater immersive visual simulation.
However, OLEDs are not the Holy Grail they seem to be despite what has been stated above. They are constructed with organic components which breakdown more quickly than LCD components. Though they won't burn out as LCD displays can, when a color component degrades not only does the overall quality of that specific color decay, the entire spectrum of color begins to decay with it because of color balancing. Due to limitations in the effectiveness of blue OLEDs in contrast to green and red, the issue of color balancing is paired by a a cousin of concern as they have a shorter lifespans than green and red OLEDs foreshadowing a reduction in color fidelity over time.
For now the Oculus team is marching forward, rather than charging; though the blitz to release a consumer product by years' end may be motivating the young company to pull through on an expected late 2014 consumer model, the Crystal Cove represents steps forward for Oculus development not leaps nor bounds. As WIRED quoted Oculus VR CEO Brendan Iribe, the company is simply not sure what hardware will be used in the consumer release though Iribe stated the resolution will be at least 1080p HD; given their uncertainty in hardware to date it is possible the world won't hear of a consumer release date until CES 2015. Yet, if Oculus VR does release a consumer model within the next twelve months, expect distribution to be sparse due to limited supply.