"One More Turn and Few More Additions But is It Enough?"
By: Carson Yip | PC Reviews | October 27, 2016
One more turn. Civilization as a series markets its addictiveness, and Civilization VI enjoys positive early reviews that assure met expectations. I'm hesitant to hop on the bandwagon so quickly. I want to first admit, however, that turn-based strategy isn't my primary interest. Real time strategy and realism appeal more to me, but I enjoyed the open ended paths to victory that were apparent in Civilization V. Like its predecessor, Civilization VI weaves together all of the aspects for victory conditions together. Certain choices along each path contribute towards a particular victory; military, cultural, and science, among others. This requires players to understand all paths to victory but prioritize only one. Foreplanning in Civilization is paramount.

To new players, this sophisticated system may at first seem daunting. Managing every single aspect of a civilization is one thing; strategizing a plan to victory is another matter entirely. In terms of user experience, a player should find essential information for key elements of gameplay easily accessible. The shift in UI design from Civilization V to VI took a step in a more complex direction. 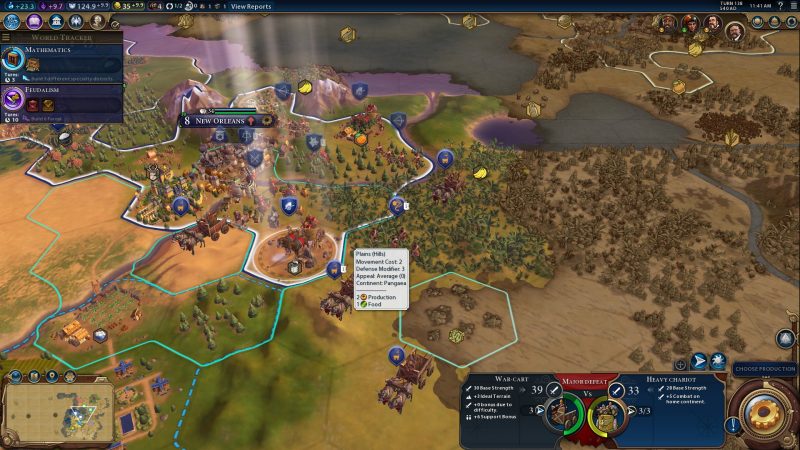 Civilization V's user interface was designed with Windows 8 touch features in mind, and featured mouseover texts on easy-to-touch buttons. In contrast, Civilization VI tries to accomplish a broader level of information while minimizing visual clutter. The end result requires players to focus on a particular corner of the screen to glean information. In particular, I find the minimap on the lower left corner of the screen and the tiny experience bar on the bottom right difficult to glean information from. I also found it difficult to keep track of the strategic resources available for me to utilize (represented by the tiny icons at the top menu bar). Though players familiar with Civilization might to get used to the new interface, players entirely new to the series might run into difficulty. The tutorial helps alleviate much of these problems but gives little advice into methods for success.

One of the new features in Civilization VI is the ability to boost research in civics and science through particular objectives, like defeating enemies with certain units or having a certain number of buildings. This encourages players to develop their technology down a path that suits their playstyle. This does however, limit a player to their determined path once set. It becomes increasingly difficult to switch to a different strategy when facing a change in circumstances. Victory for quicker games thus requires a knowledge of each strategy such that one can use an approach's strengths to make up for its weaknesses. Quicker games also punish mistakes more than a longer match would. At the same time, leveling overhauls now allow both for combat bonuses as well as healing promoted units. This comes at the expense of using up its available actions for the turn. Purchasing units and structures run at a prohibitive cost unless a player's civilization devotes most of its production towards gathering wealth. Again, decisions early on weigh into a player's available options when pursuing a path to success.

On the other hand, dealing with computer opponents became easier. With a new system of agendas and values unique to each civilization. Savvy players can determine their actions and plans alongside other civilizations that they have diplomatic ties to. This allows players to tailor their strategy to appease powerful nations or to plot their eventual downfall (or both). [caption id="attachment_89888" align="alignnone" width="800"] 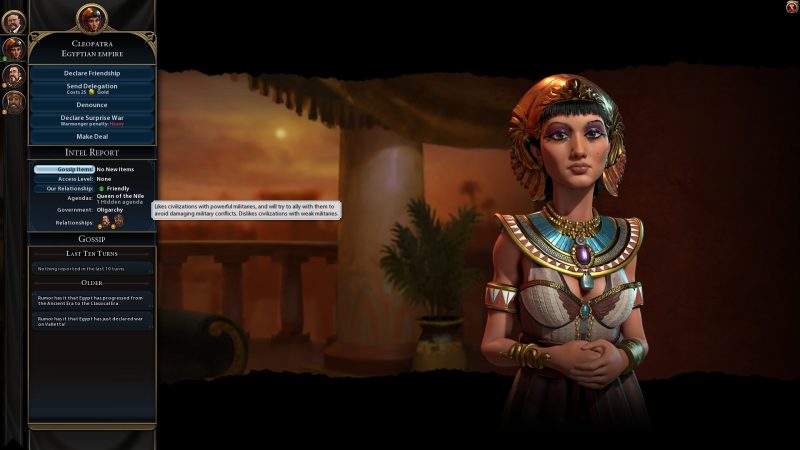 Civilization VI shows the agendas of encountered nations[/caption] Civilization VI also includes a more sophisticated system for conflict, where players can either decide to mount a surprise attack or formally declare war before attacking. This adds yet another depth into the strategy and planning that players must pursue.

Is It Worth Buying?

Despite its drawbacks, Civilization VI remains true to the feel and essence of its predecessors. The new features, for better or worse, do not fundamentally change the model of the game at its core. For the most part, the shortcomings in Civilization VI's new features affect accessibility rather than performance. Players familiar with Civilization do not have to learn Civilization VI all over again, they have only to pick up the new city features and adapt to minor tweaks in combat, research, policy, and diplomacy. Players entirely new to the series might find the learning curve steep, but the tutorial covers much of the basics. Success in Civilization VI, however, depends mostly on experience. Overall, Firaxis's latest entry for the series maintains a healthy balance between innovation and preserving effective features of previous titles. For new players, Civilization VI is as good as any other title to get into the series. For players who own previous titles, I hesitate to recommend paying full-price for what amounts to incremental additions to past installments.
Rating
7.5
Pros

Carson Yip
About / Bio
Throughout high school and college, I have aspired to write for videogames, and in the meantime, put to use my skills in analysis on the reception end of things.

Besides graphics-intensive shooters and AAA titles, I also have a vested interest in RTS and RPGs. Story and how it impacts gameplay are the two biggest measures of a game's worth to me. The rest are details.