A new adaptation of Jules Verne’s classic sci-fi/steampunk novel 20,000 Leagues Under the Sea has been in the Hollywood pipeline for years now, but producers have been cautious when it comes to pulling the trigger on what will likely be a massively expensive, effects-driven project. They might be a little less gun-shy, however, if Brad Pitt were to board the Nautilus.

In 2009, plans to hand the film over to McG were quickly scuttled, and it’s now been over two years since David Fincher announced at Comic-Con that he would be teaming with writer Scott Z. Burns to direct a new version for Walt Disney Pictures. 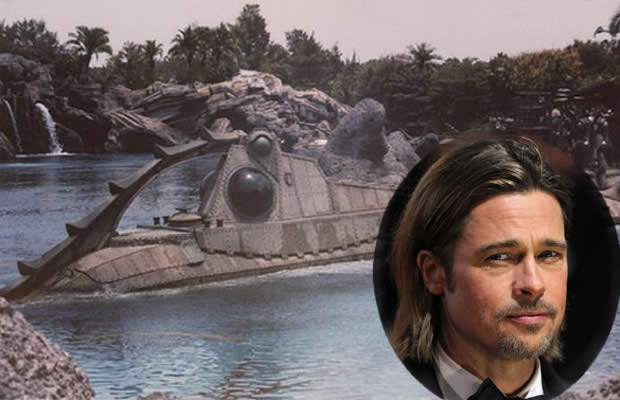 Screenplay duties have since been passed on to Fincher’s Se7en collaborator Andrew Kevin Walker, and it looks like the director is turning to another familiar co-worker to revive interest in the flagging project. Variety reports that Fincher wants Pitt to play sailor/harpooner Ned Land (played by Kirk Douglas in the 1954 adaptation). Fincher has already worked with the star on Se7en, Fight Club and The Curious Case of Benjamin Button.

Fincher still has no greenlight to move forward, and Disney apparently has the film on a three-month hold while they decide whether to commit, but landing Pitt could be a majorly convincing factor. The A-lister has recently built a reputation for pushing troubled projects through production (see: Moneyball, next year’s long-awaited World War Z), and Disney might be more willing to invest in a sci-fi spectacle with a reliable box office star on hand.

No word on Pitt's degree of interest, but If Fincher can land both him and another big name to play Captain Nemo (and c’mon, it’s David Fincher; someone who fits the bill must be dying to work with him despite his reputation for grueling shoots), it seems likely that 20,000 Leagues will eventually rise from the depths.