Have you all gotten over the groundbreaking expose on Marvel's more memorable misfires? Ready to unbuckle your reading buckles? WELL STAY YOUR COLLECTIVE HANDS! I'm not done with you. I'm never done with you.

Yes, collected here are some of DC's more ridiculous villains that for some inexplicable reason keep returning. Again, in order to avoid this being a Greatest Hits of the Silver Age list, only villains that DC really tried to make work will be included. So get ready, because this time you'll believe a moron in spandex can suck. 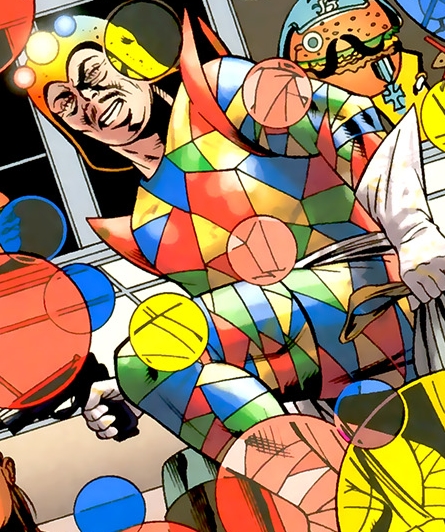 Is... is that a hamburger with a mustache?

A painter blinded by a gunshot wound was driven mad after an operation to restore his sight leaves him only able to see bright, disorienting colors. Donning a flamboyant costume and light-up mind control helmet, he became exactly what Pat Robertson thinks gay people are. His first appearence was as a villain against a group called the Boy Commandos where he actually didn't turn out to be a pedophile despite that mustache.

Usually considered one of Batman's goofy Silver Age rogues, Crazy Quilt was actaully one of the few villains to have a bigger hate boner for Robin (and still not a pedophile). Having endured as a running joke through most of his career, the same thing happened to him as did all goofy Silver Age characters: later writers felt the need to make him badass. 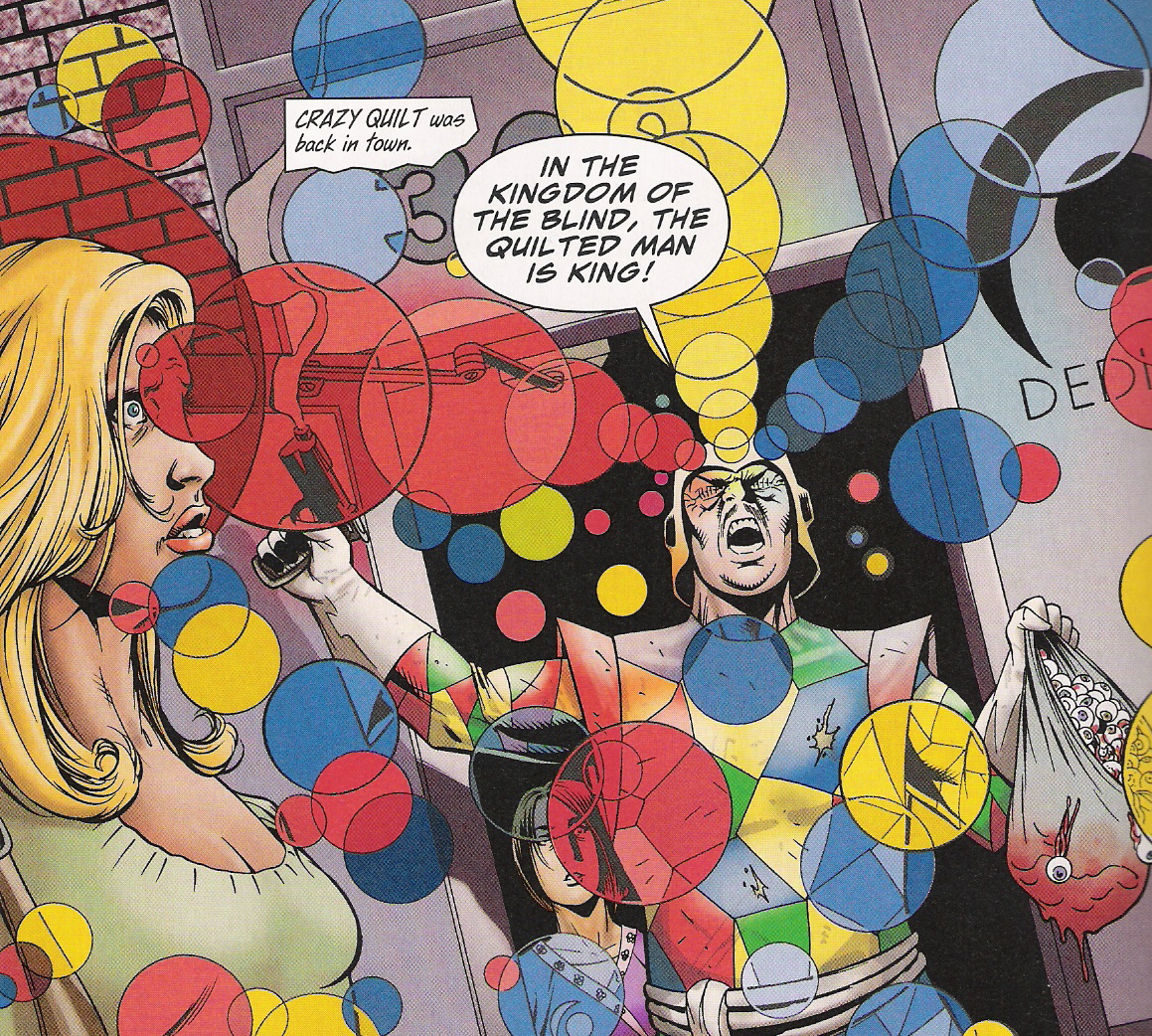 See, it doesn't work! Is it the nonsense quote? The shoulder pads? The waist sash? Rhetorical question: it's everything. True, this must have been played for laughs (If you didn't laugh there, you have no soul), but the point is still valid. Even with a Big ol' Bag of eyes, Crazy Quilt is still as goofy as ever. Silver Age villains have been made awesome, i.e Riddler and Mr. Freeze, but Quilt can never have that. He's a victim of his own craziness.

Ghosts. At their worst they're dead people who inconvenience you by slamming doors in the middle of the night when they know you have work in the morning. Gentlemen. At their worst they're cads who parade around with that trollop Elizabeth Mooringhouse on their arms at the Winter Social. The nerve of it. So you can understand how formidable it would be smush them together into one be-monocled phantom fop.

Originally a highwayman killed by an incarnation of Hawkman, James Craddock was retconned as a poor criminal who was hanged and resurrected as per a gypsy prophecy. Now stuck on Earth, the polite poltergeist began a new life as a thief, because if there's one thing a ghost needs it's wealth. 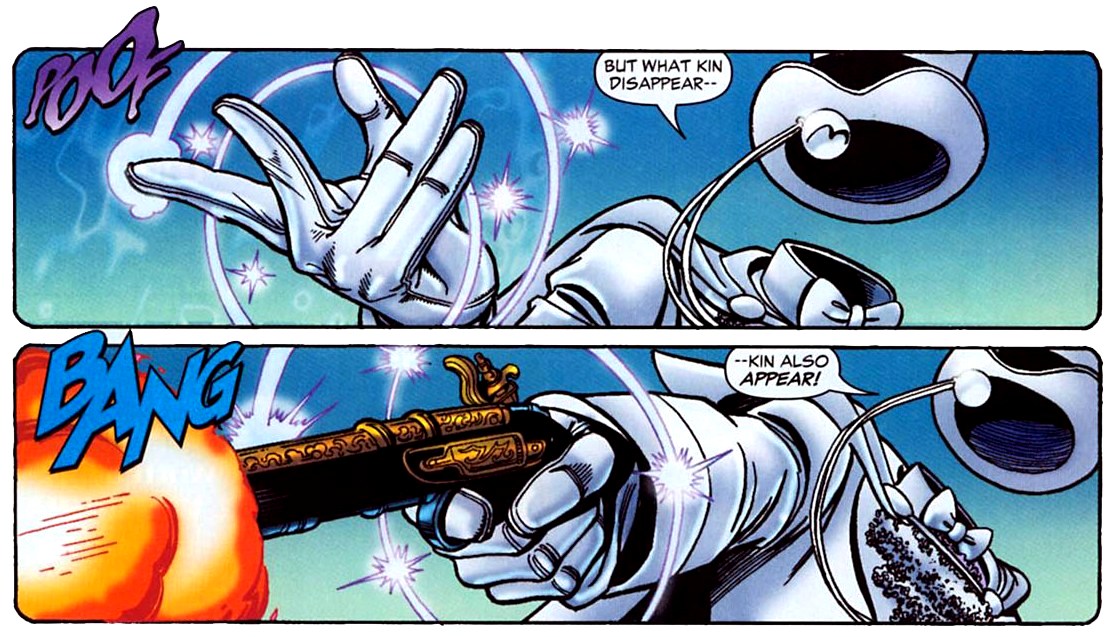 Armed with obsolete, wildly inaccurate flintlock pistols and vague ghost magic, Gentleman Ghost has annoyed everyone from Batman to a few of the Green Lanterns. What's that? Those aren't fair fights? No, no they're not. That's why Gentleman Ghost has remained something of a background villain most of his career. His only notable triumphs are his recent New 52 fight with Hawkman, beating up grandpa Green Lantern Alan Scott, and a clash with the JSA awhile back that saw him destroyed by... Wildcat. 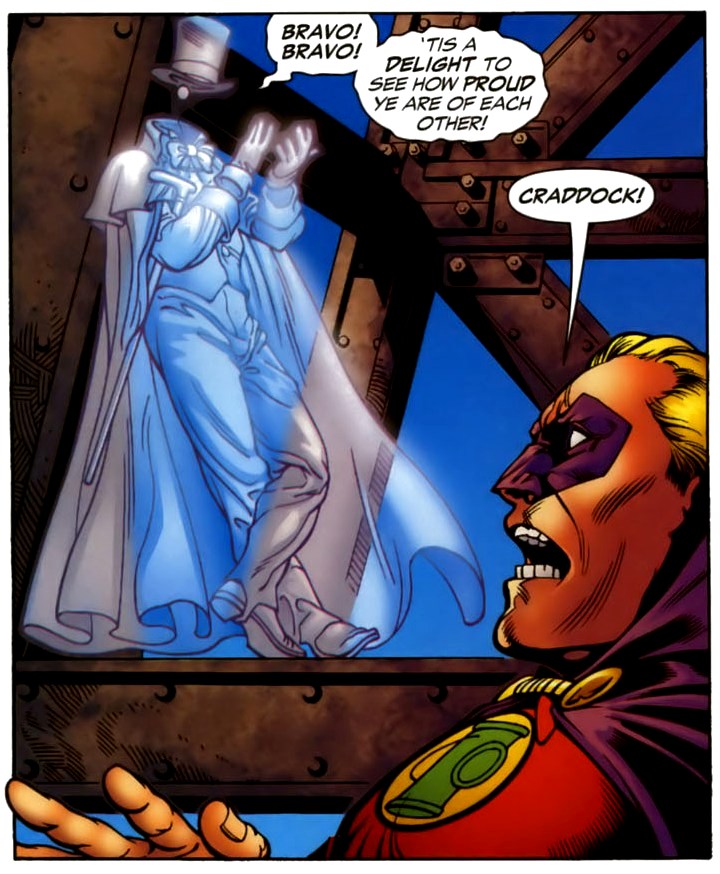 "YOU'VE DRIVEN SLOW IN THE LEFT LANE FOR THE LAST TIME, OLD MAN!" 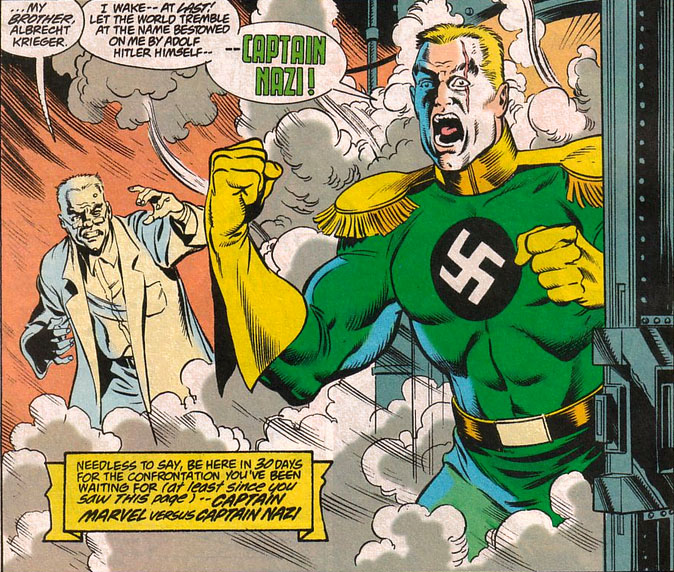 Originally a Fawcett Comics creation, DC reintroduced him in the pages of Shazam!. Basically Captain Marvel with frilly shoulder pads of hate, Cap'n Third Riech reappeared as a super strong, flying, primary colored Nazi cliche every few years. Popular enough to be a reoccurring character, for some reason the living personification of genocide and fascism never really took off into the mainstream.

Cap Nazi has been retconned more times than Nazis have been used as bad guys. He's been Hitler's Superman, a Neo-Nazi given powers by a secret society, an WWII era super soldier left frozen in suspended animation like another Captain we all know, and the living personification of national socialism. Really.

Hey look, a lady Crazy Quilt. Looks like she disapproves.

Nazi has a hard time with it. He's been beaten up by virtually every superhero with the word 'Marvel' in their name, not to mention getting his eyes poked out by Catman for god's sake, then being 'killed' by Jason Todd via his brand new cyber eyes. Probably a bitch and a half getting those shoulder frills washed too.

What I'm about to tell you was actually published on real comics by real people. Originally a Wonder Woman villain, Egg Fu was a giant egg-shaped Chinese man who used his mustache as whips against his enemies. Are you still here? Did you have to walk outside to take it all in? Is your grasp on reality intact?

Now in fairness, he existed in a time when comics and racism went hand in hand. Like peanut butter and hate jelly. It actually explains this page's lack of r's:

Egg Fu existed for a time in a weird limbo, coming back as a quick reference here and there, writers always trying to reinvent him as something less ridiculous than a giant Chinese egg man. For instance, it was once explained he was a giant carnival ride made of Apokoliptan technology accidentally left on Earth by a visiting Mr. Miracle. See? Gritty, gritty realism.

However, Egg Fu was most recently reinvented as a weird robot/egg monster who doubles as a brutal mad scientist. Like some kind of cross between Sugar Man and MODOK. It's a change that seems less contrived and somehow weirdly works.

Although I kinda miss the whip mustache.

Let's not mince words. Flash has one of the goofiest rogues gallery. A mean gorilla, a boomerang obsessed Aussie, a parka wearing captain, a mirror guy, and guy who's thing is "weather". Big Sir? Big Sir is on a whole other level.

Dufus P. Rachett (wwwwwwwWWWHHHHHHAT?!) suffered from a glandular problem that allowed him to grow to a ginormous size but left him mentally retarded. No, this is all canon. He was lured by most of the villains mentioned above into a powerful suit built by the god-like baddie, Monitor, and was told Flash had killed a mouse. Enraged, he set out to murder Flash.

Big Sir was brought back in the often comical pages of Injustice League where he was, again dear readers, an incredibly powerful person with a child's intelligence. He and his friends went through ridiculous adventures including briefly becoming the Justice League Antarctica where they did battle with flesh eating penguins. 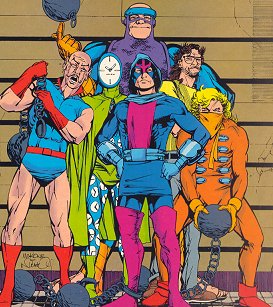 Eventually arrested on a misunderstanding, Big Sir joined the Suicide Squad (which, by the way, is too heavy a team for a character like Big Sir to be on) in the usual exchange for a pardon.

On his first mission out, he had to capture a dangerous life form disguised as a human child. Sir thought it was a real kid and picked it up. It exploded. Big Sir, the mentally handicapped man in a super suit, died in the blast.

That's... that's some Of Mice and Men shit right there.