Dead Rising 3 Review: One vs. One Million

By: Josh | Xbox One Reviews | January 22, 2014
The moment you walk outside for the first time in Dead Rising 3 and lay your eyes on a massive freeway crushed by a commercial airliner with thousands upon thousands of zombies filling in the gaps, you may have to find your jaw that just fell on the floor. It's one of the few games that made me feel like the new tech was absolutely needed to make such an impressive sight possible. Bringing along a less punishing game and the franchise's trademark goofiness, Dead Rising 3 is an easy recommendation for a new console owner.
The franchise's  well known "timed story" has been completely abolished from the normal story mode. While side quests still adhere to a time limit, the campaign will no longer end if you don't make it to a mission in time. This allows you to complete all the side missions within the game and whatever else you want to do without be hampered by time constraints. There is a seven-day timer ticking down which does result in an endgame, but it moves so slowly that it won't impede anything you want to do throughout the game. 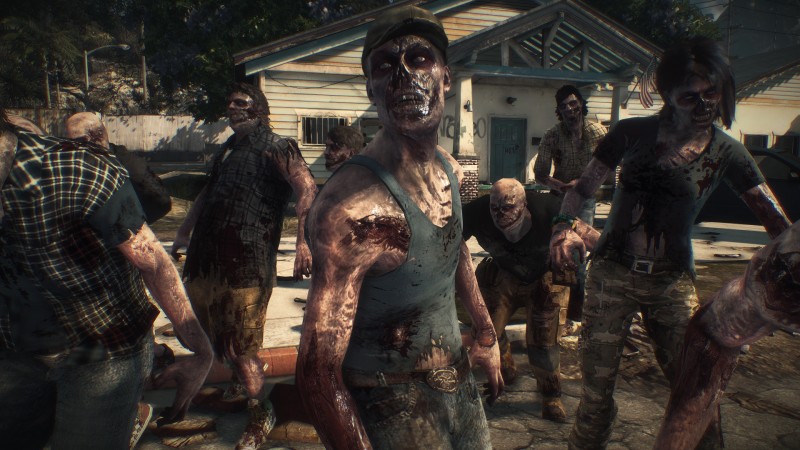 Gameplay revolves around using anything and everything as a weapon within the environment and there a ton of items to use; Ranging from silly items like water guns and CD's all the way to chainsaws and Bowie knives. As you complete objectives and dismember all the undead in sight, you gain PP which gives you skill points you can use to upgrade Nick in various ways like sprint speed and health. One upgrade path makes creating combo weapons much easier, not limiting you to specific items but rather a category of items such as blunt or blade weapons. Speaking of combo weapons, these have expanded drastically from Dead Rising 2, covering items like vehicles and super combo weapons (two combo weapons together). With the increased roster of combos and the ability to create them on the fly, making a wheelchair filled with grenades has never been more fun!
The game also features a slew of actions using the Kinect and Smartglass app. On the kinect side of things, you'll be shaking the controller to get free of any zeds that grab onto you or be yelling "over here!" to attract them into your cleverly set up  trap. Commands like "you're crazy!" are used in boss fights and piss them off to put them in their vulnerable state. It is a bit goofy and doesn't always work great but it's there if you feel like using it. It is also worth noting that almost the entire menu system can be controlled via voice commands and for the most part it is pretty accurate; I used it multiple times sifting through menu choices throughout the game. The Smartglass app can be used in few different scenarios, it can be used as a larger map, a GPS to find a specific store or just some good ole backstory bits. The gameplay portion of this revolves around the app giving you a mission to deposit four pieces of food whenever you can within a safehouse. Everytime you do this, you will unlock a point in which you can spend in the app on either unlocking one of the many supply drops in the town or calling in an airstrike on your position when you're stuck between a rock and a hard place. The Smartglass feature is hardly necessary and I only used it a handful of times, but if you have a way to use it it's kind of neat to see how a second screen experience can work. 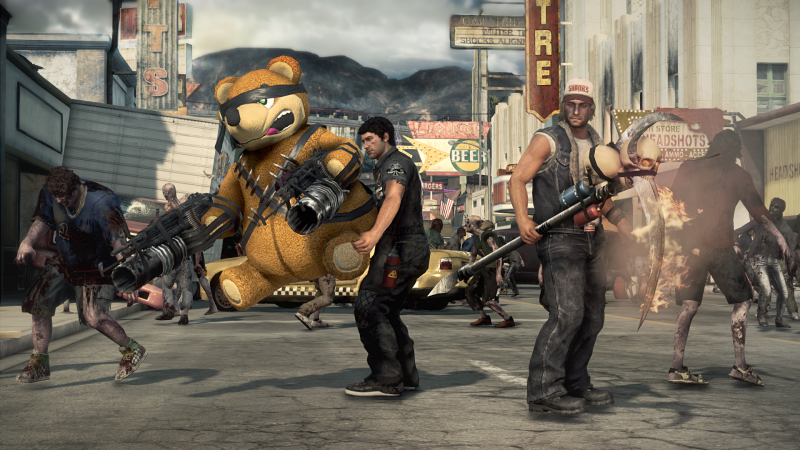 Like before, the game can be played in co-op with the second player taking the role as Dick from the main story. This doesn't add anything substantial to the game but swimming through hordes of zombies never seems to get old when you're with a buddy. Perhaps the best part of the co-op is just how well it's implemented, using a simple drop in drop out system that works smooth so it's easy to join a friend or random person's game.  You can also recruit other AI characters to follow you around during your time in Dead Rising 3, but for the most part you'll want to avoid using them as they are clumsy and just not that helpful. If the more accessible nature of the game turns you off a bit don't worry, Nightmare Mode, which is unlocked from the moment you start the game, is more like vanilla Dead Rising with timers on all missions along with some tougher enemies as well to crank up the challenge like previous games.
The story of Dead Rising 3 is thin but just compelling enough to keep you trotting towards the finish line which has one of the most crazy and wonderful pay offs in recent memory. You play as Nick Ramos, an engineer just trying to escape the zombie apocalypse with all his appendages still intact. The game gives little setup to the outbreak you have been stranded in but that's not a bad thing, it gives a little mystery to an otherwise standard zombie story that  sags in the middle stages. Naturally, you meet some fellow characters along the way (albeit not exactly likable ones) and eventually find a nice quiet spot to discuss just how the in the world you are going to escape the town of Los Perdidos. From here you begin to piece together the true intent of the zombie outbreak which leads up to the big, bombastic and ultimately fantastic finale. 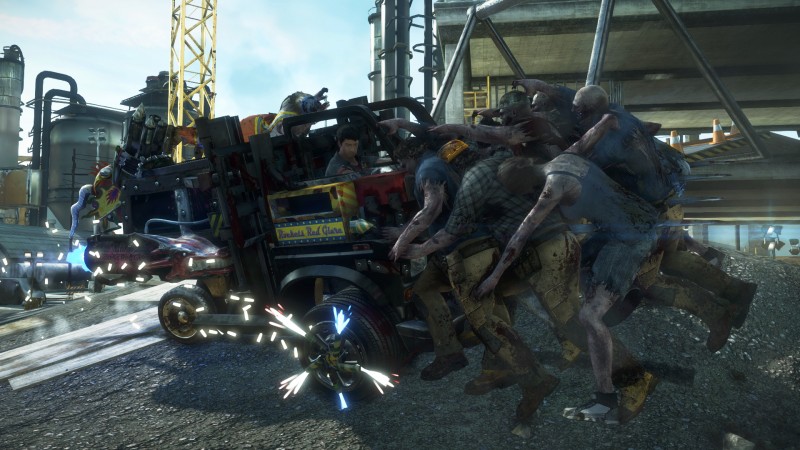 Missions are mostly short and sweet, consisting of maybe one too many fetch quests but there is generally a good amount of variety in the game to keep things fresh and interesting. One of the more notable things about the mission structure that I admired was the presence of choices you can make along the way; It is never given straight to you, but more of a "read between the lines" system that I found really neat and unique. Apart from the main story that plays it pretty straight and serious, there are a handful of side missions that are much more goofy and enjoyable, such as recruiting "hot male" zombies to be in the next big porn movie a fellow survivor is trying to make. Along with these side missions are the psychopaths boss fights which are attached to their own absurdity such as the lady who viciously defends the buffet table from any survivor who passes or the overly erotic police officer who gets off on watching survivors bleed to death after nailing them with her dual pistols.
Of course, the thing you come to Dead Rising for is the absolute insane amount of undead to slaughter, and there is certainly a lot of that to be found as you roam the streets of Los Perdidos. It is not uncommon to see thousands of zombies literally filling up an entire street corner as you furiously slash and slam your way through them. This all takes place in a rather large open world with almost no loading screens and a relatively stable framerate throughout your trip. There's a bit of texture pop-in here or there, but considering the army of zombies that are constantly surrounding you, it's hardly a sticking point. Paired with its visual chaos, the sound design is absolutely phenomenal in Dead Rising 3, every weapon has a distinct sound of gutting, grinding or dicing zombies to bits. A favorite of mine is the talking axe (naturally created with a video game console and battle axe put together) that constantly spews one-liners as you dismember the undead. 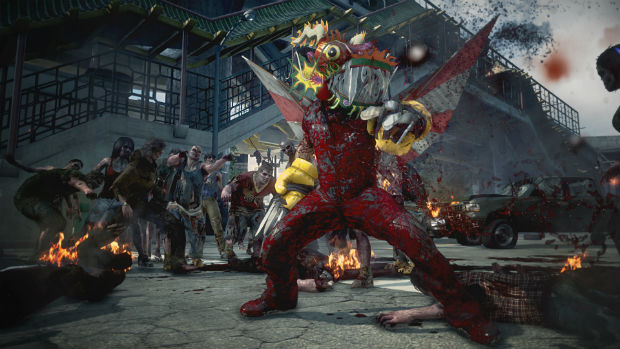 Dead Rising 3 is a fantastic sequel that is an early example of what these consoles can do. The story falters from time to time and the difficulty ranges on the easy side but nothing to take away from all the fun there is to be had in Los Perdidos. Combat remains fun and inventive, putting together two abstract things to make a zombie killing machine never really gets old over the fifteen or so hours the game takes to complete. Whether your choice of zombie killing consists of driving over them with your car or breathing fire on them with your dragon mask, you are sure to have one heck of a time doing it.
Rating
9.0
Pros