"The time has come and so have I..."
By: Jeffrey Dy | PC Reviews - PS4 Reviews - Xbox One Reviews | July 1, 2015
Capcom’s heavy efforts on remastered games continue with Devil May Cry 4: Special Edition. It has been seven years since the original version came out on Playstation 3 and Xbox 360, but this ain’t your typical remaster we have seen this console generation so far. Besides the obvious 1080p and 60 frames per second, new playable characters and a new difficulty are the main events of this special edition along with some minor tweaks as well. After playing the campaign with all the characters, DMC4 is definitely worth remastering with the new additions, but be prepared to deal with the same flaws it had back in 2008.

Nero and Dante’s story and campaign remain the same from the original. Nero and The Order are chasing Dante after supposedly killing Sanctus, but turns out The Order have other plans in mind for our heroes. Then there’s Kyrie thrown into the mix as Nero’s love interest as he attempts to save her from The Order’s grasp. Despite the initial twists and turns, I wasn’t a fan of the storyline back in 2008 and still not today. The structure also remained untouched: play the first half of the game as Nero and then the second with Dante with the infamous backtracking through the levels. Nero’s Devil Bringer abilities and Red Queen revving for more power differs from Dante’s various styles that return from Devil May Cry 3, but he has new toys to play with this one. Backtracking all the way to the beginning was indeed disappointing and still is when revisiting this game.
However, the new playable characters are the stars of Devil May Cry 4: Special Edition if you don’t mind replaying the infamous campaign in different flavors. Vergil is back once again in playable form along with Dante’s comrades Lady and Trish. Vergil gets to play both Nero and Dante’s sections while Lady/Trish’s follows the original duo’s structure. If you played both Devil May Cry 3: Special Edition and the Ninja Theory’s reboot’s DLC, you’ll be familiar with Vergil’s gameplay style. His new concentration mechanic revolves around effectively fighting well without getting hit along with getting the style meter up as seen throughout the series. He is easy to learn if you haven’t played the games recently, but once you mix in Yamato’s Judgment Cuts and Summoned Swords combinations, you’ll be mastering him in no time. Vergil gets a new intro and ending, but that’s it if you anything new in terms of story with Dante’s brother. 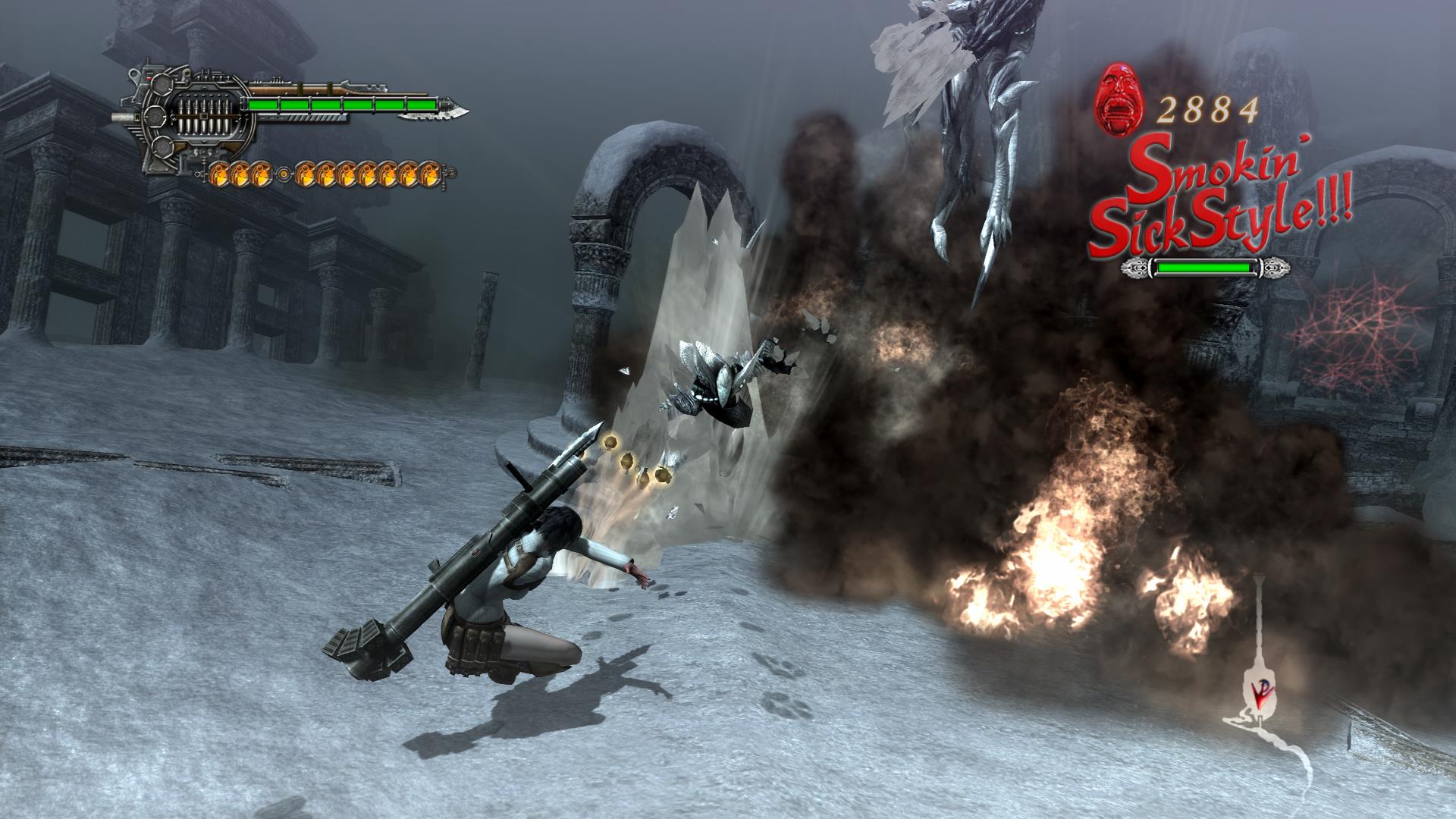 While Vergil felt like familiar territory for fans of the franchise, Lady and Trish’s gameplay are completely different from the other three and arguably the most fun next to Dante. Lady is more firearm-focused with her attacks preferring to stay at a distance launching rockets at enemies and her dual pistols/shotgun if they get close. It took some time for me figuring out to raise the style meter with Lady, but just like Nero, Dante and Vergil, it’s all about varying your attacks and not getting hit. Trish is all about establishing her round trip game and electric punches/kicks to take out the opposition. These ladies don’t have the moveset depth like Dante has, but simplicity is what Capcom wanted especially for newcomers to the series and that’s fine with me. Lady and Trish also have their own intro and ending, but it’s more of a spinoff than actual canon.
If you’re wondering, so many characters to play as in these campaign playthroughs and I don’t start over with each without any upgrades? That is indeed the case in Devil May Cry 4: Special Edition where your collection of red orbs and proud souls carry over to each character (Vergil and Lady/Trish can be started from the get go) along with health and devil trigger meter upgrades. This is useful for the harder difficulties and the new Legendary Dark Knight mode where the enemy encounter rate gets increased tenfold as if you’re playing a Dynasty Warriors game. Bloody Palace is also playable with the new characters once unlocked after beating the game once. Some of the minor tweaks included in this special edition are a turbo mode option, autosaving between missions and more. New costumes for the cast are also unlockable beating the game on the various difficulties.

Devil May Cry 4: Special Edition graphically looks like what you expect from a remaster from a game that came out in 2008, but fans are not obviously playing the for the improved visuals and more for the new content. The framerate rarely dips below 60 frames per second, so it runs well on both consoles and PC assuming you have the recommended specs. At least Capcom themselves worked on this unlike Ultra Street Fighter IV’s PS4 port handing it off to a different developer. The soundtrack also remains unchanged, so the franchise staple rockin tunes are back as well.
Capcom revisiting this Devil May Cry was definitely for the fans with the new playable characters. The gameplay is still DMC at it’s finest even though I did enjoy playing through Ninja Theory’s reboot multiple times, but this is hopefully a sign that Capcom are back at work themselves on a proper “Devil May Cry 5.” DMC4’s flaws from 2008 are still present in this special edition from the infamous backtracking and camera not being your friend in certain situations. For $25, Devil May Cry 4: Special Edition is a great summer game especially all the new content for fans of the series and veterans of the character action genre.
Rating
8.5
Pros