Though Blizzard Entertainment has issued no official statement, it appears that a three year-old rumor is true; a Diablo III expansion is in the works. They launched Reaper of Souls, a teaser site for the expected first expansion to Diablo's third installment.


Whether or not Reaper of Souls is a working title, release title, or something else entirely; expect more from Blizzard during GamesCom next week.


The site doesn't offer much of a tease either. The crypitc background image of a shadowed stonewall with a starry night lurking behind an archway doesn't foreshadow much, however a quote superimposed over the image gives a better glimpse of what to expect. 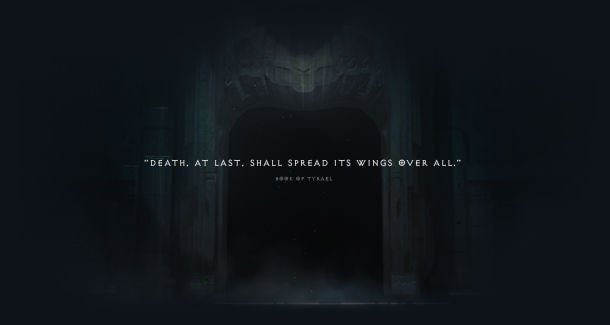 "Death, at least, shall spread it's wings over," from the Book of Tyrael. With Diablo slain once more at the climax of Diablo III, perhaps all that is left to fight are the fallen angels from the series.

Leaked by MMO Game Site three years ago, this product slate for Blizzard has an expansion for Diablo III projected for the second quarter of 2013. Granted, since the game was released in the second quarter last year we can expect the release schedule to have been altered as well. Nonetheless, we have our first inclination that something is in the works fifteen months after launch.


As reported by Joystiq, Blizzard Entertainment CEO Michael Morhaime stated in a conference call that an expansion for Diablo III existed, but no timetable for release was given. "I think the most important thing for us always comes down to the quality of the expansion and the gameplay, so that will be a big factor in terms of driving our schedule," said Morhaime.


Diablo III is also set to invade the living room with a released slated for September 3rd across the Xbox 360 and Playstation 3 platforms.