The season premiere of Falling Skies wasn't at all like what we have been used to from the series, and that was a good thing. "Worlds Apart" gave us a multi-layered story with a structure that showed some creativity. The episode kept me interested for most of the hour, and there was no shortage of aliens (the real ones).

The story started with a confrontation opposing Second Massachusetts' teenage soldiers to skitters (and their "mechs"). The young people are led by Hal Mason whose brother Ben ignores orders and accidentally injures their father, Tom Mason, who suddenly reappears in the middle of the gunfight after three months away from his family and friends. Falling Skies is centered on Mason, Noah Wyle's character, so there was not going to be even a single episode without a lot of him, wounded or not. The brilliance of the premiere was to use his injury to put him center stage, carve out his own storyline, away from the Second Mass and their own troubles. 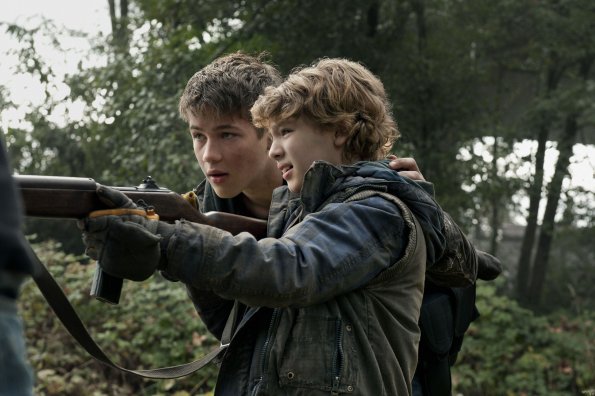 Last summer, for all the excitement around the alien invasion in the series, we had our first glimpse at the real aliens only at the very end of the season. Before that, we were entertained by their servants, the genetically engineered skitters who didn't have the gravitas one would expect from beings with a technology allowing interstellar travel. Mason's storyline in "Worlds Apart" got us into a spaceship and we witnessed the first conversation between human and invader. On the one hand, it was business as usual for an alien invasion story: The invader seemed to distance himself from the concept of "oppression," saying it was in human nature, and implying that they were simply reproducing what we are used to doing to ourselves. In other words, humans are bad and although aliens are behaving very badly, it is not in their nature! On the other hand, it was interesting how the alien spoke as if they were doing humans a favor by taking over the world. And for the body takeover, he (or it?) framed things as if it was a relationship in which the human had a say ("She is allowing me to speak through her").

The science-fiction in Falling Skies has never really been an issue, and here, watching the tall alien speak through Karen showed how well thought out the whole alien technology framework is in the series. Of course, as soon as Mason left the spaceship, things were much less interesting, even if it was intriguing to see that all the other human captives were killed on the spot. The young girl with the bike only seemed to exist to allow Mason to reach Boston, which wasn't so bad but could have been better if she didn't use a lame excuse to go away as soon as he was "home."

The drama around Dr. Glass and her new patient was well done, with the heart-pounding frightening moment involving the stumping mechs standing out. Pope pointing out that there was something odd about Mason's return was a relief, as I was starting to wonder if everyone has been drinking the Kool-Aid. Don't get me wrong, I like a little bit of hero worship like anybody, but in season one, Tom Mason was never perceived by his peers as the hero he was laid out to be in "Worlds Apart." Yes, he was Weaver's second-in-command and had the survival of the whole group at heart, and even had that straight arrow aura about him, but here, celebrating his return like the Second Coming was uncomfortable. 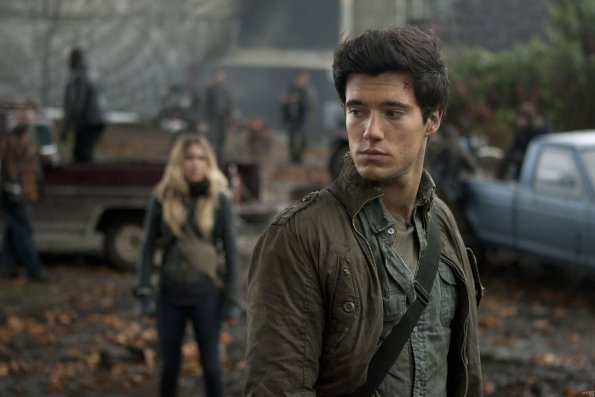 In fact, the episode's weakest moments (which were only a few) can all be found in what happened around the Second Mass while Mason was dreaming his way back to the camp. Chief among those is everything around the insulation for cars and (to some degree) Ben Mason acting up, or if you prefer, acting as usual. Which brings me to one of the most refreshing things during the hour: One of my issues with the show throughout the first season was how the Mason children were portrayed and how the story didn't do too well on the family drama involving them. In "Worlds Apart," the oldest son, Hal, was clearly improved. Drew Roy portrayed a teenager growing into some responsibilities with the right amount of detachment to make him "cool" without seeming removed from what is happening. He also had much better lines, with the right amount of wry humor ("I might do something crazy like open a door for you") and less of the melodrama of season one. Let's hope things remain that way going forward.

During the first season, the show tried to give us a feel of what a post-invasion human world would be like, with its heroes and its opportunists. There were creepy and ultimately interesting steps toward showing us alien technology, but all that was done within episodes that were tragically below their potential. The simplistic episode pattern with unambitious missions could have worked, but was sabotaged by the story's focus on the Mason family. The show tried very hard to be a story about a family in dire circumstances and only had a limited success achieving its goals. "Worlds Apart" clearly still has the family focus, but it fits in a broader narrative and a bigger, more ambitious story. There seems to be clear signs that the aliens have a plan, so the premise is more promising, but given what happened last summer, I wonder if this wasn't just another strong premiere bound to usher in more tepid efforts.