Fallout 4 Officially Announced, Coming To PS4, Xbox One and PC

"The Long Wait is Over..."
By: Zack Zwiezen | PC News - PS4 News - Xbox One News | June 3, 2015
Fallout 4 is no longer a rumor. Bethesda has officially announced that it is indeed a real game that is really being made. Alongside the announcement of Fallout 4, Bethesda has a released a reveal trailer for the newly announced Post-Apocalypse RPG. You can watch the trailer below.

The trailer looks like it is using actual in-game footage, possibly even real gameplay. Which is nice. I've seen some people are disappointed with the visuals, but honestly this looks great to me. Colorful and filled with variety.
I think Fallout 4 is game that should look good, but those looks shouldn't come at the cost of a big open world filled with tons of quests and characters. The graphics quality shown in the trailer looks totally doable on PS4 and Xbox One, which is a nice change from trailers like Watch_Dogs. Those trailers were basically hopeful lies. This looks like an actual game that could actually run on modern consoles. And what I see has me excited. 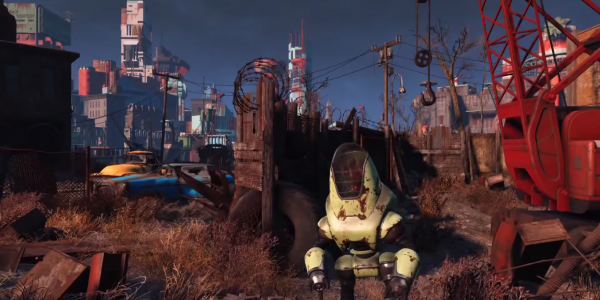 No word on a release date and no real information on the story or setup for Fallout 4, but Bethesda is promising to reveal more at E3 and it sounds like we will be getting a nice and long gameplay demo at E3. So I can't wait to see that. Now the real question: Will Fallout 4 come out this year? Or is this a 2016 game? We will have to wait for E3 to find out.
Fallout 4 is coming to PS4, Xbox One and PC sometime in the future. Tune in to the Bethesda E3 Showcase on June 14th to find out more and to see more about Fallout 4. You can also read our preview of the Bethesda E3 event.