Doesn't it always feel great when you find out that someone hasn't seen a film that you absolutely love and you show it to them? Well, that's the plan here in this new column, where all of us here in the Entertainment Fuse Movie section will suggest a film or series of films, that will expand peoples viewing choices and explore various genres in cinema from all over the world. In this edition, I'll be focusing on Nicolas Winding Refn, who made huge waves with his 2011 film, Drive. That film premiered at the Cannes Festival that year and managed to make Ryan Gosling an absolute badass, who was able to make a silly scorpion jacket look cool. Before all this happened, Refn made a few interesting films, like Bronson and Valhalla Rising, but one thing he made that made a huge impression on many people, myself included, was the very first film he made. 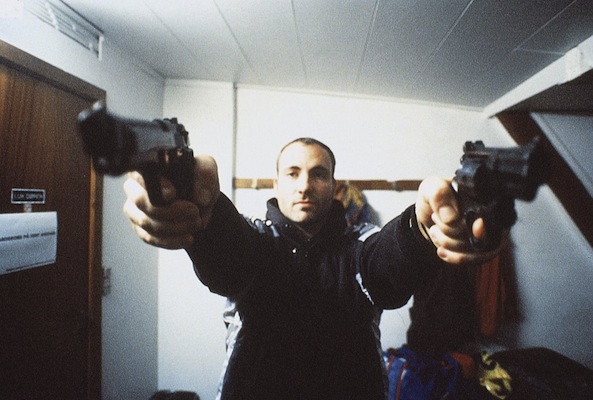 The first Pusher film was made in 1996, after Refn had dropped out of film school and received some money from a short film he'd made that aired on cable in Denmark. The film is centered on a week in the life of a drug dealer named Frank (Kim Bodnia), a low level guy that's trying to find a way to make it to the big time. He and his partner, Tonny (Mads Mikkelsen) get their dope from a Serbian drug lord named Milo (Zlatko Burić), who Frank already owes money to, but Milo gives it to him because he's a good worker. After a deal goes bad, Milo gives Frank one week to try and come up with either the money or the heroin or else he's dead. The raw emotion and visceral energy coming from this film makes it easy to see how Refn has been able to craft a career out of violence and mayhem.

After making a few films that severely flopped in his native Denmark, being close to bankruptcy and suffering from writer's block, Refn decided in 2004 to make two more Pusher films, to complete an entire trilogy. Pusher II: With Blood on My Hands focuses on Tonny, Frank's partner, who has just been released from a stint in prison. He gets out to find that he's a father to one of his former girlfriends and his gangster father, Smeden aka The Duke (Leif Sylvester), who's ashamed of him and wants no involvement with him whatsoever. While close to being almost 10 years later, Pusher II proves that Refn still has something to say and continues crafting one of the gangster trilogies ever made.

Shot right after production had ended on the second film, Pusher III: I'm the Angel of Death, shifts its focus to Milo, the Serbian drug lord from the very first film. The aging drug kingpin is doing everything in his power to stay relevant, with all of the young upstarts trying to move in on his territory and making sure he stays sober. On his daughter's 25th birthday, Milo is trying to throw a massive party for her, while at the same time, getting involved with a major shipment of heroin and ecstasy pills from some Albanians that have no respect for him. This final film manages to capture some insane moments and is extremely fulfilling, after watching the previous films in the series.

Later this year, Refn will be releasing his latest film, Only God Forgives, which reunites him with Ryan Gosling, as a silent but deadly protagonist. The film looks extremely promising, but there's more Refn films out there, if you're willing to seek them out and give them a try. This trilogy defined Refn as a writer/director with a major voice and gave him the street cred to helm something like Drive in the first place. If you loved that film and you're looking forward to the upcoming, Only God Forgives, also with Ryan Gosling, then do yourself a favor and check out the Pusher Trilogy. If these words don't get you to check this out, then maybe this trailer will.