After finding history-making success with The Hurt Locker in 2008, Kathryn Bigelow returns to the Middle East with Zero Dark Thirty, her true-to-facts procedural about the mission that led to the successful assassination of Osama bin Laden in 2011. With a release date set for December of this year, Columbia has released a teaser trailer and first image for what is being positioned as another big awards contender.

We’re not given a great deal with this teaser, which runs only about a minute, but its slick use of redaction across a Middle Eastern landscape is quite inventive and its bursts of action certainly seem to promise a solid outing. In terms of a hook, Zero Dark Thirty is going for the “untold story” angle, referencing the top-level security clearance given to the team during filming. You call it all one big piece of political propaganda if you like, but frankly as long as Bigelow and co. deliver a visceral thriller, I’m there. 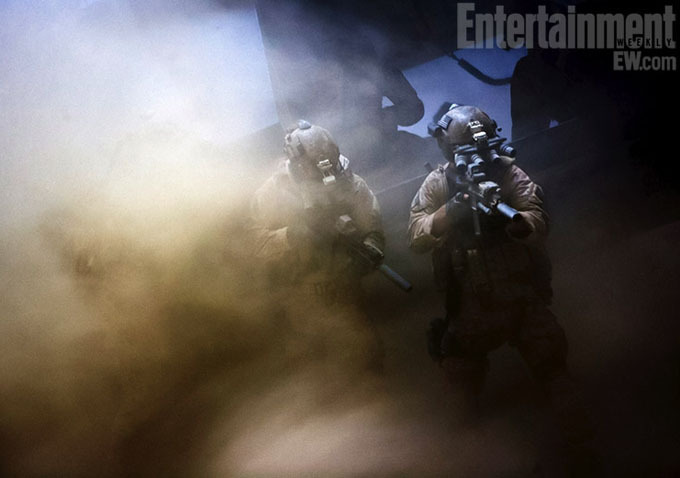 As for the title itself? Zero Dark Thirty is military jargon that refers to half past the hour at a time of, well, darkness. In this case, it likely refers to 12:30am which is when Seal Team 6 arrived at Osama bin Laden’s compound in Pakistan.

Talent wise, Zero Dark Thirty assembles what can only be described as a stellar cast, including rising stars Joel Edgerton, Jessica Chastain, Edgar Ramirez and Kyle Chandler as well as a slew of great character actors with Marc Strong, Jason Clarke and Harold Perrineau. Oscar-winning screenwriter Mark Boal also returns to Bigelow’s side after snagging two Academy Awards for The Hurt Locker.