Five Dr. Seuss Books That Should Be Movies

Dr. Seuss, Theo LeSieg and, in one case, Rosetta Stone, these are all pen names by which the good doctor is known. He gave us 46 classic books over his auspicious career, cats in hats and what Horton hears. With three (now make it four with this Friday’s The Lorax) adaptations to note, which of his broad bibliography (many which have slipped through the cracks) should we connote? So on Player Affinity is where we will sing, what five adaptations the movies should bring. 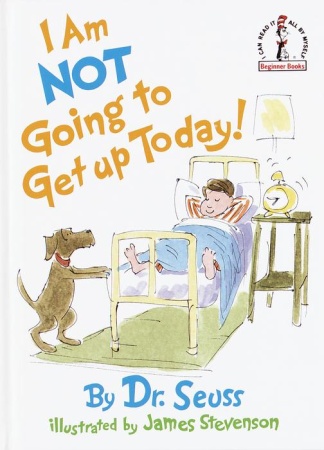 One of the last books by Theodore Giessel (a.k.a. Dr. Seuss) in 1987 (though illustrated by James Stevenson), I Am NOT Going to Get Up Today tells the relatable tale of a young boy who just doesn’t want to throw off those covers. No. Matter. What. And no matter what the world throws at him.

The Idea: A young boy, whose reality is dominated by poorness, feuding parents and bullies at school, does not wake from bed one day but slips into a fantastical dream-like world of his everyday life where he can control the surreal. But soon, he realizes that while imagination is a wonderful thing to have, nothing is a substitute for reality (even if that reality is not always perfect). He finally awakens to worried parents who proclaim their love and concern for their son and eventually uses the confidence he gained while asleep to right some of the other wrongs in his life.

Animated or Live-Action? Begins as live-action and then switches to animated in the dream

Who Should Direct? In his trademark stop-motion technique, Henry Selick should go by way of James and the Giant Peach and craft a melancholy, sweet but visually inventive fantasy.

Who Should Star? Extremely Loud & Incredibly Close’s young Thomas Horn should play the youthful lead and will be surrounded by a colorful supporting voice cast of big-name comedians that come and go as he explores his own subconscious. 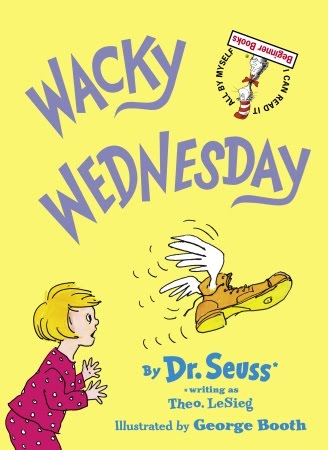 Released under his pseudonym Theo LeSeig (LeSeig is Giessel spelled backwards for the unsure) Wacky Wednesday “all began with a shoe on the wall” (coincidently it shouldn’t be there at all). In this fun, earlier work, a young girl finds that hump day has brought with it a whole lot of craziness and things that just should not be. She encounters 12 wacky, slowly escalating, scenarios as she wanders through town until kindly patrolman Officer McGann tells her to find 20 more before she can go back to bed and move on to Thursday.

The Idea: A 12-year-old girl awakens on Wednesday to find that her world has been turned upside down. Her parents are nowhere to be found and as she hurriedly gets dressed she is approached by her cat (who can now talk) and is told she must find 32 “krazy keys” hidden around town to bring the world back to normal. She later teams with Officer McGann, The Sutherland Sisters and her teacher Miss Bass to solve the mystery and make it to Thursday.

Who Should Direct? Tim Burton will be able to bring his skills as a visual artist to an ever changing alternate reality and interpret the characters in Seuss’ book into wacky versions of their literary selves.

Who Should Star? Elle Fanning would star as the bewildered female lead as she stumbles through this bizarre new reality as she must find the keys and J.K. Simmons should play the oddball, wise-cracking Office McGann. The three Sutherland Sisters should all be played by Ariel Winter (Modern Family) and Miss Bass by Emma Thompson (a la her look in “Harry Potter” as Sybill Trelawney). 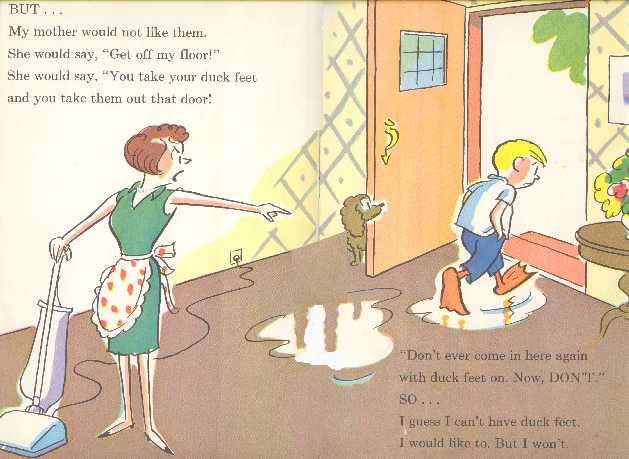 3. I Wish that I Had Duck Feet

Also a LeSeig creation, I Wish that I Had Duck Feet follows an unnamed young boy who envisions the outcomes that would come with sporting a number of different animal-centric additions (the titular duck feet, antlers, a tail, a trunk, etc.) all to the chagrin of Big Bill Brown and his mother as his newfound transplants keep causing trouble around the house. In the end, our protagonist realizes he is fine just the way he is.

The Idea: In this R-rated superhero spoof, I Wish that I Had Duck Feet finds an aspiring 20-something comic book writer who spends more time trying to craft his big break than he does interacting with actual people. This forces away his girlfriend, best bud and parents, putting him on the verge of becoming a social pariah. Awakening one morning, he inexplicably discovers he has the ability to morph his body into any animal, as completely or as limitedly as he wishes. Initially a media sensation as he uses his newfound power to successfully combat crime as “Captain Duck Feet,” the masses eventually turn on him, deeming him a freak and nothing more. Not until the ultimate villain (Big Bill Brown) comes to town with thoughts of destruction do they call once again on their oddball hero. After “BBB’s” defeat, he awakens from his slumber realizing it was all a dream and goes off to repair the damages in his own life.

Who Should Direct? Canadian Eli Craig who helmed acclaimed 2011 horror spoof Tucker & Dale vs Evil should turn his sights to lampooning another genre with “Duck Feet.”

Who Should Star? As loser-turned-Captain Duck Feet, Jonah Hill should star, with Mary Elizabeth Winstead as his girlfriend, Justin Long as his best friend and Richard Jenkins and Julianne Moore as his parents. Finally as Big Bill Brown, Dwayne “The Rock” Johnson will grace the screen as a villain with brawn to spare but carrying serious confidence issues (for which he grossly overcompensates to hilarious effect). 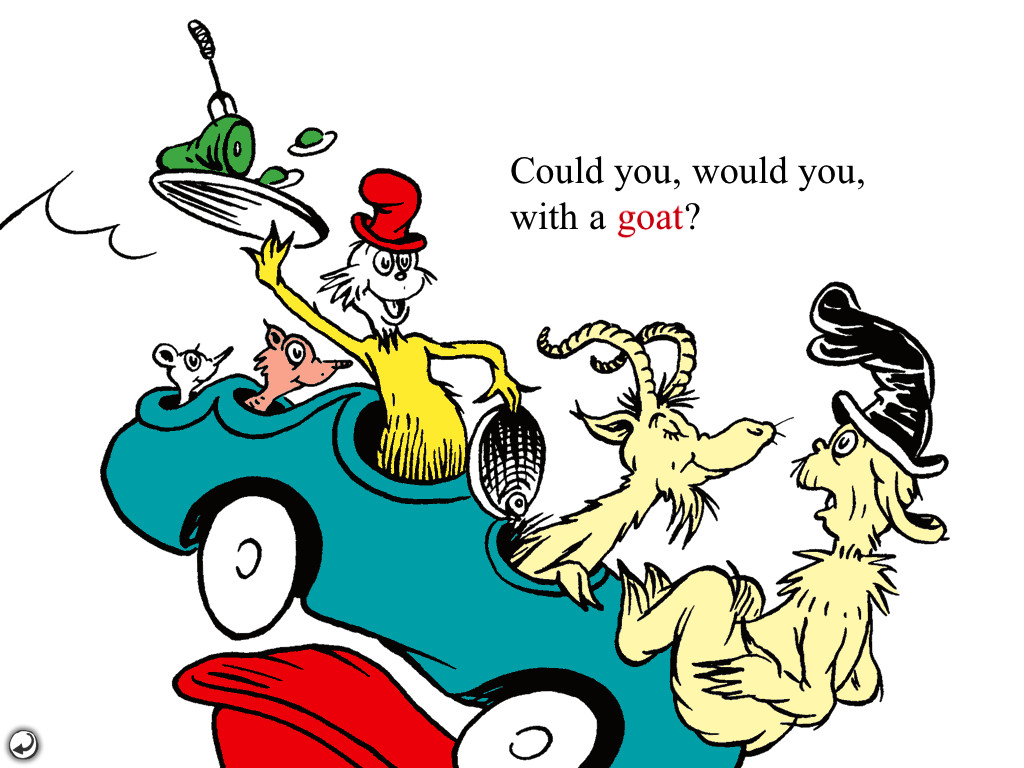 A strange little creature known as “Sam I Am” relentlessly pesters our dog-like lead to try the odd combination of green eggs and ham in every manner of possible consumption, in all thinkable locales and on any (and all) modes of transportation. This is the best selling and most acclaimed of Dr. Seuss’ works and is the fourth highest-selling children’s book of all time. About time for the big-screen treatment, don’t you think?

The Idea: An adventurous, plucky teen named Theodore “Ham” Hamburg dreams of seeing the world and leaving his mundane life behind him. After a mysterious package arrives in the mail, containing a map and a series of cryptic clues, Theo realizes this is a treasure map revealing the location of the mythic “Eggs of Green” which, when ingested, can bring eternal life. Spurred by the mystery of who sent the package and if the eggs truly exist he embarks on a globe-trotting quest to find the truth and on the way teams with an eccentric scientist named Samuel I. Amidon.

Who Should Direct? Pete Doctor’s work on Up showed his capabilities in crafting a whirlwind journey and envisioning a Jules Verne-esque tropical paradise. He should be great here as well.

Who Should Star? Seth Green (though 38-years-old) is great at voicing an enthusiastic teenager and would meld well with what I envision to be a high-energy film itself. Christopher Lloyd should give birth to old coot Samuel I. Amidon and when the mystery behind the communiqué (and the fabled green eggs) is unveiled, Alan Rickman will show up in a memorable supporting vocal performance. 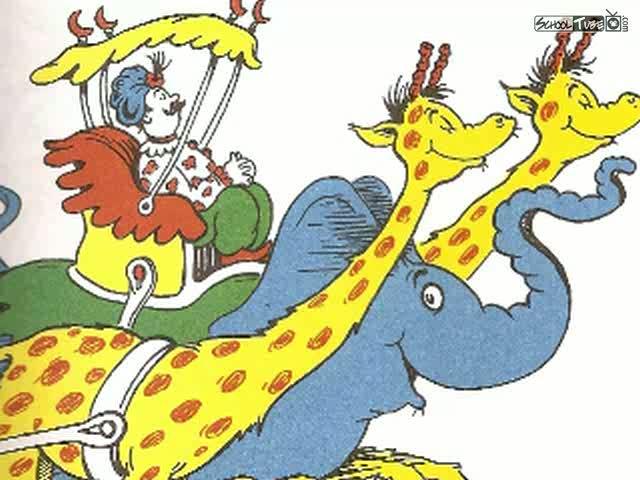 1. And to Think That I Saw it on Mulberry Street

Dr. Seuss’ first ever children’s book, And to Think That I Saw it on Mulberry Street, is a 1937 creation that follows young Marco, who describes the people and vehicles passing by his window in an elaborate fantasy (such as how a horse and a wagon becomes an elephant towing a marching band). All this in order to tell his father the wondrous sights he missed while at work. In the end, Marco simply tells his father what actually transpired.

The Idea: In the days of WWII, Marco (a young British boy) awaits for his father to return home from combat overseas. As he peers out his front window onto Mulberry Street at the growing chaos caused by the conflict, his mother introduces him to his cousin Marie for the first time. She is a girl roughly his age that has arrived from war-torn France after her parents were killed. As the two become close, they pass the dull days by engaging in role-playing, reading fantasy books and listening to comedy on the radio. One night, Marco’s mother hurries them to the basement as a Nazi bomber squadron approaches, but one of the bombs lands across the street causing the roof to collapse. Awakening in a daze, Marco and Mari find themselves unhurt and in a bizarre alternate reality where what they imagine (no matter how absurd) comes true.

Who Should Direct? Brad Bird will return to animation with “Mulberry Street” crafted in a similar period style as The Iron Giant. Pixar will serve as the animation studio, but this will be their first traditionally animated effort.

Who Should Star? Asa Butterfield from Hugo will voice Marco and Anna Sophia Robb, Marie. His father will be shown in flashbacks as voiced by Robert Downey Jr. and his mother by Meryl Streep. Patton Oswalt will be “the man in the cart” and Robin Williams will make his triumphant return to voice work as the horse (among other elaborations).