The Flash – The Darkness and the Light Review

"Keeping the momentum going. "
By: Alexander Wong | TV Reviews | November 4, 2015
After last week’s “The Fury of Firestorm,” I was genuinely excited to see what was coming next for The Flash. The Harrison Wells of Earth-2 finally made his existence known to Barry Allen, and I had a lot of lingering questions about his motivations given the time he’d spent creeping about S.T.A.R. Labs. Needless to say, Tom Cavanagh's appearance as the Harrison Wells of Earth-2 helped keep the show’s momentum going in an episode that also featured romance, comedy, and surprisingly loose definitions of murder. [caption id="attachment_76596" align="aligncenter" width="499"] 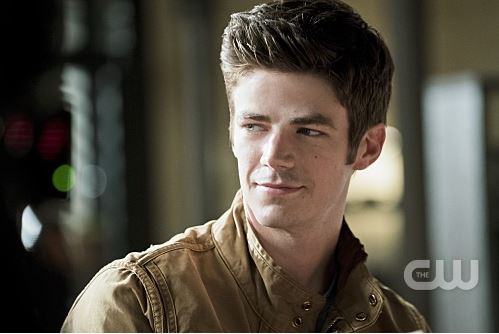 The Flash -- "The Darkness and the Light" -- Pictured: Grant Gustin as Barry Allen -- Photo: Katie Yu/The CW -- © 2015 The CW Network, LLC. All rights reserved.[/caption] As mentioned before, Tom Cavanagh was a welcome re-addition to the show, instantly differentiating himself from the Wells we knew and playing off every member of Team Flash in a fun and antagonistic way. I particularly liked him calling Jay Garrick out for not stopping Zoom, as there seemed to a more personal reason for him doing this in the present when compared to the past (which we later learn is because his daughter was taken by the speed fiend). Who can say how the season will end, but I hope Wells doesn't go so far as to screw Barry over to try to get his daughter back, as I want him to be a permanent member of Team Flash going forward. I didn't realize how much I’d missed Tom Cavanagh until he made a more substantial appearance on the show, and I don’t want to go back. However, there were some slip ups as the episode attempted to give everyone a different reaction to the new Wells (aka Harry). Upon seeing Harry in S.T.A.R. Labs, the first thing Joe does is take out his gun and fire, a somewhat valid reaction based on his experience with Wells and the havoc that he wrought. But Joe was already exposed to doppelgangers earlier in the season, and I find it hard to believe he wasn't able to put two and two together (even if the show tried very hard to portray him this way in "The Flash of Two Worlds"). Furthering the comparison, Cisco had almost the exact same trust issues with Harry as Barry had with Jay Garrick when he was first introduced. It was annoying to see the show rely on this again, but my misgivings were mostly countered by Barry asking Joe if he thinks it's "easy for [him]." Barry's dialogue was a nice way of saying that he won't go down the road of mistrust and melodrama again, and if the showrunners insisted that had to happen at some point, I’m glad it happened with Jay instead of Harry. Maybe everyone should just take a page from the “didn't have the emotional reaction you thought I was going to have” king, Iris West, as even though I'm starting to wonder why they even bother with scenes of asking how she feels (about her mother; about Harry), it’s nice to know that she’s a no-drama zone. [caption id="attachment_76595" align="aligncenter" width="500"] 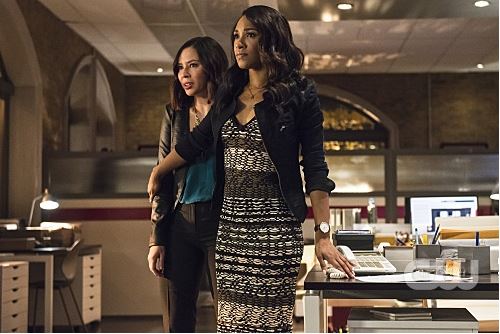 The Flash -- "The Darkness and the Light" -- Pictured (L-R): Malese Jow as Linda Park and Candice Patton as Iris West -- Photo: Cate Cameron/The CW -- © 2015 The CW Network, LLC. All rights reserved.[/caption] Speaking of no-drama, though, the episode did a wonderful job of navigating away from territory that would lead to unnecessary tension and plodding storylines. When Joe gave Iris the gun, I worried it would result in her making a mistake and shooting the wrong person. The Flash has really done right by Iris this season, and each episode simply offers the writers another chance to mess up the good thing they've got going. So good job, Iris. It would’ve been a headshot if not for Doctor Light’s pesky helmet. Another character who benefitted from the series not indulging in melodrama was Patty Spivot. I loved the fact that the series didn't throw unnecessary obstacles in the way of her and Barry's relationship and had the recently blinded Barry still go on a date with her. Not only that, but him wearing sunglasses wasn't a problem because she figured out that he couldn't see her. With the line, “Come on, I would not be a good detective if I couldn't have figured this one out,” I realize I want Patty brought onto Team Flash as soon as possible. That way, the series won’t have a chance to leave her hurt by the fact that this secret was kept from her, and she'll be able to play a more central role in the conflict of the season. [caption id="attachment_76592" align="aligncenter" width="499"] 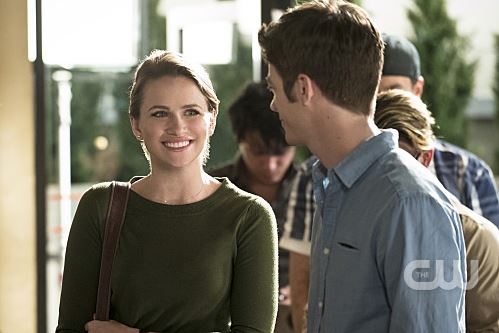 The Flash -- "The Darkness and the Light" --  Pictured (L-R): Shantel VanSanten as Patty Spivot and Grant Gustin as Barry Allen -- Photo: Katie Yu/The CW -- © 2015 The CW Network, LLC. All rights reserved.[/caption] The romantic storylines in the episode were pretty solid, for the most part. As I still don’t care for Jay and Caitlin's  interest in each other, I was happy that Doctor Light's attack prevented them from kissing. And though the episode kind of threw in Kendra Saunders to set up Legends of Tomorrow and provide a romantic interest for Cisco, Barry and Patty’s relationship was pretty cute, especially the line “I don’t want to wait anymore.” To pair with the romance, there was also a great deal of comedy in the episode, although sometimes this was unintentional and forced. For instance, Joe West had probably the funniest expression on his face after he tried to shoot Wells, and Iris looked like she hadn't thought things through when she went up to Wells like she was about to make a big statement, said, "Wells, thank you for helping Barry put away Doctor Light," and then just walked away. However, it was Barry that stole the show. The episode occasionally played his incompetence up too much, but I thought it was great when he walked into a glass screen and looked like he’d stepped into freezing cold water. [caption id="attachment_76593" align="aligncenter" width="499"] 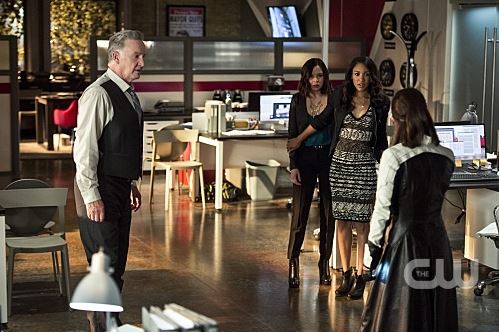 The Flash -- "The Darkness and the Light" -- Pictured (L-R): Tom Butler as Eric Larkin, Malese Jow as Linda Park and Candice Patton as Iris West -- Photo: Cate Cameron/The CW -- © 2015 The CW Network, LLC. All rights reserved.[/caption] I was almost not going to mention the Flash’s final confrontation with Doctor Light. The show consistently overlooks the fact that Barry’s powers invalidate almost every encounter he has, and I’ve previously said that enjoyment of the series doesn’t hinge on the fight scenes being anything more than decent. However, this week’s episode offered a potential reason for why Barry often goes to such ridiculous measures. When he confronts Doctor Light at the train station, he asks Team Flash “How do I stop her?” Perhaps if he listened to his gut, and not everyone’s wacky ideas, he would avoid having to run so fast he caused a speed mirage, only to hit Doctor Light like he should've done from the beginning. The show was past due for another speed ability (the lightning throw was three episodes ago now), but the measures taken to defeat an enemy seem to be getting more and more ridiculous. There’s also the fact that Barry falls for the light-powered ground pound twice, and Doctor Light doesn’t use the ground pound a second time even though she knows this is the most effective way of countering the Flash’s speed mirage. Despite failing to craft a tight fight scene between Barry Allen and Doctor Light, “The Darkness and the Light” was easily one of the most enjoyable episodes of the season so far. It avoided tired storylines, brought back Tom Cavanagh, and made me laugh with the most surprising moments. I still don’t really care about Zoom, but I am excited to see what the show can do when they actually focus on the character. If the name of next week’s episode, “Enter Zoom,” is any indication, I won’t have to wait very long. [caption id="attachment_76594" align="aligncenter" width="499"] 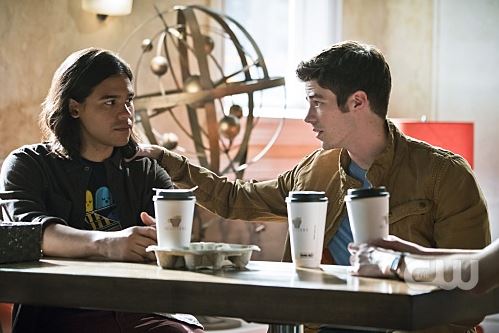