"The brilliant British comedy returns for a final season"
By: Jean Henegan | TV Reviews | May 15, 2019

Phoebe Waller-Bridge has had a heck of a year. Last May, she played one of the only well-reviewed parts of Solo: A Star Wars Story (as Lando’s droid, L3-37). Right about then, Killing Eve, the brilliant BBC drama Waller-Bridge created and showran, was starting to become a phenomenon. This spring, she took the original one-woman show that served as the basis for season one of Fleabag off-Broadway for a sold out run. Now, to cap it off, here’s season two of Fleabag (premiering on Amazon May 17), the final installment in the twisted tale of one woman in London. And it’s absolutely spectacular.

I was a major advocate for the first season of Fleabag back in 2016. It was a smart, hilarious, and touching exploration of family, love, personal growth, and grief. It never tried to overthink things (which so often happens with shows trying to hit the sweet spot of comedy in the midst of complex topics), and Waller-Bridge was never afraid of making her lead appear unlikeable. There were entire stretches of the first season where you doubted the trustworthiness of the narrator, and the reveal at the end of the season threw even more things into question.

After such a successful, and closed-ended, season, it’s not hard to understand why Waller-Bridge didn’t want to do a second (and now, final) season for the show. Season one stands just fine on its own and trying to catch lightening in a bottle a second time would be incredibly hard. Yet, having watched all episodes of the second season, I’m here to report that Waller-Bridge has done it again. Season two of Fleabag is spectacular, riveting, and a show that you will want to binge immediately. 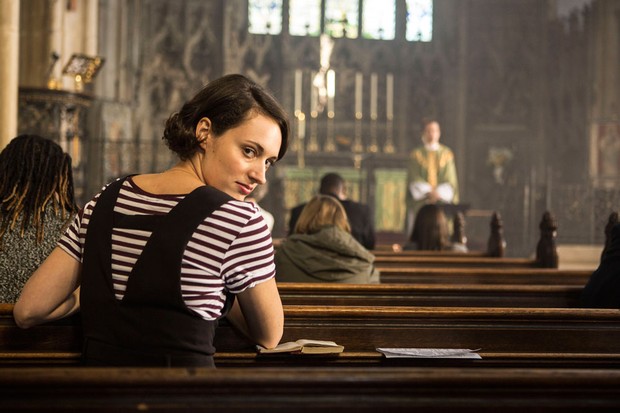 The new season finds Fleabag still trying to dig herself out of the mess that occurred at the end of season one (despite telling us that it’s been over a year since the events of that season). Her sister, Claire (Sian Clifford, once again giving a tour de force performance), continues to blame Fleabag for the kiss between her and Claire’s husband, Martin (Brett Gelman, finding interesting new layers to this scumbag) – even though we all know Martin is the cad here. Fleabag must also navigate the prep for her father (the delightful Bill Paterson) and godmother’s (Olivia Colman, back and in fine form) upcoming wedding. And, in a twist that dominates the season in the best way, Fleabag must also try to reckon with her attraction (and great chemistry) with the Catholic priest set to officiate that wedding.

The story in season two can be classified into two main storylines: Fleabag and Claire’s mending relationship and Fleabag and The Priest’s spiraling relationship. The “Sisters” side of the story feels incredibly true to life. We had plenty of hints back in season one that much of Claire’s ire with Fleabag came from her own personal insecurities and perceived shortfalls. Season two brings that to the forefront, culminating in changes to the sisters’ relationship that are wholly earned and still surprising. While the story is still a first-person narrative from Fleabag’s point of view, Claire becomes a much more fully formed character as the season progresses, helping us to better understand both her and Fleabag as a result. 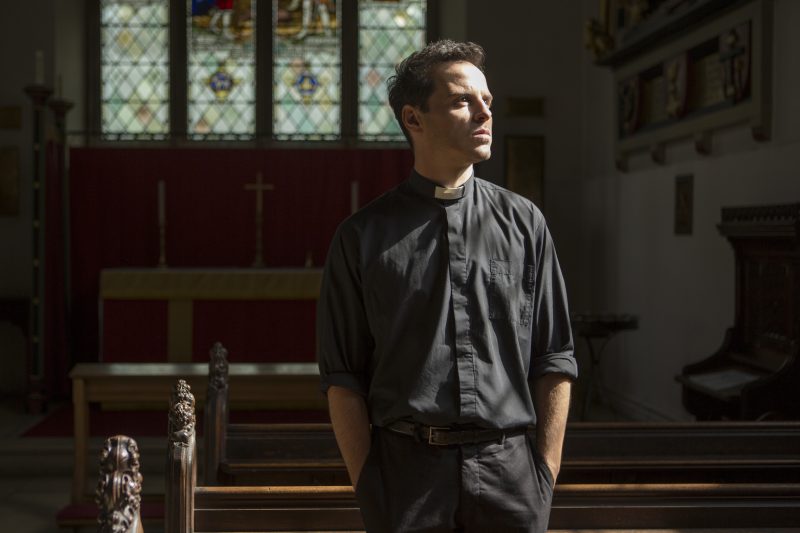 I absolutely loved the Claire-Fleabag dynamic, but the best part of season two was, far and away, the interactions between Fleabag and The Priest (played with so many layers – and a great deal of charm – by Andrew Scott of Sherlock fame). Exploring the attraction between a layperson (and a pretty stringent atheist) and a priest is not an easy thing to do without turning the story into a judgment on religion or the Catholic Church (or fetishising the entire situation). Waller-Bridge manages to walk that tightrope with aplomb, creating a deeply nuanced story that lets us see that The Priest is, ultimately, human, and that Fleabag’s attraction is less of a desire to “fuck God,” (as is suggested by her therapist, played by Killing Eve’s Fiona Shaw, in a spot-on guest turn), and more of a genuine attraction to a really wonderful guy.

I won’t delve into just how deep the relationship between the two becomes, but Scott and Waller-Bridge have such electric chemistry that it’s nearly impossible not to root for their characters to get an entirely unrealistic Happily Ever After. And it’s a testament to Waller-Bridge’s work on the series that we know, instinctively, that the chances of that occurring are slim – just like we know, to borrow from her other excellent work, that Eve and Villanelle are more likely to destroy each other than end up on a beach together sipping drinks (although what a scene that would be). It takes a special kind of writer to create two characters the audience desperately wants to see end up together and in love, but also continually remind us of near impossibility of such an even occurring. Waller-Bridge is truly masterful at this particular art.

Season two of Fleabag is absolutely incredible. I really wanted to savor my screeners, but alas, I found myself burning through them in a single sitting. When I reached the final moments of the last episode, wherein it is made very clear to the audience that this is the final moment we’ll get to spend with Fleabag, I felt great sadness. But she no longer needs to speak with us. Her story is told, and I hope you take the time to experience it with her, one last time.