If we forget the very last scene, "Brave New World (2)" felt every bit like a series finale. In fact, the whole two-part season finale did. From the plethora of high-stake events to the way relationships between the series regular characters were all brought to some sort of satisfactory conclusion, everything seemed to signal an end-of-story narrative rather than your standard end-of-chapter storyline.

The story started where it left off in the previous episode, right after the fight on the rooftop and William Bell's dramatic meeting with his old friend. Astrid is in a hospital and updates the team on her escapade with Walter. I don't know about you, but if I were the cynical William Bell and had already kick-started a chain reaction leading to the end of the world, I would not necessarily save Astrid's life by calling 911. From the hospital, everything spiraled very quickly in a race to save the world.

William Bell was both scary and fascinating. His logic was sound, up to a point. It is tempting to agree with him when he argues that if we have the power to be gods, then it is our destiny to do so. On the one hand, the character had enough gravitas to make such a thing ring true, but on the other hand, he apparently decided to play God as he grew older, grew cynical and grew cancer. Which basically means his own end played a part in his desire to end the world, which in turn makes the evolution of his thought less noble and more dubious, but still entertaining. 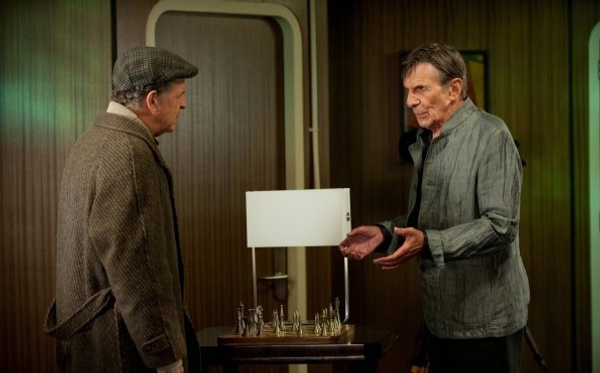 On the chapter of dubious things, one of the major flaws of the episode was in its science. If we forget that September's prison was made of some strange symbol he stepped on (which reeks of magic more than technology), if we accept at face value that there can be an eye of the storm when two worlds collide, there is still Olivia. The fact that a single person could be a "power source" for the universe collapse was a bit wild even by Fringe standards, not to mention the fact that catching a bullet is not quite the same as sending it back with the required velocity to kill. Maybe the latter makes sense (she could control things at the molecular level after all), but I guess my point is that many of those things appeared in an episode that already had too much fringe science and some things felt over-the-top.

What did fit in nicely was Olivia's brain tissue regeneration, since the story prepared us for it last week. The way the episode explained why Bell cut out pieces of Walter's brain was smooth, giving to Walter the ownership of the whole world re-creation concept. The interrogation of the dead was creepy, but clearly showed Jessica's sensory organs were merely used to access the information stored in her brain. Those last two things worked because of events that happened in a different timeline, the "original timeline" as Nina Sharp acknowledged in the finale. William Bell's "flexibility" should also be praised. This is a man who plans to end the world and to be the sole human survivor for a short while. He first accepts his old friend as an additional witness, then he is "happy" to welcome a final human breeding pair that has earned its place in the new order. It is arguably absurd, but somehow flowed well into the narrative.

As it is now customary since the Machine first appeared, Peter's and Olivia's fates were linked in the final showdown. He could see (or was it feel?) things from the Other Side and she could cross-over, making them both uniquely positioned to be the final and measly effort to stop William Bell. I don't mind that Olivia (and not Peter) used to see things from the Other Side, we can't be too demanding, especially considering the showrunners were considerate (or guilty) enough to try and explain why.

Aside from the excellent "Over There" at the end of the series sophomore year, season finales of Fringe have not been the best the show has to offer. "Brave New World" fits right at home in that tradition, but it did a few things from the beginning that set it apart from the other finales, all three of them. There is a clear sense it threw everything but the kitchen sink at us; a purportedly nice and caring mother turned out to a be a villain faster than you can spell her name, two regular characters and an observer got shot, Olivia took her abilities to new heights, William Bell returned in a nastier incarnation, there was a "methodology" that definitely looked like magic, the world almost ended, and there was even a quasi-resurrection. All this in just a couple of hours. 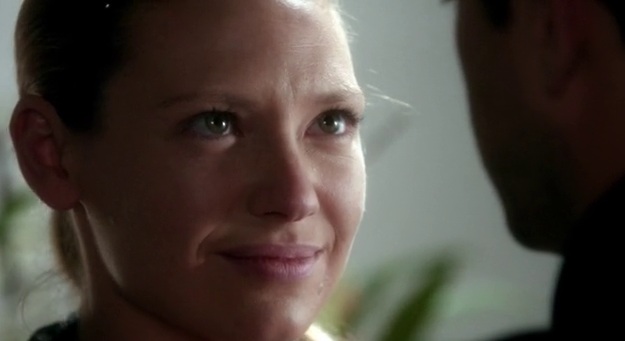 While the kitchen-sink strategy didn't work that well, some aspects of the finale were very effective, especially those that seemed to signal the end of the overall story. Broyles was made a General and got enough funding to hire Nina to head a dedicated Fringe Division science department. The scene of them leaving the Capitol in Washington could have worked in a chapter ending and in a series finale, but not what followed. In the hospital corridor, Walter confirmed he had Astrid's name under control after four years and she took to licorice in a scene that spoke volumes on their evolution and their affection for each other. That is definitely more end-of-series material, and it gets better. Throughout the episode, the recently discovered happy and lighthearted Olivia was gone and our favorite FBI agent was again back into a corner, feeling the weight of the world. By the end of the story however, we not only learned she would now be normal, but that she was pregnant. The final kiss between Olivia and Peter was witnessed by Walter and Astrid in a very and-they-lived-happily-ever-after way.

If we leave out September stopping by the lab to warn Walter in the very last scene, we essentially have a series finale, even if "Brave New World" was smart enough to leave discreet traces of a possible upcoming chapter. There is the fact that William had technology beyond him, there is the wounded September jumping from timeline to timeline, and there is the fact that Olivia is pregnant, all things that could be used to lead us through a story inspired from what we saw in "Letters of Transit". Because the show took on the tremendous task of portraying a character playing God, literally, the season finale of Fringe had a lot to juggle with, and although it didn't always do it smoothly, it had the very distinctive "Fringe" quality to it.