FX has renewed its popular and critically acclaimed animated spy series Archer for a fourth season. The cable network has issued a 13-episode order and has thrown in a 2-year deal with Archer executive producers Adam Reed, Matt Thompson, and their animation studio "Floyd County Prods".

The witty spy spoof is currently averaging 3.3 million viewers per episode in its third season, and has consistently improved its ratings since its premiere on September 17, 2009. The third season, up 32% in total viewers from season 2, made the renewal easy. The 2-year deal with Floyd County Prods has an option for an additional two years. Deadline.com reports that according to the deal, Reed and Thompson will stay at the helm of Archer and get involved in other animated projects developed by FX. 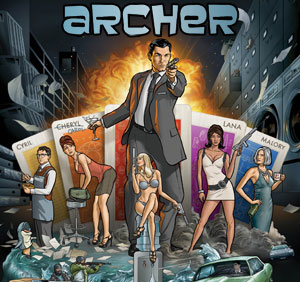