Game of Thrones – Fiery Mother of Dragons in ‘Garden of Bones’

"Garden of Bones" was many things. It was intriguing with the woman on the battlefield who forced the new king in the North to try and justify his actions. It was petty with King Joffrey doing what he does best. It was cunning and noble with Tyrion Lannister wrapping his hand around the seat of power and educating the king. It was even attractively scary with the red priestess. But above all, it was fiery and majestic with Daenerys Targaryen at Qarth.

The episode started on the battlefield. Once the dust had settled, Robb Stark, who seems to have inherited from his father (and not his mother) the unflinching Stark-righteousness, walked among the wounded. After discussing with one of his commanders, he helped a pragmatic young woman bent on cutting the leg of a wounded soldier. The woman's attitude drawed him to her and they had a short, but revealing conversation. What we then discovered was a king in the North that is still a boy in many ways, in spite of his victories and his facial hair. A teenager who is more driven by the events and by his love for his family than by his personal ambition, which is not to say he doesn't have any. These are all things that set him apart from the two claimant kings from House Baratheon. 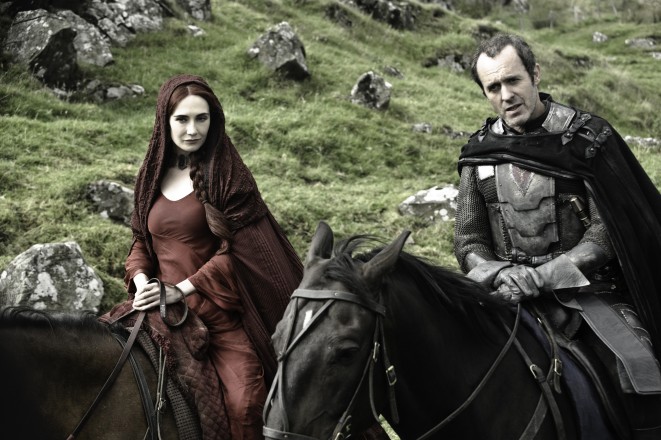 The meeting between the two brothers, or more precisely, their verbal jousting, had Lady Stark break her silence and chastise them as children. Besides a show of force and the education of Lord Baelish by "Queen" Margaery Tyrell on the essence of matrimony, the scenes on Renly Baratheon's lands did two things: they might have paved the way for Jaime Lannister's freedom through Lord Baelish's appeal to Lady Catelyn Stark, and they brought magic in open daylight, or rather, in a cave during a moonless night.

The priestess Melisandre, Stannis Baratheon's advisor and now mistress, is one of the best new characters this season. She doesn't need to say much to grab the viewer's attention. Everything is in her delivery and in the way she easily inspires both attraction and fear. Stannis's man must have felt simultaneously thrilled and scared by her "You want to see what's below this robe, and you will!" He had good reasons to be scared, as whatever came out of her womb wasn't human. The show has been rather coy with its magic so far, but here the story picked the right character to make its next (and, arguably first actual open) move in that realm. The closing cave scene was undoubtedly one of the most thrilling moments of the episode.

Far from the shores of Storm's End, in a story that was much less grabbing, Arya Stark and Gendry finally left the road for the "comfort" of a shared and open cell. Here, the series outdid itself with its most gruesome scenes to-date in a slow moving storyline that only paid off at the end when Tywin Lannister arrived. Like Melisandre, the part is played by an excellent actor who has the right looks and countenance. The lord of Casterly Rock saved Gendry (not out of the goodness of his heart, obviously) and outed Arya as a girl as soon as he laid his eyes on her. As it is often the case in such stories, her disguise couldn't hide her educated brain, and the sinister head of House Lannister seemed to be, for one episode at least, her fairy godfather.

Meanwhile at King's Landing, the boy-king almost had Sansa Stark, his captive and betrothed, whipped on bare flesh in the throne room to avenge himself for her brother's victories in battle. The despicable young king was interrupted by the dignified Hand of the king, Tyrion Lannister, who seemed to dominate the room despite his small size. Later, the imp also cunningly managed to get his cousin (and Cersei's lover) to spy on the Queen for him. While the episode showed Tyrion continuing his gradual rise to power in the capital with his wits and the assistance of the commander of the City Watch, elsewhere, a more independent and fascinating power—radiating only from the person wielding it—was displayed on a land much farther south by a Targaryen princess. 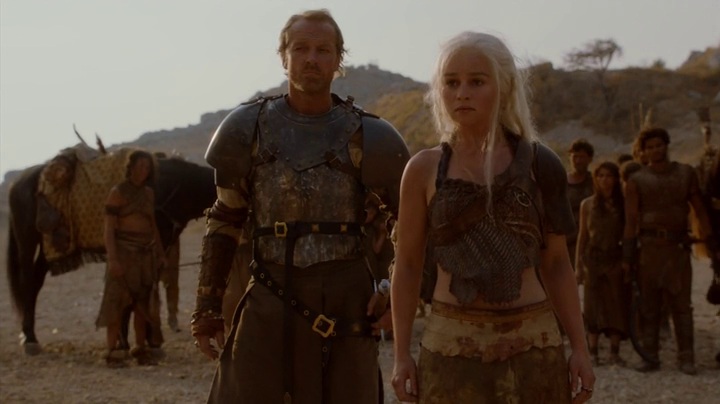 Lately, I have been having issues with many scripted TV series episode titles. Not as often as I would like, the title reflects the dominant theme of the episode, which admittedly might be harder to achieve for Game of Thrones, given its plethora of storylines. More often, we feel the title has some arcane connection with something that happened during the hour, or that the showrunners sometimes just want to tease us with a whimsical reference. Sometimes, there is a fleeting event within a storyline we feel so strongly about that we don't mind that referencing it in the title overshadows the rest of the episode. Daenerys Targaryen in front of the walls of Qarth was such a moment.

The episode is titled after the Garden of Bones, the name given to the desert surrounding the city of Qarth. The garden, which is said to grow each time the town's gates close behind a traveler, is where Daenerys and her Dothraki "horde" are received by The Thirteen, the council ruling the rich city. Everything that passed in front of the town's gates was, in its execution, superior to everything else during the hour, from the initial negotiation to the fiery outburst of the mother of dragons and the intervention of the majestic Xaro Xhoan Daxos. Daenerys Targaryen is clearly still growing into her role, and she still needs her advisor. However, it was obvious to everyone (including to the council's spokesman who wanted to see her dragons before letting her people in) that she has an uncommon strong will. Unlike Robb Stark, her hesitations cannot be mistaken for weakness. What's more, her overconfidence—which could be considered delusional given her difficult circumstances—is still impressive.