I think that it is apt to say that George R.R. Martin is in a pretty safe place financially.  Once his books were made into an HBO series (that has done quite well), his popularity skyrocketed, and now, with the release of the video game coming quite soon, Martin has reason to like how the near future looks.  The coverage for Game of Thrones has been a bit spotty, but from what I have seen, it looks (stylistically) like something like Dragon Age: Origins, but the gameplay system seems to remind me of something like Call of Duty (not in the fact that it is a first person shooter, but in the fact that there are multiple characters that are already set that you may or may not alternate between).

From the information that I have heard, there are two playable characters, one from the Night’s Watch (who will most likely be a warrior/tank), and one character who is a Red Priest, which will most likely be a rouge/mage type of character.  There will be two people from the television series that will reprise their roles in the game, yet they are characters that may not be as big as people may want.  The first of the two that will make an appearance is James Cosmo, who plays Jeor Mormont, the leader of the Night’s Watch.  His role in the first season was fairly light, but I would guess that he would serve as one of the main quest givers for the Night Watch character that you will be playing as.  For the other reprieved role, Conleth Hill will be voicing Varys, who was the eunuch aid to the King.  Varys had a bit of a larger role in the show, but for the most part, was a tertiary character.  With this being said, it will be nice to have some characters voiced by the actors that actually play them. 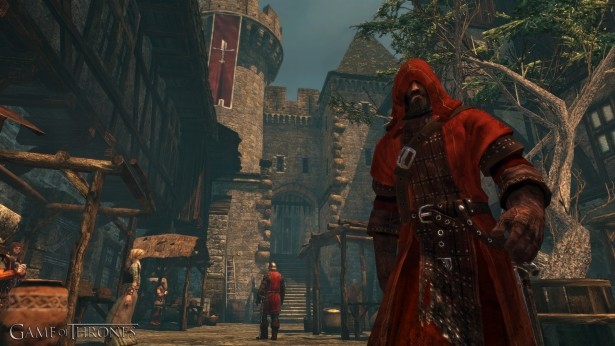 The question that I have for this game is whether or not the developer (Cyanide) will be able to make the game as it should be made.  There has been a fairly large influx of fantasy action RPGs, so I feel like the game will have to be really good in order to succeed, and the track record of Cyanide isn’t necessarily bad, I just feel like they have not proven themselves yet.  I’m not saying that I know for sure that this is going to be a good game or a bad game, but because of the lack of material that they have put up, and the past (games that Cyanide has developed) being the way that it is, I am just a bit skeptical that it will be the game that it should be.

I feel like the material that they have to work on is extremely solid, and if they could do a game where you created your character, chose your house, and then did missions that aligned with that house’s interests, the game could be extremely good, but from what I have seen of the game that will be released, I just have a nagging feeling that they are not tapping into the true potential that the stories have.