Well, I didn't quite get it all right with my prediction last week, but I got pretty darn close. Jon didn't get the Throne - instead he got a trip back to The Wall (the only place he ever truly fit in, if we're being honest), and a really lovely reunion with Ghost (I still can't forgive him for how cold he was to Ghost at Winterfell, but this was a step in the right direction). There was, in fact, a council of the remaining Lords and Ladies of Westeros, and while it produced an unlikely king (although many people had predicted this outcome), it was nice to see some old faces one last time. And we saw the end of Targaryen rule over Westeros . . . unless there's someone out there who might be able to ride Drogon back into King's Landing. But that's a story for a spin-off - or another book series from George R.R. Martin, if he ever finishes this one.

I'll admit it's hard to look at this finale on its own and not take into account the rocky road to get here. Game of Thrones lost so much good will from fans over these past six weeks, and that certainly clouds my take on what happened here - and I suspect it will forever cloud the legacy of the series. I can't forgive it for the missteps it took in not stretching out these last two seasons and giving us the character beats we needed to reach the finale. Ultimately, David Benioff and D.B. Weiss landed the plane. But they did it without a few engines, missing a wheel, and with smoke in the cabin.

As a finale, this was the best we could have hoped for. Dany the Tyrant was struck down (although it took pep talks from Arya and Tyrion, along with Dany giving Jon her best villain speech to get our favorite lughead to act - to the end, Jon Snow really did know nothing). For as much time as the series spent building Dany up, it sure tore her down quickly. Tyrion's speech to Jon, highlighting all the times she opted for fire and blood when taking out those who stood against her vision for the future felt quite a bit like Benioff and Weiss giving us their own speech to explain her quick turn from hero to villain last week: See guys! We've been laying the groundwork for this for years! Just ignore how quickly she decided to burn them all, and remember she's always been a bit quick with the trigger finger! Combine that with Dany's speech to her troops at the top of the episode and you pretty much had to root for Jon to take her out. I don't quite understand why Dany let Jon get that close to her fully armed, though. He just came from chatting with treasonous Tyrion, and he had begged her not to kill the innocents. I guess Dany was just drunk on power and not thinking straight? Oh well. Another weird character beat at this point is hardly a shock. 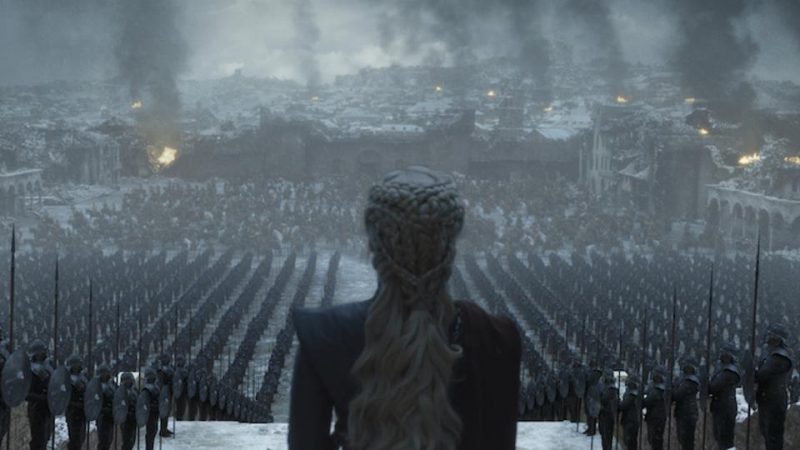 We also got a slightly confusing time jump to set things right in Westeros (yes, the length of Tyrion's beard was a helpful measure of just how long it's been, but boy, that was a bit of shaky storytelling there). I would have loved a chance to see the council coming together and deciding to meet at the Dragon Pit. Who arranged the meeting? Grey Worm? Sansa? Why were Yara and the unnamed Prince of Dorne still on Team Dany - they had to know this wasn't going to be the winning side, since neither of them appeared to have brought their own armies to the meeting. But, after this season, I should know better than to ask questions.

I will say I thoroughly loved the Dragon Pit scene. Edmure giving a speech exalting his (completely inflated) resume for being king and then getting smacked down by Sansa (and having literally everyone laugh about it) was wonderful. Hell, seeing that Robin Arryn grew up into a not completely revolting human was a nice change (quite the glow-up there, a la Neville Longbottom). I do find it a bit odd that Bran is suddenly personable and not purely a human Google, and that he opted to take the throne despite claiming he wasn't really Bran anymore, but whatever. I'll let it pass, since that's all we can do at this point. And the man did manage to put together the greatest Small Council in the history of Westeros. I'd watch a half hour comedy spin-off of that group. Bronn as Master of Coin? Davos as Master of Ships? Love it.

And the ending for the rest of the Starks was pitch perfect as well. Arya going off to explore the West, as she once said she wanted to do. Jon with Ghost and Tormund. And Sansa as Queen of the North (loved the look on Yara's face when she realized that asking for autonomy was allowed - I half expected her to raise her hand and ask for the same deal Dany gave her). While I don't foresee Sansa making trouble for Bran the Broken and the rest of Westeros, it's certainly one thread that remains hanging. Will the next king or queen be fine with the North remaining independent? The wheel might be broken, but that doesn't mean it will remain so in the future. There is a dragon out there, somewhere, after all.

But what does a solid, if not spectacular, finale mean for the series in the grand scheme of things? Game of Thrones will likely be remembered as a cultural phenomenon more so than a great television show. And yes, while it provided some truly spectacular moments and some moving character beats, it wasn't a great show. This final season was never going to make it one, and it certainly has worked to taint how we'll look back on the show as a whole. But it was a special show. It got us all debating week after week. It made us fall in love with characters, knowing that they might die at any moment (or have a heel turn that wasn't fully earned because certain showrunners didn't think they needed more episodes to tell this story . . . yes, I'm still angry about Jaime and I suspect I always will be). But now, our watch is ended. Time to go out and decide what the next great pop culture phenomenon will be. Hopefully that one will have a bit better track record in the end. 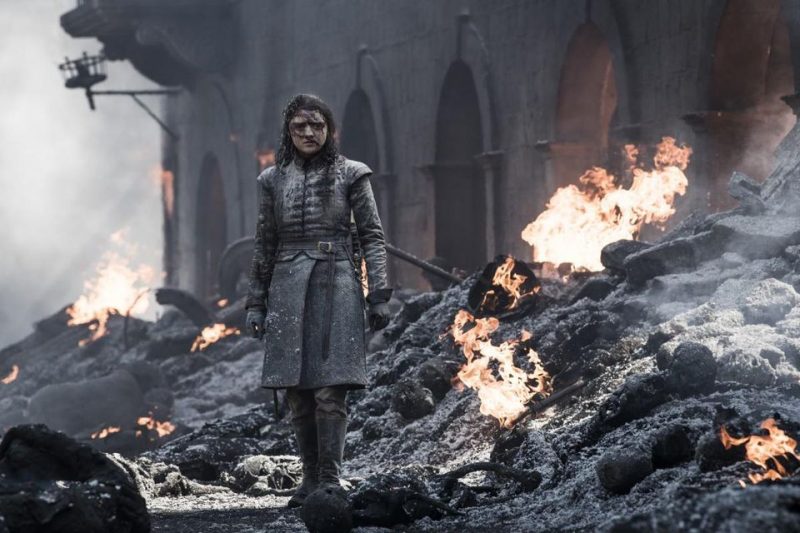 -- First off, major props to Lena Headey and Nikolaj Coster-Waldau for getting paid for an episode where all they did was play their own dead bodies. That's impressive in my book. Get that Game of Thrones money.

-- So, back when my own heart was broken by Jaime's sudden decision to abandon Brienne and ride South, I hoped that she would one day make it back to King's Landing to write his good deeds in the Book of the Kingsguard. I was overjoyed to see that moment come to fruition (seeing Ser Barristan's name in the book was a lovely touch as well), and to see that Brienne took Jaime's place as Lord Commander of the Kingsguard. Out of all the characters in the show, she was the one that really got everything she dreamed of - and everything that she deserved. Jaime was right: she deserved better than him, even if she would have been content spending the rest of her life by his side. Lord Commander of the Kingsguard is a fitting position for the show's purest character. She remained honorable until the end, and I love the idea of her dealing with Bronn, Tryion, and Davos on that Small Council (seriously, that would be the greatest sitcom).

-- I would have liked to see the actual negotiations that got Jon his freedom and removed the Unsullied and Dothraki from King's Landing. Again, the show was truly at its best when it was people in rooms talking (see the Small Council meeting and the Dragon Pit summit - even if that wasn't technically a room - in this episode as proof). Then again, there were so many potentially interesting conversations we missed out on this season, so, what's one more interesting moment lost?

-- Sam dropping off A Song of Ice and Fire was predictable, but still a fun bit of fan service. And Tyrion not appearing in it at all was . . . strangely fitting? After all he did, he still gets no respect. Which somehow makes a lot of sense.

-- One final set of acting kudos to hand out to Peter Dinklage, the heart and soul of the series. Tyrion is, across the board, one of, if not the most, beloved characters in the entire show, and that's due in no small part to Dinklage. Sure, Tyrion suffered some series character assassination these last two seasons (I still don't quite get why he suddenly became really bad at his job and started trusting Cersei, but whatever, they retconned that out of the story pretty quickly in the finale), but Dinklage has always turned in fine performances. I certainly hope he continues to get roles this rich to sink his teeth into. He's a hell of a talent, and he's earned that Emmy he's almost certainly going to win again this year.

-- You know who really did end up winning the game of thrones? George R.R. Martin. I, for one, went from not really caring if he finished the books to really wanting to see where his version of the story goes. This final season highlighted how much can be missed by trimming the crucial character moments and conversations that are so prevalent in Martin's novels (perhaps a bit too prevalent, if we're being honest here). Even if this is the ultimate ending Martin is heading toward, I'd love the chance to see it come about with a greater focus on character. I'd love to see just what the Night King really is. How Bran's powers work. To watch the relationships between characters deepen so that when they bend and shatter, the moments feel truly earned. Will we ever get another book? Who knows. But I really hope we do.

-- And, with that, my writing on Game of Thrones has ended. I want to take a minute to thank you, dear reader, for taking this journey with me. I first started reviewing Game of Thrones back in season three, six long years ago, and while it's driven me to drink at times, I've enjoyed diving into the episodes each week. And I hope you've enjoyed reading these reviews as much as I've enjoyed writing them. Thanks for the comments, the debates, and for your time. It's been, well, not always fun, but it's been a hell of a ride.