Game of Thrones – The Long Night

That was, dare I say, pretty disappointing? For all the hype, for all the talk of the longest sustained battle on screen, for all the warning of painful character deaths, we got that? An hour and a half of quick, confusing cuts (that made it incredibly hard to understand just what was happening- and who was alive or dead), color grading that was so dark you could only make out half of what was going on (I’ve talked to several people since the episode ended and everyone complained about how damn dark it was), and the (ridiculously) miraculous way in which nearly every character we know and love survived, left me incredibly nonplussed.

Let’s start with the directorial issues. Miguel Sapochnik, who directed the episode, has helmed some of the most iconic battle episodes of Game of Thrones: “Hardhome” and “The Battle of the Bastards.” To me, “Hardhome” was one of Game of Thrones finest hours. He knows how to structure a battle: to make it clear what is happening, give characters their hero moments (whether they live or die). This isn’t his first rodeo. Unfortunately, it’s his first night battle, and boy did that show. Sure, Game of Thrones is often shaded way too dark (as are a whole host of other shows these days – this isn’t merely a Thrones gripe). But this was one of the times we needed to see what was happening. I suppose the counterargument would be that battle is complicated and messy, stop whining about not being able to make out everything. But, this isn’t a real battle. This is a fantasy television series. If we can’t see what’s happening, we can’t become emotionally invested in what’s happening on screen. These are characters we’ve spent nearly a decade with. We want to watch them as they fight for their lives.

And you know what also makes it hard to get emotionally invested in a sequence? When the cuts between characters are so damn fast you don’t have time to fully focus and recognize just who you saw. It was, presumably, meant to convey just how quickly the wights were overwhelming our heroes (yet, somehow, not killing them- not even Sam, hidden under a pile of wights), but all it did was pull us out of the action trying to catalogue who was still alive and who wasn’t. Battle sequences don’t have to be rushed and chaotic. We can take time to watch fights unfold, to see characters fight for their lives. We don’t need jump cuts. It’s ok to just show people fighting for extended sequences and make it clear who is doing what. Sapochnik has proven he can do this spectacularly with “Hardhome.” What a shocking misstep on his part here. 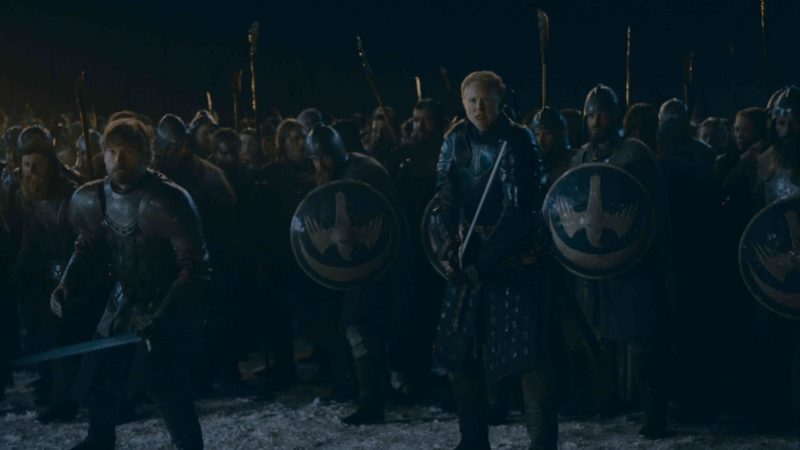 But, directorial shenanigans aside, the most glaring issue with the episode was what I like to call “The Plot Armor Problem.” When I started my series rewatch last month, I was surprised to discover that Game of Thrones‘s reputation for killing major characters might have been overblown. Out of the actors listed in the pilot’s opening credits (17), 11 were still on the series at the start of season eight. Now, after this episode, we’re down to 9. For a series with the reputation of killing major characters, Game of Thrones hasn’t done that. These major characters were protected by their plot armor: they had journeys to complete, things to do, a purpose down the line. They were untouchable. So, there were no stakes when they were threatened. For all the pieces written about how Ned’s death or the Red Wedding “changed the game,” Thrones has kept a tight net over it’s major characters, keeping them safe despite massive odds. This was supposed to be the moment the armor came off some of them. And it didn’t.

The Battle of Winterfell has been teased for years. The fight against the Night King has been teased since the beginning of the series. Everything has been leading up to this moment. We were meant to believe the stakes of this episode were astronomical- this was a fight for the survival of the race of man. We were told anyone could die. And then we were left with a list of the dead that includes only Edd, Lyanna Mormont, Ser Beric, Theon, Ser Jorah, and Melissandre. Probably Ghost? Oh, and a host of random red shirts. You can’t tell an audience “Watch out- anyone could die this week!” and then have the fine print of that promise read: “Except every major character, and most B-level characters, because they all have impenetrable plot armor, so there aren’t any real stakes in this battle, despite us telling you for weeks there would be.” You don’t get to have it both ways, and Thrones might have learned that the hard way this week (not that it really matters, with three episodes left). 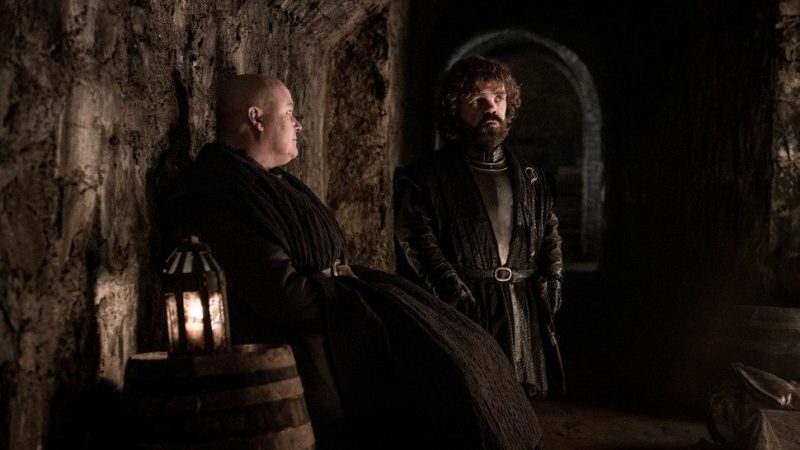 Writing a television series isn’t easy. But one of the core tenants, especially with a fantasy epic, is creating a contract with the audience. The show will provide the audience with moments of incredible magic and mysticism. It will give us a wide range of characters – good, evil, and everything in between. They will grow, change, kill, survive. And, when it comes time for the climax of the whole enterprise, there will be stakes. We will need to sacrifice some of the characters we’ve grown to love for the greater good. War is hell, and good people die. Especially on Game of Thrones. At least that’s what should have happened. At least that’s what we were conditioned, in all the press leading up to this episode, to believe. And, quite frankly, it was a lie.

Perhaps we had it all wrong the whole time. Perhaps the series wasn’t actually leading up to the fight between fire and ice, good and evil, dark and light. Perhaps we were meant to realize that the most difficult moments in the series to date were facilitated by humans against each other. There’s certainly ample evidence that that’s the case. And Cersei is still awaiting the meager number of heroes left at King’s Landing, ready to dole out her own death blow (and, frankly, she looks like the smart one in sitting this out). But if we’ve spent seven seasons watching the Night King amassing power, watching disparate people work together in an attempt to stave off never ending night, only to have the threat extinguished in such an unsatisfying manner, I’m not sure how much I trust Game of Thrones to deliver a satisfying conclusion to the human side of this story. The stakes were supposed to be at their peak this week, yet every character we love survived to fight another day, as improbably as that was.

Don’t get me wrong, I’m happy we’ll get to see Brienne and Jaime spend time together still. That our favorite assassin Arya gets the chance to cross the last name on her list off. That Sansa and Tyrion are still alive. That we might get another ridiculous story out of Tormund before all is said and done. Hell, maybe Grey Worm and Missandei will get that beach front property after all. But I can’t help but feel like the air has been sucked out of the series at this point. Yes, fighting the Golden Company will be another epic battle (presumably in episode five, which was also directed by Sapochnik), but if the Night King and the army of the dead couldn’t kill our heroes, what’s there to make us think humans will be any match for them? Plus, Dany and Jon still have two dragons. And we’ve seen how much Dany loves a good human bar-b-que. 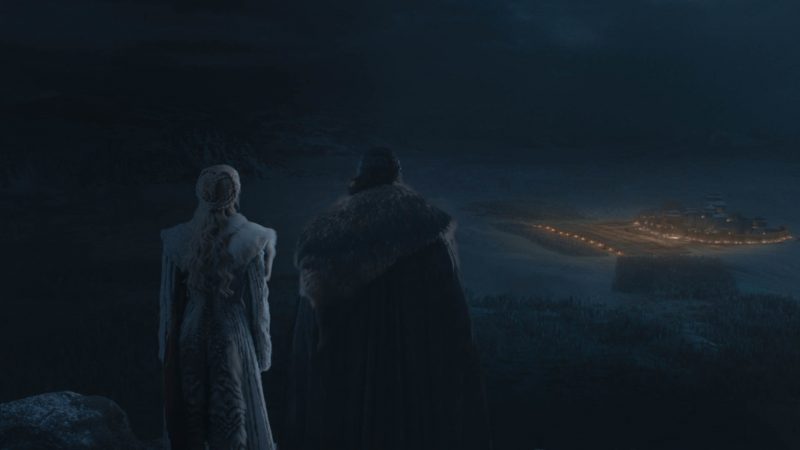 — Lest it seem like I hated everything about the episode, I did love that Arya was the one to kill the Night King, with the dagger that was originally meant to kill Bran, thus saving him. And she used the move she used on Brienne. Solid work there, linking back to the beginning of things.

— And, speaking of coming full circle, Theon’s death was as moving as it could have been (considering I, like many others, have never been able to fully forgive Theon for everything he pulled back in the day). Bran giving him the one thing he wanted – recognition that he is a good person – was a nice touch, before he ran headlong into death. Something he wasn’t able to bring himself to do back in season seven.

— While I was disappointed with the lack of real stakes in the fight, I appreciated that the characters who died were each given a meaningful death. Although, considering so much of the episode was shot to show us that war is hell, it’s awfully convenient that the named dead all died in such inspiring ways.

— So, we were set-up to believe Jon and the Night King would fight it out for several seasons. Aside from a brief aerial battle (that was shot in such a way that it was incredibly hard to tell what was happening for most of it), we didn’t get anything of the sort. Same with thinking those Valyrian steel swords would be necessary to take out some White Walkers. They really didn’t matter all that much, did they?

— Also particularly grating: The set-up of a hero moment for Tyrion and Sansa in the crypts, only for it to be thwarted by the death of the Night King. Also, how did Varys find the only pocket in the crypt without wights? You know what? The whole sequence in the crypts was a mess. Despite some people getting killed, it really was the safest place in the whole castle . . .

— I’ve been thinking this the last two weeks, but I’m going to put it out there now: I have a sneaking suspicion that Game of Thrones might be going the way of Lost. Remember how Lost never really paid off most of the mystical elements of the series, instead choosing to focus on the human stories in the end. Personally, I enjoy character development over mythology payoffs, so I didn’t mind, but a lot of people were angry. Judging from how the show dealt with the be-all and end-all battle with the Night King, I’m worried we aren’t going to get answers to the show’s mythology before we’re through. Prepare yourselves now.