Game of Thrones – The Rains of Castamere: Bloodshed and Betrayal Highlighted by Strong Performances

When D.B. Weiss and David Benioff attended their first Comic Con to promote their new HBO show Game of Thrones, they told fans that if they were able to make it to The Red Wedding, considered by many to be one of the central turning points in the Song of Ice and Fire novels, they would have accomplished what they set out to achieve. With “The Rains of Castamere,” the penultimate episode of season three, ­­­Weiss and Benihoff reach their goal, and in doing so, crafted a fine hour of television that combines strong performances with concise storytelling.

It is notoriously difficult to fully capture moments from a book and portray them on the screen in a way that pleases fans of the original material and still allows newcomers to appreciate and understand what they are seeing. This task becomes even more difficult when the source material is particularly dear to a large portion of the viewing audience. While Game of Thrones has occasionally come under fire by fans of the novels with some of the changes made from the page to the screen, the adaptation of The Red Wedding will not be one of those times.

The episode's writing duties are handled by Weiss and Benioff, who manage to stay true to most of the action that occurred within the novel, while still adding wonderful new details (most notably, the presence of Talisa alongside Robb, further enflaming Walder Frey's ire and also sealing her tragic fate) that only serve to enhance the scene's horrific resonance. In addition to the clear and concise writing, the Wedding was shot by director David Nutter, who chooses to show the events through the eyes of Catelyn Stark, heightening the emotional impact of the scene. But while the beats of the scene may be in line with its written counterpart, the scene itself would fail without the exceptional work of the two actors at its emotional epicenter.

Richard Madden and Michelle Fairley (Robb Stark and Catelyn Stark, respectively) have had relatively little to do this season compared to some of their fellow cast members. As is so often the case with Thrones actors, both Madden and Fairley only need the proper moment to truly shine. 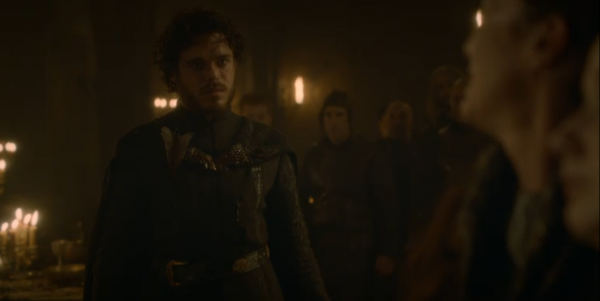 Madden opens the episode by perfectly balancing the gravitas of a king and the insecurities of a boy asking his mother for forgiveness. But it is the silent moment between Madden and Fairley, as Robb looks at his mother knowing both their lives are forfeit, in which Madden truly excels. The deep sadness and pain, and, most importantly, a heart wrenching look of apology stemming from having to make decisions that led them both to this point, flashes across Madden’s face as Robb is struck down. Robb’s storyline hasn’t been as showy, but Madden’s work has been consistently strong, and I find myself wishing (particularly in light of his work tonight), that Madden was still going to be a part of the show.

I have often felt that Michelle Fairley is one of the unsung acting heroes of Thrones. Catelyn Stark is one of the story’s more complex characters - a woman who is consistently overshadowed by the men in her life, and whose sound counsel is often dismissed, forcing Catelyn to see (or hear about) how the poor decisions of those around her have cost her everything she holds dear. Through it all, Fairley has always portrayed Catelyn with a quiet strength and resolve, even when her heart is breaking. During The Red Wedding, Fairley’s facial expressions clearly showed every realization that things were not quite right: the doors are closing, the band begins playing “The Rains of Castamere,” Roose Bolton is sitting too close, with startling clarity. And the piece de resistance, Catelyn’s speech to Walder, begging for her son’s life while holding the life of his wife in her hands, is delivered with such emotion and desperation that I hope, even knowing what's coming, that Walder might take pity on her. But it's the blank look on Fairley’s face as Catelyn slits the throat of Walder’s wife, one of a woman who had finally lost everything, that will haunt me. Fairley did superb work as Catelyn Stark and I am truly sad that Catelyn is dead. 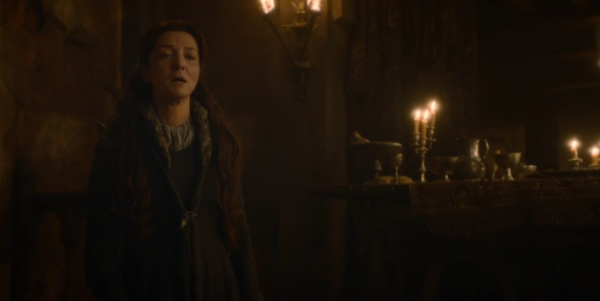 -- While I have a feeling this episode will be forever remembered as the one with The Red Wedding, progress is made in several storylines (most notably Dany’s and Bran’s), setting the board for the upcoming finale - a finale which have the difficult task of topping this episode in terms of seismic storyline shifts. We finally learned that Bran is a warg, and a special on at that, Dany and company easily took care of Yunkai (in rather anticlimactic fashion when compared to The Red Wedding) and Jon is on his way to warn The Wall of the Wildings after his betrayal of Ygritte.

-- The conquering of Yunkai does give us some fun posturing between Jorah and Daario and an apparent alliance between former adversaries Jorah and Barristan. It also appears that Dany is becoming smitten with Daario, something that I’m sure Jorah and Barristan will be keeping tabs on, although for vastly different reasons.

-- We were also treated to several sentences from Rickon, before he and Osha departs for parts unknown.

-- Poor Arya is once again incredibly close by while her family members are murdered. At least this time Arya did not witness the actual deaths, but after being so close to finally reuniting with her brother and mother, this will no doubt be a crushing blow. However, at least it will give us some additional time for Hound and Arya interaction, which, like the Jaime and Brienne relationship, has proven to be one of the season’s best surprises.

-- It appears that the fan theory that Talisa was a Lannister traitor was incorrect, as she is killed in the wedding alongside Robb and Catelyn. While a departure from the novels (wherein Robb’s wife is spared, and not pregnant), it does wrap up Robb’s storyline nicely.

-- Arya isn’t the only Stark to nearly cross paths with family, as Jon is mere steps away from Bran and Rickon (and is saved by Summer and Shaggydog).

-- Bran mentions his uncle Benjen, who disappeared behind The Wall in season one, several times. Is this perhaps foreshadowing that we’ll finally find out what happened to him?

-- In the end, Robb proves he is truly his father’s son, failing to see the betrayal waiting for him and choosing to believe that those around him tell the truth and can forgive. It is a harsh lesson, and one I hope the rest of the Starks will learn before it’s too late for them.

-- Finally, it looks like Blackfish escaped the bloodshed, which is wonderful news, since his humor has been a welcome addition to the show this season.