"Indies Take Center Stage"
By: Josh | PS3 Features - PS4 Features | August 12, 2014
For an hour and ten minutes, Sony definitely found a way to pack in a lot of content into their Gamescom conference that for the most part left me excited for the future of the Playstation 4. They threw in a few facts under the allotted time, but most of it was trailer after trailer of indie titles coming in the near future. Indie was pretty much the word of the day, other than a few already well known triple A titles the conference was dominated by smaller developers; that is certainly not a bad thing either especially with some of the absurd stuff shown.

Right off the bat we were treated to The Tomorrow Children by Q Games, the guys who were previously known for their PixelJunk titles. The game seems to take on a very Soviet Union vibe mixed in with elements of things like Minecraft or Terraria. The two minute trailer was our only avenue into the game but I was certainly enticed of what it seemed to promise. It seems like the game could possibly feature some massively multiplayer elements as the trailer constantly showed countless workers building on a giant robot dinosaur. You read that right, giant robot dinosaur, also robot spiders although I'm not too fond of that.

The show quickly shifted to their next title, The Vanishing of Ethan Carter. Again, we bore witness to a quick teaser and instantly moved on but from what I could tell the game seemed like a murder mystery adventure game.  The look had a striking resemblance to the recently released Murdered: Soul Suspect but that is really all I could gather from the brief introduction. The focus quickly shifted onto Mike Bithell, best known for Thomas was Alone. He finally introduced his next game, Volume which clearly took inspiration from Metal Gear Solid's VR Missions just like Mr. Bithell said. The top down view and clearly portrayed vision cones mixed with a very polygonal style really got me intrigued. The game is clearly pretty early in development but it seems to be taking a hard stance on both stealth but also character development. 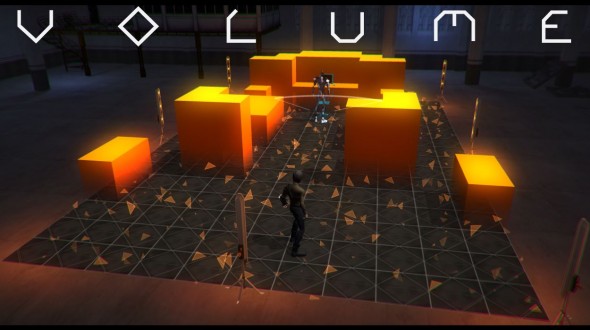 Paradox interactive again came out showing that they are in full support of the Playstation 4 by giving a very brief glimpse at Hollowpoint and also teasing Runemaster.  The big surprise came when Dean Hall, creator of the wildly popular DayZ mod took the stage. We were pretty sure that sometime DayZ would make the leap to consoles, it is simply too popular not too. With that said, the idea of linking both the PC and PS4 versions together to create a better experience for all was a bit of a surprise, albeit a good one. I have been a big fan of the PC version and while I think this is a great idea, it is yet to be determined how well the game will play on a console with a much more limited button layout.
Things at Sony's conference got even more fast paced here with the reveal of Hellblade from Ninja Theory. Although it was just a CG trailer, Ninja Theory has a pretty great track record ending with the fantastic reboot of Devil May Cry so I am thinking this could have some potential in the long run. Unfortunately, we are going to have to wait for the time being. Rime then took the stage with a very quick trailer that showed off a gorgeous, whimsical world with a colorful artsyle that is reminiscent of The Legend of Zelda: The Wind Waker. The trailer showed a bit of platforming  with some puzzle solving thrown in so for those of you waiting for the next great platformer, this could be it.

Destiny unsurprisingly showed again and again pushed their exclusive content for the PS4 along with making their first expansion announcement. The Dark Below is set to launch for everyone in December and I for one am increasingly becoming more concerned with Destiny. Launching an expansion just three months after the games initial release leads me to believe that the main game isn't going to have the long legs I thought it would have. Prices haven't been stated yet but I'm guessing the term expansion is being used for a reason, expect a $20-$30 price tag.
Then Hideo Kojima came on. Oh man, Metal Gear Solid V: The Phantom Pain has been looking both incredible and ridiculous since its conception but now it's at a whole new level. It seems like the deadliest weapon on the battlefield is no longer Snake himself but his Swiss army box that practically has a counter for every conceivable situation. Apparently, the soldiers Snake is battling against are so gullible that placing a picture of a swimsuit model or guard on the box is enough to distract them. Stupid and also kind of hilarious as I cannot wait to get my hands on that game.

Horror was surprisingly prominent in Sony's conference, a game called P.T was announced along with the rebirth of the long lost PS3 game, Until Dawn. In fact, I am downloading the demo of P.T right now thanks to Sony releasing it simultaneously with the announcement. Until Dawn was announced quite a long time ago and its resurgence to the PS4 was a glorious one. The concept of watching unbearable teenagers die horrible deaths that horror was built on seems to be completely intact here in what seemed like Heavy Rain style gameplay. The facts are still slim but I am now more interested in Until Dawn than ever before.

Sony then took the time to finally announce that one of the first features they ever showed off for the Playstation 4 is finally coming in update 2.0. Pass the controller will let you virtually "pass the controller" to a friend who is watching you play a game. Whether you guys are taking turns on a level or need some help, you can do this at any time. On top of that, the person you are passing it too does not need to own or even download the game. It is a really cool idea that I can see having a lot of use. Just moving myself, I can find actual reasons to use the feature with my friends back home, I'm sure many others are in the same boat.
Driveclub popped up again to remind us that that game is still coming out this year and honestly left me completely uninterested. I enjoy a good racing game but everything I have seen of Driveclub has just been a bit lackluster. Still, I'll give it the benefit of the doubt and see how it is this October. The bigger surprise was that Tearaway, a once Vita exclusive is making the jump to PS4 as Tearaway Unfolded. For those who didn't play Tearaway and there are a lot of you, it was one of the most delightful games I have had the pleasure of playing. There were definitely some issues but nobody can make goofy gimmicks more magical that Media Molecule. The way they have made the PS4 controller seem like a portal into the world of Tearaway Unfolded is absolutely stunning and I can't wait to see more.

Housemarque then took the stage of announcing their next game Alienation which resembled their previous product, Dead Nation. The game is coming exclusively to PS4 along with Wild. Wild is a game being made by the guys who created the most recent and excellent Rayman games. It looks almost like a survival game where I believe you can play almost any character or creature in the game. The short tease showed us a huge expansive world with lush grasslands and dangers around every hill.

Overall, I enjoyed what Sony showed even if it was pretty slim on meaty details. Sony fit a lot of games in a short amount of time, most of which at the very least caught my eye. However, yet again the Playstation Vita got the shaft with almost no new announcements for the platform. Despite the initial reaction to that, its reasonable to assume a lot of these games will feature the cross buy function, meaning most of these smaller games could very well be heading to Vita. Hopefully, more details will start to trickle in soon but for now we are left with a lot more questions than answers.