Midway through the 2004-2005 television season, no one would’ve expected a modest comedy about workers at a paper sales company to be a hit, and at first, The Office wasn’t a hit at all. When Greg Daniels (who wrote for King of the Hill and The Simpsons) announced that he was adapting the hit British comedy of the same name for American television, few people though his risk would pay off. The British version of The Office is a cult favorite, and fans were unconvinced that an American version of the show would retain the snark and wit of the original. Plus, comedies in general are less popular than they used to be, so a scripted series intended to be funny isn’t the automatic hit we saw in the 1980s and ‘90s. 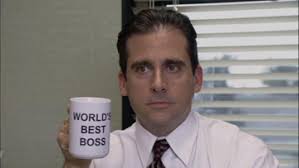 In the beginning, dire predictions about The Office seemed to be correct. The show started strong, with a  rating of 11.20 for the premiere episode, but the numbers fell off, with the entire, abbreviated first season boasting an anemic 5.4 ranking. But the show picked up steam, with second season rankings at 8.0, and third season rankings at 8.3 Now here we are, at the end of season 9, and though rankings have fallen off again (the season premiere ranking was only 4.28), devotees of the show still tune in every Thursday night, and there’s no denying that Michael (how we miss his cringe-worthy antics), Meredith, Pam, Jim, Stanley, Angela, Dwight, and the rest of the Dunder Mifflin crew have wormed their way into our hearts. Despite the show’s enduring popularity (okay, we admit a recent ratings slide), this season is the show’s last, with the finale set to air May 16 (the last episode will be the show’s 200th episode), devoted Office watchers are desperate for information about the final episode. So read on for confirmed information about the finale and some fun predictions (some based on nine seasons of watching the show, some wishful thinking).

Will Michael Scott be in the finale?

Let’s get this one out of the way quickly. No. (Maybe). Ask Ausiello reported back in January that Steve Carell was absolutely not interested in returning to the show that made him famous. Carell stated that he felt his character’s story arc had come to an end, and that returning didn’t make sense for the character. But more recent sleuthing reveals more ambiguity from Ausiello. Apparently, Carell was on set for the finale, although his rep claims he didn’t shoot any scenes. However, executive producer Greg Daniels, who was willing to tell the world that Carell was absolutely not returning, is now mum on the issue. Throw in an unnamed source’s cryptic comment about not ruling out anything, and we have a mystery on our hands.

Answer: Toss-up. I’m learning towards yes, but mainly because I can’t imagine an Office finale without the world’s best boss. But let’s be honest – there are lots of reasons for Carell to be on set (he has friends there, after all), and he did give a pretty good reason for not returning.

How long will the finale be?

Good money on more than an hour. Ausiello reports that Greg Daniels is pushing for more than an hour, and considering that this is the swan song for the show that reinvigorated NBC’s comedy block, I bet he’ll get it.

Answer: An hour and a half, minimum, with a retrospective.

Will Jim and Pam end up together?

We don’t have a solid answer on this, but I can’t imagine the show ending any other way. The Office spent three years establishing Jim and Pam as the perfect (yet clueless) couple, and then another six developing their relationship and then depositing them solidly into a happy family life. I know the most recent episodes have shown them going through a rocky patch (Jim in Philadelphia without enough time for his family, Pam in Scranton relying too heavily on former filmmaker Brian), but the show is obviously showing us that committed couples can work out their troubles. Access Hollywood indicated that John Krasinski is satisfied with the characters’ arcs; apparently, Krasinski loves how realistic and believeable Jim and Pam’s relationship has been. Doesn’t sound like a couple on the rocks to me.

Answer: Yes. This show has always focused on the mundane and everyday, not on shock value. Breaking up the show’s core couple would be a stunning move, and totally out of character. Look for a happy ending for the Halperts.

Will we ever be able to view the documentary?

Answer: Maybe. My bet is on a DVD special feature. (Please?)

Angela and Dwight end up together. This is a given. The show has been dropping anvils left and right. With the Senator officially out, there’s nothing preventing these two from finally getting together.

Erin and Pete end up together, and nobody cares. Erin had a pretty promising start on this show, but she’s become awfully dull as of late. And Pete has been totally eclipsed by the awesomeness of Clark. My guess? A throwaway line or two, but no major scenes.

Most of the office workers are still at Dunder Mifflin at the show’s end. Minus Jim and Pam, expect to see Stanley, Meredith, Kevin, Oscar, et al. occupying their same desks in the finale. Let’s face it: in the real world, people work boring, stupefying jobs even when they don’t want to.

Jim and Pam will move to Philadelphia. Pam will be nervous and apprehensive, but she’ll do what’s right for her family. No way can Jim go back to paper sales now.

Dwight will end up manager of the Scranton branch. Dwight has always craved power (and found odd ways to get it). And Andy has never had the fortitude for the job. Plus, no one likes him. Andy will end up demoted or fired, and with Jim gone, Dwight will slide right into the manager’s share. Heaven help us.

So please sound off in the comments. What do you think will happen to the employees of our favorite regional paper sales company? What do you want to happen? Most importantly, will we see Michael Scott again?