What do Community, Parks and Recreation, Happy Endings, and Partners have in common? Oh, wait, you don’t remember Partners? That’s fair. Not many watched the misguided CBS comedy, which led to its abrupt cancellation after airing only six episodes in 2012. Scratch it off the list. As for the other three, even though they’re currently in their fourth, third, and fifth seasons, respectively, and consistently garner high praise from critics, their ratings don’t match up with the outstanding levels of comedy they produce every week.

In television, it’s all about the numbers. Until just recently, Nielsen Media Research measured consumer viewing through electronic meters and paper diaries during “sweeps” periods, and studio heads use these ratings, especially those in the coveted 18–49 demographic, to determine whether a show should be renewed, moved to a different night, or pulled from the schedule entirely. So why aren’t more people watching the aforementioned comedies? 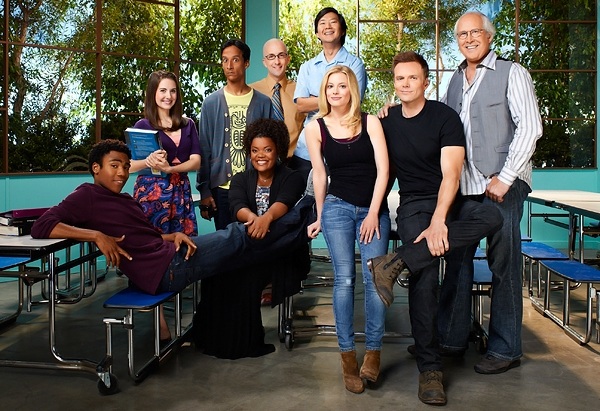 The Big Bang Theory constantly sits atop the ratings charts, but while I enjoy watching Big Bang, which isn’t difficult since TBS airs reruns daily, it’s a show I can leave on while I do other things. Sure, Sheldon has his moments as a neurotic genius, and they always try to do right by nerd culture, especially when they nab fun guest stars like Wil Wheaton and Leonard Nimoy, both of Star Trek fame. However, their brand of comedy, while funny at times, doesn’t bring anything new to the genre. Hence, the inevitable turn to multitasking. It certainly doesn’t compare to the creativity displayed on Community, whose episodes over the years have featured stop-motion animation, seven alternate timelines, an 8-bit video game, and several school-wide paintball fights. When the show is on, my eyes stay glued to the screen lest I miss any hidden gems, such as Abed (Danny Pudi) helping a woman give birth in the background of several scenes. Since its premiere in 2009, the show has inverted sitcom tropes and presented an authentically clever voice with a zany cast of seven characters, including my favorite duo Troy (Donald Glover) and Abed, who have formed a fun collective at Greendale Community College.

Unfortunately, NBC has always had a contentious relationship with Community show runner Dan Harmon, clashing with his creative direction and management. By the end of the third season, they finally fired him from his post. Harmon made a stink about the firing on his personal blog, but what’s done was done. The show would forge on without its creator. Unsurprisingly, the current season started ubiquitously, with NBC moving the show to Fridays, moving it back to Thursdays, and ultimately delaying its premiere until February. Moreover, the content has lost some of its luster since Harmon left (that’s a topic deserving of its own article), but even at its worst, Community still bests most sitcoms on television with its quirky antics. I’d like to think they’re still trying to reconcile their identity post-Harmon, and I hope the dismal ratings will start to increase once that happens. At least the fans haven’t deserted the show completely – one stalwart supporter organized CommuniCon in Los Angeles during the second weekend of February, and the convention, which included tributes to the show, panels by writers and actors, and even a special appearance by Harmon, was deemed a success by the over 400 attendees.

Once regarded as “Must See TV,” which at the height of Friends’s popularity saw ratings in the mid-20 millions, NBC’s Thursday night schedule has fallen on hard times. But along with Community, Parks and Recreation stands as another unsung hero in the line-up. Because it comes from the minds behind The Office and has a similar documentary style, some wrote it off as nothing more than an Office redux when it premiered in 2009 with six episodes. Yet despite a lackluster first season that tried too hard to fashion Leslie Knope into a female Michael Scott, it eventually found its groove and developed endearing characters and memorable storylines about life in Pawnee, Indiana.

Amy Poehler shines as mid-level bureaucrat Leslie, but the best episodes find everyone rallying together for a single cause, such as the most recent episode, which saw Leslie and Ben (Adam Scott) get hitched after an almost three-year courtship. With 30 Rock and The Office ending their runs this season, NBC would be crazy to build up their comedy offerings from scratch. That’s the best hope these two brilliant shows have for renewal, considering their less than stellar ratings, but if that technicality guarantees they’ll be back on my screen come next fall, I’ll take it.

Other networks aren’t immune to allowing brilliant sitcoms waste away. Although they have a veritable hit with Modern Family, which struck that rare balance between satisfying critics, winning numerous Emmy and Golden Globe awards, and garnering huge ratings, ABC hasn’t quite known what to do with Happy Endings and its brand of offbeat humor. Like Parks, it suffered from people dubbing it a poor man’s version of another popular show when it premiered in 2011. In this case, because there are six thirtysomethings living in a metropolitan city, it became the new, but less interesting Friends. When a show is pigeon-holed, it’s hard for it to develop an identity, but after a mostly disjointed first season, the show came back for a full 22-episode order with great storylines featuring zinging pop culture references and wacky situations, such as having strange sex dreams fueled by a special cocktail or staging an “inter-V-ntion” to prevent Dave (Zachary Knighton) from wearing v-necks. All six actors in the ensemble play off each other really well, but Alex, brilliantly brought to life by Elisha Cuthbert, often steals the show with her head-scratching one-liners and propensity to overeat. Unfortunately, starting in March, the show moves to the Friday wasteland, where most shows go to die. ABC Network Groups president Paul Lee called it a “water-cooler show,” but he surely must know that most people don’t have work on Saturday, right?

Short of personally trying to boost ratings by pestering everyone I meet to watch these three shows, perhaps the only course of action is if these shows do get cancelled, is moving to cable where they can cultivate a smaller but more dedicated viewership. A prime example is Cougar Town, which wasn’t officially canned by ABC, but instead purchased by TBS, where it just started airing its fourth season. A cable network could offer more freedom to play with storylines, resulting in a better show. Or they can take the Arrested Development route, which, after getting cancelled by FOX in 2006 despite three award-winning seasons, is getting revived in May on Netflix with 14 episodes. In any case, that means all hope for creative television shows is not lost!

But let’s circle back to my original question of why people aren’t watching. Are they too busy with their lives to spend a half-hour watching at least one of these funny shows? Or are they too scared to start watching, fearing they’ll get sucked into to the world of outstanding comedy? Well, I say you need to take the leap. The time is now, and the shows – Community, Parks and Recreation, and Happy Endings – are these. Get to watching!