"Let's rock for a second time on PS4!"
By: Jeffrey Dy | PS3 Reviews - PS4 Reviews | June 10, 2016
I always respect the Arc System Works fighting games from Guilty Gear and Blazblue. Fans that prefer complex character designs, fast paced action, air dashing and simply doing cool anime stuff love those games. My last "anime" fighter I spent decent time on was actually Arc's take on the Persona series with Persona 4 Arena. I loved how newcomer friendly the game was because it had to cater to non-fighting game fans because the game it's based on is a RPG and also had the necessary modes for players to get better. It was only a matter of time when Arc returned to their premier franchise Guilty Gear and they did with Xrd SIGN a couple years ago. Guilty Gear Xrd Revelator is the second iteration of the Xrd line continuing Arc's tradition of releasing sequels than updating the vanilla game. However, Revelator ain't just your normal iterative update. With arguably the best fighting game package around, the latest Guilty Gear is well worth the $60 compared to higher profile fighters that have been getting the attention. 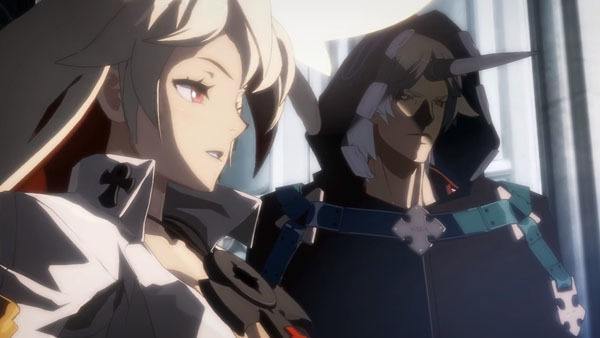 Revelator's story takes place immediately after SIGN where Sol Badguy was able defeat Justice and Sin Kiske managed to get Ramlethal Valentine to open up more of her good side. The cost of those actions was Elphelt being captured by the true mastermind behind everything as she hopes to wipe out the current humanity and start a new one. Sol, Ky Kiske and Leo now have to figure out a plan to rescue Elphelt from this mastermind and prevent another rebirth of Justice, the Gear who started the Crusades long ago bringing humanity to it's knees. The rest of the Revelator cast have minor roles, but they're still there in some capacity. Just like Xrd SIGN, you don't actually play Revelator's story mode. It's basically an four to five hour anime to watch and you can take a break between chapters if you can't watch it in a single sitting. Since it's an anime, the plot progression is as anime as it gets with the main villain being Joker-esque at times and some random humor mixed in all the drama. You know what, I don't mind watching this than playing pointless fights that take one round and the CPU AI does little to nothing at all like Persona 4 Arena. For those that prefer the traditional arcade mode, Guilty Gear Xrd Revelator has that called Episodes. It is your standard eight fight romp that takes place before the events of the main story for each character. Difficulty can get harder the better you do against CPU opponents, which is a neat touch. Besides that, M.O.M. returns from past games which you can customize a character with different stats and items. So far not a lot of people spend much time with this mode, but still a nice feature to have if you want to make Sol beat opponents with just one Volcanic Viper. 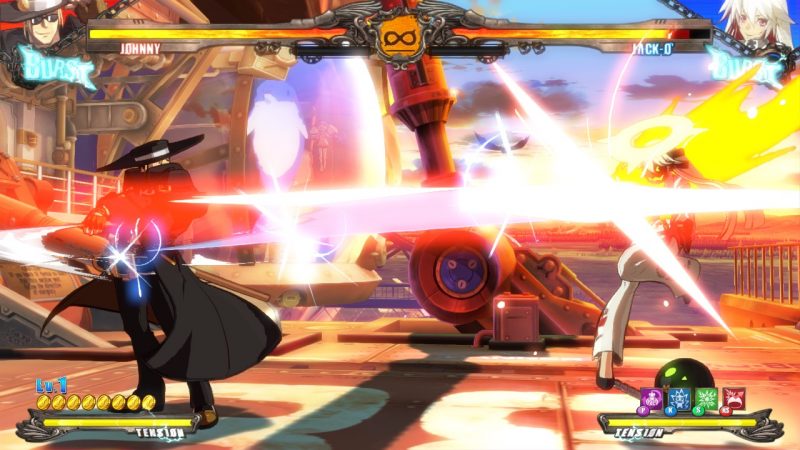 Gameplay is still as fast and fluid as the previous Arc System Works fighters. It's pretty satisfying to pull off stylish combos, whether it's your normal bread and butter one that can lead to a setup, dust combos where you launch an opponent high into the air and the rare feat of winning with the Arc staple instant kill moves. However, the skill gap tends to be big with "anime" fighting games compared to the rest of the genre and Guilty Gear is no exception. You'll just get mauled by tournament level players online when they're able to dictate the pace and executing all their setups to the point you can't do anything at all but block praying you'll get an opening to strike back. Staple mechanics such as burst, roman cancelling and negative penalty, but there are some substantial changes from SIGN to Revelator. One of the big notable omissions from SIGN was throw teching, but Revelator now has that. Overdrive supers also have burst versions where there they are more damaging than their normal versions, bust cost both tension meter and burst. The blitz mechanics also got some changes, but another big addition is the stylish type option for newcomers. Players that select the stylish type before fights can perform auto combos reminiscent of Persona 4 Arena, have a single button just for special moves and overdrive supers and also auto block in certain situations. There is a lot to take in the mechanics for Guilty Gear Xrd Revelator's learning curve and fortunately the game has the tools to make newcomers better if they're willing to devote time to them. 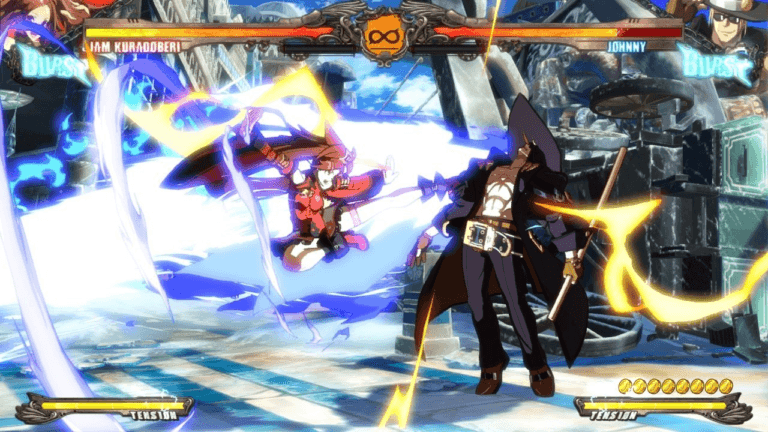 Other than the tutorial teaching the basics and training mode to lab it up, Revelator's mission mode has you learning fighting game fundamentals alongside using the mechanics in their ideal situations. Common fighting game tactics such as spacing your attacks out and tick throws are examples, but you can learn about mechanics you normally wouldn't use in a match and try to implement them into your game. This is way better than a certain fighting game that came out earlier this year that only has video demonstrations than you actually doing them five times. Mission mode also has exercises with character matchups as well in case you're struggling against a certain character that consistently beats you. Combo trials are additionally there for players to execute a character's specials, practical combos that are very useful in matches and more advanced combos that are challenging to execute. The amount of in-game tools for players of any skill level have at their disposal in Guilty Gear Xrd Revelator is staggering. I wish more fighting games can implement similar efforts to tutorials and missions that teach fundamentals like what Arc has been doing for years now in their console releases. The character roster for this latest Guilty Gear has everyone from SIGN coming back along with some heavily requested characters returning and new guys with unique playstyles. For returning characters that missed out in SIGN, Johnny and Jam are back along with Dizzy coming soon as DLC. Making their series debut are Jack-O, Raven and Kum Haehyun. Jack-O is arguably the most unique fighting game character to date with her summing ghost minions as if you're playing a MOBA, but her playstyle might be familiar to those that played the Overture RTS game. Raven actually debuted in Overture, but this is his first appearance in a fighting game being surprisingly easy to pick up for new players. Haehyun reminds me of Street Fighter's Gouken in his appearance with powerful martial arts attacks. Kum and Raven are actually free to download till June 21st, so get them now while you still can without paying. 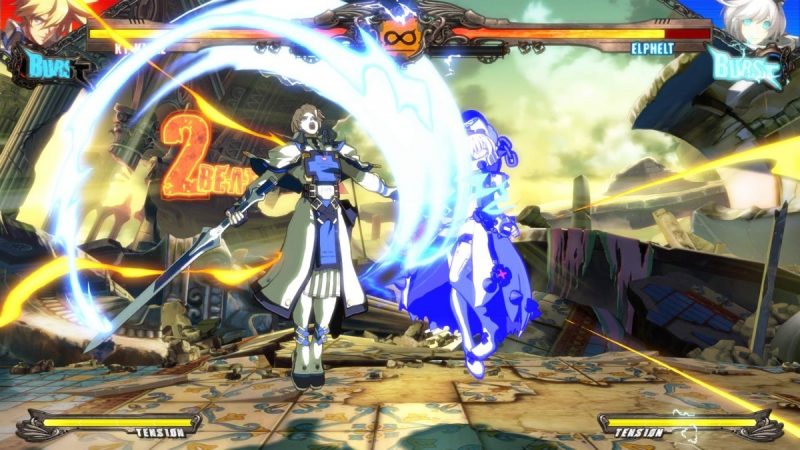 Online play consists of ranked matches, player matches and lobbies to walk around meeting others in their Guilty Gear avatar. Lobbies are also divided up by region if you prefer fighting someone online closer to where you're at. The netcode during fights so far has been pretty good even at low bar connections. Of course not every match online will be lag free pending on your opponent's connection settings. More people prefer playing player matches than ranked since that's the quickest way to get matches and I'm been facing the same players on ranked since the game launched in the US. For ranked, you do to have play ten placement matches first before actually being ranked, another element that has been implemented in other fighting games. Arc System Works has had a great track record and Revelator continues that with it's online performance. When Guilty Gear Xrd SIGN was first shown off, it was already the best looking fighting game in recent memory. Revelator is the same case pulling off the anime artsyle in amazing ways. The game looks simply beautiful in motion and the framerate stays impressively consistent throughout the fast action. The rocking soundtrack is still awesome to hear in this series and one of those games you want to pump up the sound, but there is only Japanese voices in this version. SIGN had English voices and I was surprised fans still wanted them for Revelator as well. 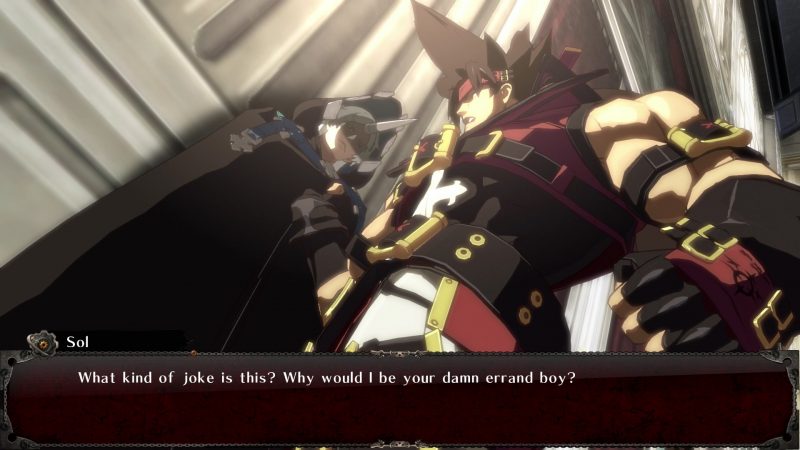 Guilty Gear Xrd Revelator is the definition of the complete fighting game package. That is something you can't say surprisingly about the other fighting games that are out now. From it's lengthy story mode that is actually an anime to watch, plenty of single player modes to keep players busy, tons of tools especially for newcomers to learn with it's missions/combo trials, and great netcode for online play, Arc System Works' latest is doing everything right for both the casual and tournament-level crowd. They even gave out a free demo for those that preordered digitally with the whole cast minus DLC available to play that was used at tournaments before the final game's release! It's still the best looking fighting game around with it's beautiful anime-like visuals too. The learning curve however may be too much for some along with the complexity of some characters, but the in-game tools are there if players want to get better. For $60, this is a must have for any fighting game fan that is actually worth that value because of how much content is in currently. It is a shame that the higher profile fighters will still get all the attention, but with how this iteration turned out and a great time slot at the Evo finals next month, this is the best time for a Guilty Gear fan or to become one.
Rating
9.0
Pros