Hands-On with Disney Epic Mickey 2: The Power of Two

Disney’s Epic Mickey was released exclusively for the Wii a couple years ago to a mixed reception with critics. Junction Point, led by Warren Spector, made a solid platformer featuring Disney’s main mascot, but the execution of the little things could've been better like the camera. What they had going with was Mickey’s magic brush and the moral choice system players had to deal with. The developers are back again with Epic Mickey 2: The Power of Two and while some things remain the same, the core of the game has been changed to have a heavy focus on co-op, hence the title. A demo was recently released on Xbox Live and Playstation Network as I took a look at what is new with Mickey Mouse and Oswald the Lucky Rabbit in the world of Wasteland.

The brief demo is pretty much the beginning of the game where an intro cutscene explains a little recap of the first game and why Wasteland is being attacked again. The Mad Doctor wants a second chance to fix things at Wasteland despite messing things up last game as one of the villains. Oswald is willing to give him at as new enemies are attacking their homeland. Mickey is being summoned to the fold by Gus and Ortensia as the game begins with him wandering into a different world to get his magic paintbrush back. Once he steps back into Wasteland, the castle the crew has been hanging out as a home is crumbling, so him, Oswald, and the rest of the crew have to escape. 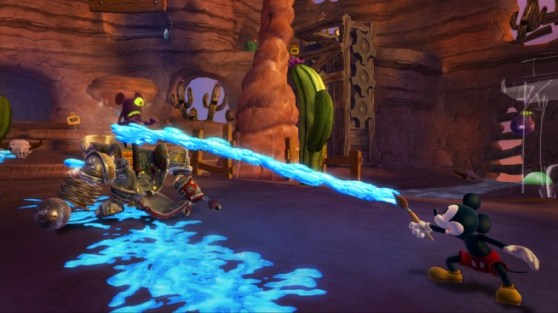 This is the first Epic Mickey game to appear on the Playstation 3 and Xbox 360, so the controls are a little different than they were on the Wii. Once Mickey gets the magic brush, he can paint by pressing or holding the triggers to create platforms, clean up toons, and spray up enemies to be either destroyed or used as an ally like the previous game. With that in mind, the moral choice system regarding the paint is back is blue is used for good and green for the opposite, but both have to used solve certain puzzles. The painting can also be controlled with the Playstation Move, which should be familiar for those that played the Wii original. The platforming from what I played so far is fine as Mickey as double jump and the camera was not much of a problem either. Mickey’s spin attack from the last game is also back with the same purposes.

The big addition with this Epic Mickey sequel is Oswald as a co-op partner. Once he comes back from meeting with the Mad Doctor, he is playable by another person or a CPU AI if you’re playing alone. Despite how heavy this game is co-op focused, another person can not join in online, which is very unfortunate for a game like this. Mickey has hang on to Oswald to navigate through long gaps since has the ability to hover. Oswald also has a remote useful in certain situations. There are many instances where both Mickey and Oswald have solve puzzles together, but sometimes the CPU AI controlling Oswald does not respond right away if Mickey is already done with his part and waiting. Other than that, the co-op dynamics between the two are fine especially with another person locally, but if the demo is any indication, you might not have a better time playing it alone with a CPU-controlled Oswald. 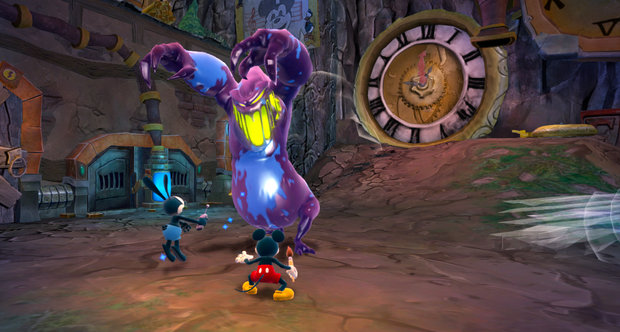 Even though a different team is handling the 360/PS3 ports for Epic Mickey 2, the game does look great so far as it is finally great to see an Epic Mickey game with HD graphics. There is a mix of CG and cartoony cutscenes already in the demo with the Mad Doctor singing a Disney-style song being sorry for his actions in front of the Wasteland community in the CG cutscene and Mickey’s return being done in a cartoony style that reminds me of some of the older Disney cartoons. The sound is also top notch from what I heard, which is not surprising for a game coming from Disney Interactive Studios.

From what I played of the demo, Epic Mickey 2 is shaping to be another solid platformer by Junction Point and Blitz Games, who is working on the 360/PS3 ports. The heavy focus on co-op is a big change in direction, despite no online support at all, but some of the core gameplay elements from the last game are back. Being multiplatform does allow the game to have a better chance at success sales-wise even though it is coming out in a crowded holiday season. It is definitely a game worth watching out for especially for children. Epic Mickey 2: The Power of Two is coming out on November 18th for the Playstation 3, Xbox 360, PC, Wii, and the Wii U.