Mass Effect 3 has been one of the better games this year when it comes to having downloadable content out on a consistent basis. From the expanded ending, free multiplayer expansions, weapon packs, and new single player missions that take two to four hours to beat, there is something for everyone. EA and BioWare recently released the third single player DLC for the game, simply titled Omega. Out of the three released so far, Omega is the most action-packed with lots of combat sections, but don’t expect too much out of the story being essential for the main game.

Omega is pretty much its own campaign with its own beginning and ending. Commander Shepard meets up with Aria, former leader of Omega, at the Citadel with a big plan to retake the station from Cerberus control. General Oleg Petrovsky leads the Cerberus operations over there and Aria is obsessed with getting revenge for he has done to what was originally hers. The DLC’s goal is simple as it is up to Shepard and Aria to retake Omega from Cerberus. Along the way, you’ll meet up with Nyreen Kandros, a female turian and leader of the Talon gang. She has her own motives to save Omega from Cerberus and a past history with Aria. Your squadmates in the main game are not playable in this DLC as Aria and Nyreen are your partners for the whole mission. 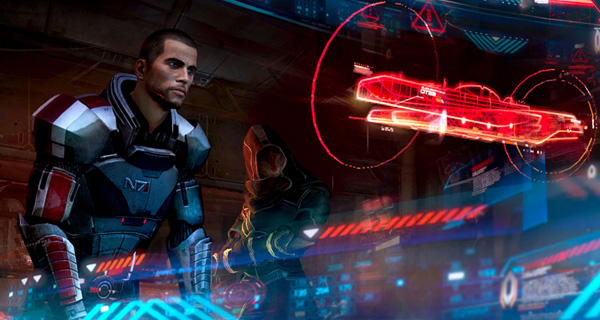 I mentioned earlier how action heavy Mass Effect 3’s Omega DLC is out of the downloadable missions released so far and that is indeed the case. You’ll be facing against numerous waves of Cerberus forces throughout the mission along with some new enemies. The new Cerberus mechs that were introduced in the multiplayer some months back are among some of the new enemies you’ll encounter. The other new enemy you’ll encounter in Omega are Adjutants, Reaper-like creatures controlled by Cerberus. It is nice to see some new enemies be introduced in this DLC, but you’re still mostly killing the Cerberus forces you know from the main game a lot.

The core combat remains the same as the main game, but with Aria and Nyreen as your only squadmates, they’re fun to have around to deal damage against Cerberus with their biotic and tech abilities. Unfortunately, these two are not playable squadmates in the main game after you beat it. There are some side quests in Omega, but they’re just simple fetch quests and you’ll find the necessary items during your travels there. Your Paragon and Renegade choices will affect certain scenes, relationships with your two squadmates, and even the ending of this downloadable mission, so there is no single outcome on how your time at Omega plays out.


Omega was an interesting locale to explore in Mass Effect 2 and it is nice to revisit it as DLC in Mass Effect 3 despite not being as open as it was last game since Cerberus took over. The graphics look fine with the game’s standards, but there are some noticeable glitches during certain cutscenes even though they are minor. Carrie Anne Moss reprises her role as Aria and does a good enough job with the character. Other than that, the voice overs are what you expect out of the Mass Effect series from Shepard and other characters.

For $15 or 1200 Microsoft Points, is Mass Effect 3’s Omega DLC worth your money? If you’re itching to play new Mass Effect 3 content, it is worth it. It is a bit longer than the other two downloadable missions at three to four hours. Omega has its own storyline with Aria willing to do whatever it takes to take the station back from Cerberus, so if you’re expecting it to advance things in the main story, you’re not going to find it there. It is also the most action-packed out of the DLC released so far with numerous enemy encounters. Aria and Nyreen are great squadmates throughout the mission even though they are not playable in the main game. BioWare has said they are not done with single player DLC yet for Mass Effect 3 as there is one more left to be released if you have been following the rumors. It is not the best single player DLC with From Ashes remaining the best one, but Omega is still a decent addition to Mass Effect 3 for series fans and those wanting another reason to play the game again.