Hands-On with Ni no Kuni: Wrath of the White Witch

There was a time when Japanese RPGs were the one of the more popular genres in the world of video games. These games have been on a decline throughout this current console generation even though there were some that came out to keep the genre going. Also, the rise of more popular and better western-based RPGs like the Mass Effect and Elder Scrolls franchises are another reason why Japanese RPGs have been not so good relying on dated design philosophies. Namco Bandai and Level 5’s Ni no Kuni: Wrath of the Witch hopes to bring some excitement again to the genre next year. A demo was recently released on the Playstation Network and features two quick scenarios to play through. From what I played from this demo, Ni no Kuni is shaping to be a nice and refreshing JRPG if you have been playing too many western-based RPGs lately.

The first thing you’ll notice about Ni no Kuni: Wrath of the White Witch are the gorgeous graphics. If you have been following the game even though it has been out at Japan for a few months now, Level 5 collaborated with famous animation studio Studio Ghibli for the visuals. The art style for the game looks like you’re watching a cartoon or some anime from Japan. The storyline-related cutscenes have English and Japanese voice-over options, but the in-game scenes don’t have voice acting at all in traditional JRPG fashion. The soundtrack is also great to listen to whether you’re wandering around the overworld to battling against sets of enemies. 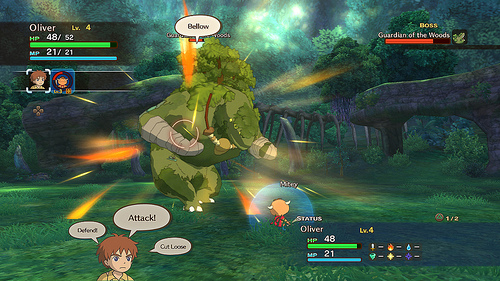 Ni no Kuni’s gameplay is your traditional JRPG with towns to visit, an overworld to explore, and a battle system that is actually easy to understand. In other words, it is not as complex as I thought, but then again it is a demo and things will be fleshed out more in the final game. You play as Oliver, a young boy who lost his mother, and is going on a quest to bring her back to life in a parallel world. Oliver is accompanied by a sidekick named Drippy, who serves more as a buddy that offers advice to help players out. There are no random enemy encounters, but enemies can fight if they see you at the overworld. For example, they can get you from behind and have a temporary advantage at the start of the battle like most JRPGs. As for the battles themselves, Oliver can move freely around the battle arena and attack enemies with his magic stick, but he is more of a mage-like character that uses spells. The deeper parts of Ni no Kuni’s combat are the familiars system. Oliver can summon familiars Pokemon style to the battlefield and attack the opposition up close. However, they have a stamina meter and have to recharge if they run out of meter as I usually call them out of the battlefield temporarily. Players can also dodge enemy attacks around the map and defend against certain moves to take less damage.


The two scenarios in the demo both have 25 minute time limits, but you can beat those sections assuming you don’t run out of health in battle. Time limits in demos like these suck since you don’t have enough time to mess around with the battle system or explore the overworld in the first scenario. The first scenario is an early part of battle where Oliver and Drippy face off against the Guardian of the Woods. After that, they have to head off to a town with new spells that take hearts from people and give them to those that need it. Sounds weird, but once you play that section of the demo, you’ll know what I mean. The second scenario takes place a little later in the game where Oliver, Drippy, and another party member named Esther have to prevent a volcanic eruption from happening. Another boss appears in this part of the demo, but you have more familiars to use in this battle as they have different abilities. 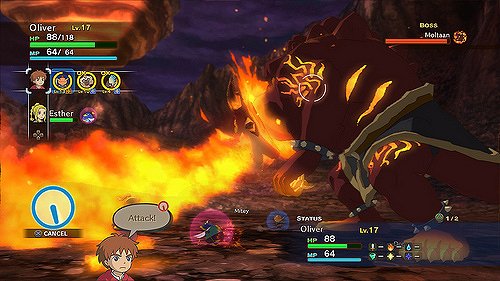 The demo for Ni no Kuni offers a good and quick taste of what to expect when the final game comes out on January 22nd. The combat system is easy to learn once you get used to attack and defend timing. Having different familiars around also spice things up, which is where the system potentially gets deeper. These familiars, however, almost feel like Pokemon in some way with their different abilities. The graphics and cartoony art style look gorgeous thanks to Studio Gihbli’s work. We will see the story offers anything special since you don’t much of it in the demo. Ni no Kuni: Wrath of the Wrath of the Witch comes out on January 22, 2013 only for the Playstation 3 and shaping up to be a great Japanese RPG that hopefully can bring some excitement back to the declining genre.