Note: This week’s episode of Hannibal is actually the fifth episode, not the fourth. The fourth episode was pulled by executive producer Bryan Fuller and NBC due to its content. NBC has made the pertinent scenes from the fourth episode available online, so if you were a bit confused as to some of the character interaction in this week’s episode, please check out the online “webisodes” to catch up.

"Coquilles,” the fifth episode of Hannibal, finds Will Graham beginning to unravel and offers a clear parallel between the week’s killer storyline and Jack Crawford’s story. What sets Hannibal apart from other procedural-type shows on network and cable television is the depth with which the show is willing to imbue its characters. In fact, there are times when I am watching the show where I feel that the killer of the week is really just distracting me from time I could be spending getting to know these interesting characters. I still felt that pull this week, however it was somewhat lessened as the killer actually tied into the personal storyline for one of our main characters.

This week’s killer is a man dying from a brain tumor who feels he can see the evil in others and, by filleting their skin into angel wings, offers them the chance at redemption. While it is again up to Will, Jack, and the FBI Behavioral Science team to solve the case, the killer serves a dual purpose to the storyline beyond a simple whodunit. During an interview with the killer’s wife, Jack and Will listens as she explains that her husband began withdrawing from her and their children following his diagnosis of cancer. This neatly parallels questions Jack is having regarding the behavior of his wife, Phyllis (played by Laurence Fishburne’s real-life wife, the superb Gina Torres). While this revelation feels a bit heavy handed, it finally allows us the chance to get inside Jack’s personal life a bit more. 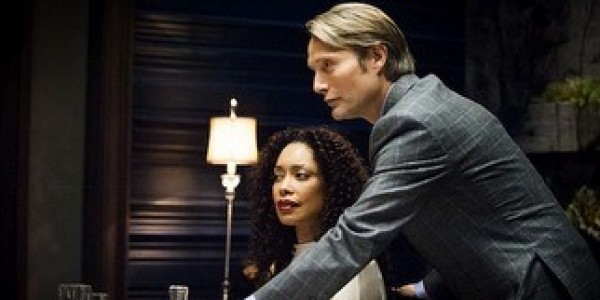 Seeing this character (a character that is so crucial not only to Will Graham’s story, but also to the future story of Clarice Starling, should we ever meet her in this world) finally allowed to be something other than the gruff boss or Hannibal’s dinner companion was a welcome change. And, frankly, when you have someone as talented as Fishburne to work with, it is almost criminal not to allow him to explore the full range of his character. The episode’s penultimate scene, with Jack and Phyllis discussing her impending death from lung cancer and the toll they both know it will take on Jack is a wonderful human moment, something that would be overlooked were this a true procedural.

The secondary purpose of the killer storyline is to further push Will to his breaking point. While Will is certainly treading into murky waters in his association with Hannibal, it is his inability to turn off his empathy that is setting him on the path to destruction. The latest indication that all is not well is Will’s newfound penchant for sleepwalking, ending with him in the middle of the highway in the episode’s opening and standing on his roof later in the episode. One of the episode’s central themes is sleep, and the need to have someone to watch over you while you sleep; this is something both the killer and Will appear to need.

As with the previous four episodes, the scenes between Will and Hannibal are electric. Both Hugh Dancy and Mads Mikkelsen have such a fantastic interplay between them that one almost wishes that Will and Hannibal spent more time discussing Will and the cases than actually watching the details of the cases play out. I say almost because it would be shame to deny the audience the chance to watch Mikkelsen work with other talented actors; this time, Torres, who is equal parts hardened and heartbreaking in her scenes with Mikkelsen. While Anthony Hopkins and Brian Cox brought their unique stamp to the Lector character, Mikkelsen has been able to create a Lector that combines the necessary charm and sophistication with an edge of darkness. I am eager to see when he takes this infamous character. 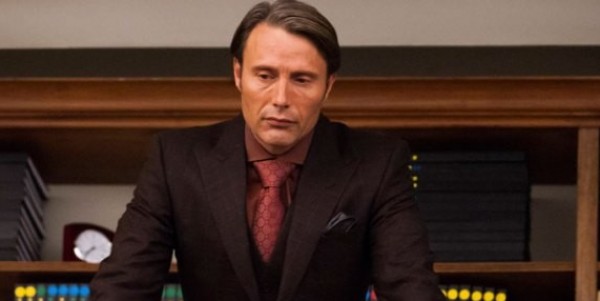 -- This week we don't see Abigail Hobbs or Freddie Lourdes. That makes two episodes without Lourdes, as she didn’t appear in the scenes that were released from episode four either.

-- During his dinner with the Crawfords, Hannibal tells the story of how he was able to sniff out a case of stomach cancer when he was younger. He follows that up by sniffing Phyllis, apparently detecting her cancer as well. Later in the episode, he sniffs Will and asks him about his headaches. Foreshadowing that something physical rather than mental might be causing Will’s sleepwalking and headaches?

-- The stag from Will’s dream, which appears to be a psychological link to the Hobbs killings, might also be linked to the stag statue in Hannibal’s office. Perhaps a subconscious linking of Lector and the antler impaling?

-- The visual style of the show remains stunning. For a show that can be so steeped in violence, the color pallet presented, particularly in the contrasts between the costumes and Lector’s office, bring an air to the show that helps to draw the eye away from the gore and directs us towards the characters instead.

-- Finally, while I am enjoying the show and the slow burn to the discovery of Lector's true identity, I can’t help but be a bit concerned that the audience may become restless with the pacing. The audience is well-aware that Hannibal Lector is the ultimate bad guy. However, the audience also knows that the characters on the show don’t know this yet, so every time a character interacts with Hannibal, viewers have to remind themselves that the character doesn’t know what we know. After a certain amount of time, I worry that the audience will start to turn on certain characters who fail to see that Hannibal is the true villain. I have already read some criticism that Alana Bloom must be an awful psychologist, as she has been close with Lector for years without suspecting anything. From a personal stand point, I’m not sure how many more cheery dinners between Jack and Hannibal I can handle before I start to (unjustly) succumb to this feeling. I trust Bryan Fuller more than I trust most producers, so I hope my fear is unjustified.