By: Patrick Cowles | PC Features | April 15, 2014
Following about 15 months of development and two months on Steam Early Access, the animated trading card game Infinity Wars and their developer Lightmare Studios sat down with members of the press to unveil some big news.  Last week we took the opportunity not only to see a preview of the digital animated trading card game by Creator and Chairman of Lightmare Studios, Elphie Coyle, we also learned that the company has secured a licensing partnership with CBS bringing Star Trek: The Next Generation into Infinity Wars.
That's a mouthful of news, not only seeing first hand what the game has to offer but also learning that a young yet creative and talented development team with limited funding has partnered up with CBS to bring one of science-fiction's most beloved franchises to their game.
We had a great conversation with Coyle about the game, the enthusiastic Chairman of Lightmare Studios.  Even though the game is still in a beta period of development, Coyle has already shaped a 20 year vision for the latest digital trading card game; here's a piece of it. 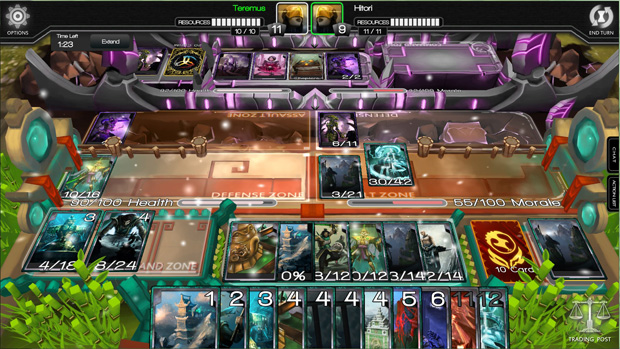 Trading card games are in vogue again, but this time around they are digital.  Digital TCGs tried to catch on during the early 2000's but didn't hit the big time.  Almost a decade later gamers are turning on to this style of game in similar fashion to MOBAs a few years ago.
The difference between the success of digital TCGs today and those of a decade ago is design.  Fans of the physical trading card games that came out of the 80s and 90s have begun to develop their own in a digital format; solving many of the problems the physical games suffered from.  Not making them more casual necessarily, but making them more accessible by making them free-to-play.
The recent industry trend of free-to-play digitally distributed games with a mirco-economy is one of the reasons Coyle and his partner Ian Underwood have developed Infinity Wars.  Coyle told us last week that he has dreamed of creating his own TCG since he seven, while his partner Underwood is a verbose TCG enthusiast himself.  That lineage inspired them to create their own styled TCG within a digital framework that has animated cards, one of their epiphany ideas when conceiving Infinity Wars.
Video games emerging as a medium for e-sports is yet another reason Coyle and Underwood brought their passions for TCGs into developing Infinity Wars.  Tournaments played a large role in the culture of physical trading card games, they are inherently competitive and the freedom to create a deck of a few dozen cards out of thousands added another layer of complexity to the competitive spirit these games have conjured in those that play them.  Coyle's plan for the long-term is to see Infinity Wars develop into a highly competitive e-sport title of its own.  Lightmare has even begun making connections with MLG and Twitch. 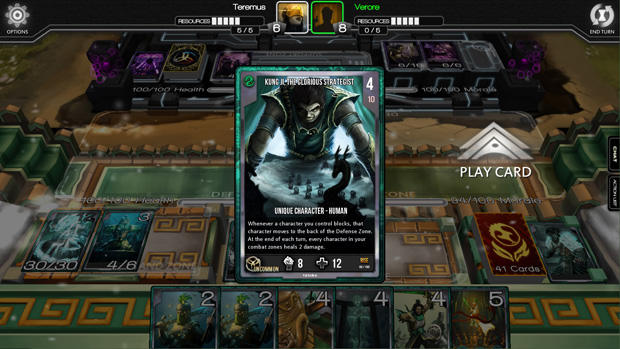 A key motivation for Coyle and Underwood has been creating a new style of digital TCG, a re-imagined gameplay experience stated Coyle.  Although the fully animated cards of Infinity Wars has set the game aesthetically apart from its competitors, the gameplay mechanics which Coyle showed us offer an experience that is new, unique, and different for TCGs.
The battlefield which matches are played on brings greater depth to the deployment of your creatures and abilities.  The offensive and defensive zones offset on the field allow players to dedicate creatures to offensive or defensive roles rather than having creatures battle on an open space.  The command and support zones furthermore offer players a sanctuary for their more powerful creatures along with a reserve of active creatures; these zones play heavily into the next mechanic we've found most intriguing.

Different from other TCGs both current and aged, Infinity Wars has simultaneous turns.  Rather than playing your turn only to wait for your opponent to play and finish theirs, players plan their turns at the same time; once they have both ended their planning phase the game resolves the decisions they made.  This mechanic brings to the digital tabletop another cognitive layer to gameplay, a predictive gameplay that also lets players bluff each other.  That is where command and support zones offer opponents the greatest question mark while deciding their turn; how is my opponent planning to play the reserve cards in their Support zone and what can I do to thwart them?  One must also keep in mind the abilities of commander cards (which are creature cards chosen by a player while creating a deck) and whether or not their opponent will move them into combat within the offensive and defensive zones.  Players can also freely move their cards around the different zones during the planning phase or reorganizing their ranks within a specific zone, a pivotal element to micro-managing one's creature cards as combat is resolved left-to-right within a combat zone.

The victory condition has also been redefined by Coyle and Underwood.  The slugging match style of reducing your opponent's hit points to zero before they finish you off is gone; paved over by a mechanic of attrition.  Though each player has 100 health to start, they also have 100 morale.  While health is reduced by unabated creatures within the offensive zone, creatures have a defined morale value that is reduced when the card is removed from play.  If your 10 morale creature is killed, you're down to 90.  Even if you suffer no loss of health during a match, one can still lose through attrition by literally attacking their opponent to death.
By offering more depth in death-dealing, the attrition mechanic has also by design reduced matches to an average play time of 10 to 15 minutes, though they can stretch longer.  However, the hours long heavy weight matches one can play through Magic: The Gathering won't play out for Infinity Wars.
Lightmare has also creatively solved another problem of attrition for players; a monetary concern.  With seven original factions created for Infinity Wars, along with the Star Trek: The Next Generation expansion which adds the Federation and Klingon Empire; Lightmare can continually develop more cards within the game's existing lore.  You won't have to buy packs of the next expansion for additions to your card library, the factions let Lightmare develop new cards to bolster gameplay instead of developing entirely new expansions.

Coyle and company have also mitigated the pay-to-win dynamic of TCGs by design.  Every single game-influencing purchase can be done with currency earned through play.  Over time with dedicated commitment, a player can get every single card without spending any money.  Some cards can only be earned through playing; the new weekly releases can only be obtained by completing a quest, the new card is your reward.  For a game that currently has over 300 cards and 120 quests, a large portion of the cards cannot be purchased.  As an additional incentive for completing quests, Coyle stated these unique rewards cannot be earned twice and you can only have one, meaning you can't trade an additional one from another account.
The different gameplay modes also serve to mitigate pay-to-play.  The campaign mode, which challenges players with faction specific scenarios, only allows you to use decks purely of that faction.  At least for the early scenarios; as you progress through a campaign the deck restrictions ease up.  For players that are dependent on hybrid faction decks, the early scenarios of a campaign will offer an obstacle of purity.  The mode that best exemplifies their commitment to merit of skill is the Merged Deck mode.  This gameplay mode shuffles both decks together putting opponents up against the same cards; the ultimate balance for pay-to-win while rewarding the most skilled or creative player with victory.

For now Lightmare Studios is focused on the personal computer as its platform of choice, for both Windows and Mac operating systems.  A mobile platform is in development, though at an earlier stage than the PC client.  In time Coyle expects mobile to become more integrated into the Infinity Wars realm but at this time the team is developing a companion client that will cross-platform with the primary PC client.
Since entering closed beta back in January 2013 and stretching into their open beta hosted by Steam Early Access, over 150,000 users have signed up for Infinity Wars with more than 4 million matches played.  Though Coyle didn't state when the game will officially release, Infinity Wars has launched on Steam in open beta for free.  Coyle stated that for the remainder of the beta period the team is dedicated to polishing and balancing the client and gameplay, you can check our their development roadmap here.