By: Jeffrey Dy | PS3 Reviews | September 25, 2012
Back in 2000, Sega released a stylish, original game called Jet Set Radio, or Jet Grind Radio at other territories. The cel-shaded graphical style was great, even on the Dreamcast at the time. It was also about themes rarely used in games back then mixing in inline skating with graffiti of spraying the streets of Tokyo-to. Jet Set Radio became one of many cult hits for the Dreamcast and had a sequel on the original Xbox a couple years later with Jet Set Radio Future. Sega has been a roll on bringing back arcade, Genesis, and Dreamcast games to the HD era this console generation. It was only a matter of time Jet Set Radio gets the HD treatment on the Playstation 3, Xbox 360, and PC. While the visuals and soundtrack as still as special as they were back in 2000, the gameplay simply has not aged well with today’s standards.

The original game remains intact in this HD incarnation along with the same tutorial to get new players familiar with the controls and goals the game provides. The tutorial, however, not as just your regular old tutorial you see in today’s games because there are some challenging things you have to perform to complete it such as long trick combos. Once you get going in the main game, there are only a limited number of characters to start out with as you first start as Beat, the main protagonist for the franchise. More characters are unlocked as you progress through the game after you beat their challenges. The story is pretty simple as the streets of Tokyo-to is filled with gangs spraying graffiti and it is up to your own gang, the GGs, to make yourself known in the city while getting away from the cops and other opposing forces. 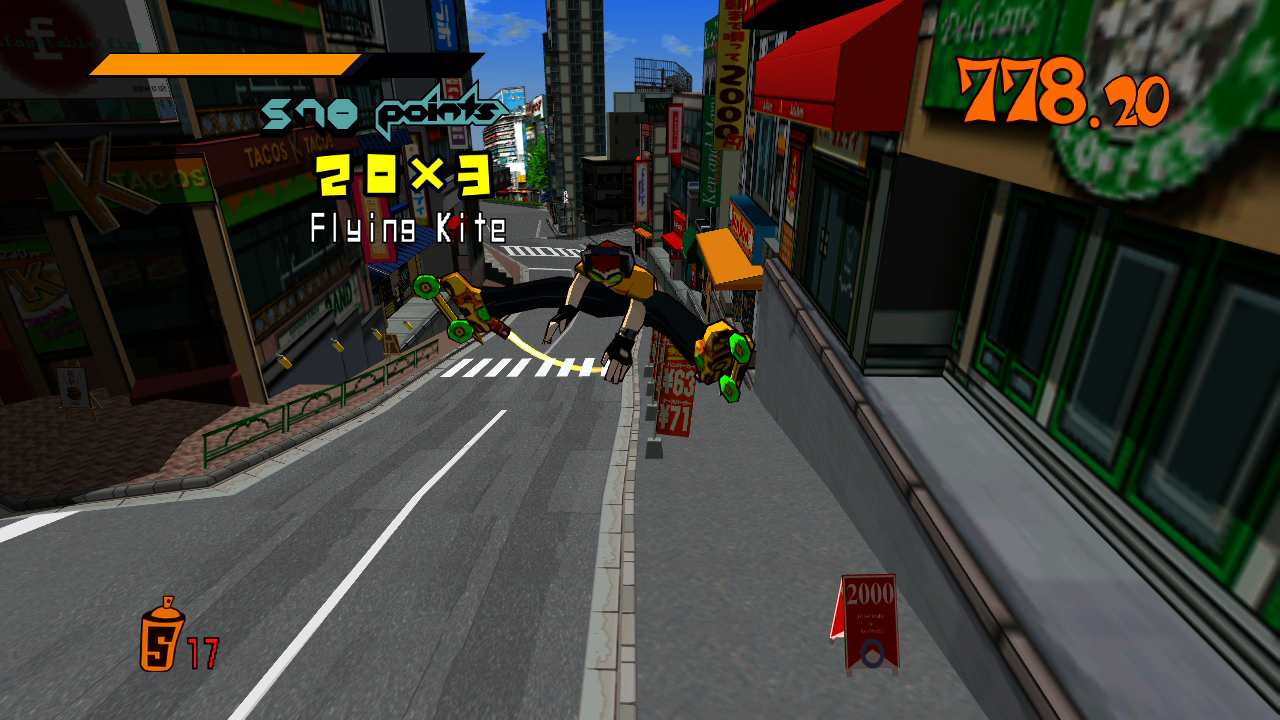 While the controls are pretty simple to grasp in Jet Set Radio with little to learn, you’ll be fighting against them most of the time during its campaign. It is one of those easy to learn, difficult to master gameplay systems, but the game’s physics can be unforgivable at times. Especially with performing air tricks or trying to attach your skates to the rails, it is not as forgiving as say the Tony Hawk games. Basically, pure precision is required to skate on certain rails to reach hard spots. Spraying certain spots of the streets are identical to the original being mapped to both the left and right sticks. I didn’t have a bad time with those for the most part compared to the trick system. After a certain number of targets were sprayed, cops and other enemies come in to ruin your chances of beating the level. They can be a pain to deal with especially with the reach the assigned goal when time is about to run out. The core gameplay as a whole has not aged well for today’s standards. While the game looks and sounds stylish, I was having a dull time with the game at times and this is coming from someone who didn’t play it on the Dreamcast.

Along with the frustrating controls, you’ll be fighting against the camera too since that can be a big issue as well. Despite camera issues, you can center it with the L2 and move it around with the right stick, which is actually new to this HD version, but there will be situations where the game’s camera won’t be your best friend. The main campaign does not take long to beat, but there are online leaderboards, graffiti souls to collect, and side missions to complete for the sake of replay value such as tagging a certain number of spots at the game's stages or reaching a specific point score. Some Sega games back in the day were challenging as Jet Set Radio can be one of those especially near the end. Old school game design philosophies kick in such as starting a whole new level over again if you lose all your health or didn’t beat a mission in time. There are many reasons most old school game philosophies don’t work in today’s world of video games and playing through Jet Set Radio reminds me of that. There are some, however, that will appreciate the challenge whether they’re playing for the first time or revisiting it for nostalgic reasons.

While it is great to see Jet Set Radio’s cel-shaded graphical style get the widescreen and HD treatment for today’s consoles, the performance issues make this port a big disappointment, especially coming from Sega, who has a good track record of pumping out HD versions of their classic games for the downloadable platforms. The PS3 version hitches and stutters periodically while the game is in motion. In addition, the framerate slows down significantly when lots of things are happening on screen. It is a bummer that this HD port has performance issues considering how beloved it is with fans that loved the original. The music is as memorable as what you remembered back in 2000 with basically all the game’s soundtrack returning, which includes licensed tracks by Rob Zombie and Jurassic 5.

It is unfortunate how disappointing the HD port of Jet Set Radio is at the end of the day. While it will still be remembered as a beloved game with lots of style, especially with its cel-shaded graphics and memorable soundtrack, the gameplay simply has not aged well. The frustrating, unforgiving, and clunky controls are a big part of it. Playing the game’s campaign in general felt dull for the most part. The camera issues are also a big problem back then and still now even though they tried to fix them with new controls. Another big disappointment with this port is the performance as the game stutters and clugs a lot, especially on the PS3 version compared to the others along with the framerate slowing down when too much is happening on screen. In one hand, it is one of those classic games I glad I played now, but on the other, it is a reminder that certain old school game design philosophies just don’t work in today’s games. For $10, Jet Set Radio HD is still worth playing if you’re playing for the first time wandering why it is one of the more beloved games on the Dreamcast and those wanting to revisit the streets of Tokyo-to on today’s consoles. However, this port of those cases that maybe some games aren’t meant to be brought back for today’s audiences.
Rating
6.0