"Kirby is all "clayed" up in his latest adventure that features a beloved game mechanic makes it's return."
By: Jeffrey Dy | Wii-U Reviews | February 23, 2015
Nintendo rarely tends to change up the formula with their popular characters such as Mario and Link. The only character that they take chances on the most to me is Kirby. Compared to Nintendo’s other superstars, you can come up with endless ideas because of what Kirby is. That is why he has more games out every year besides the mainline ones where he sucks in enemies stealing their powers. From pinball, Breakout, tilting and tumbling, and yarn, Kirby has done it all for over 20 years. Nintendo and HAL decided to give a beloved mechanic from the DS cult hit Canvas Curse another shot with Kirby & The Rainbow Curse for Wii U. For once, there is a Wii U game that relies on the gamepad with the drawing line mechanics, but does it live up to Canvas Curse and other Kirby games that gone outside the box? 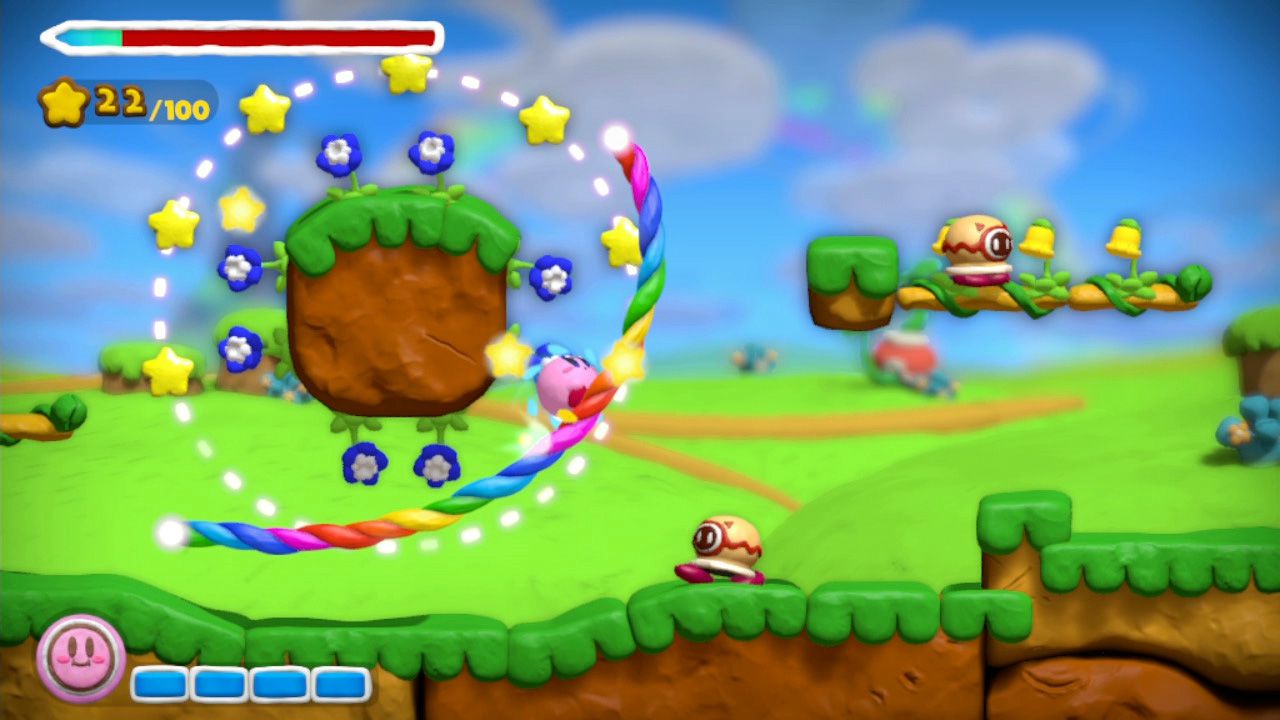 Dream Land is frozen and colorless by Claycia, the game’s villain as Kirby and Waddle Dee are saved by a paintbrush fairy named Elline. It is up to them to restore Dream Land back to it’s original state. As expected from Kirby games, don’t expect too much in terms of story but the setup is good enough to get the game off and running. Kirby & The Rainbow Curse follows similar Nintendo tropes such as your desert, water, sky and lava themed worlds along with being not that much of a challenging game. Sure, the difficulty ramps up a bit halfway through at the sky world but Kirby fans as well as Canvas Curse fans won’t have much trouble going through the game’s seven worlds in a few hours.
If you’re not familiar with Canvas Curse, Rainbow Curse is all about controlling Kirby by drawing lines, or as the game calls it Rainbow Ropes, to transverse from points A to B. Everything is controlled by the gamepad’s touch screen and the stylus just like the DS original since you touch Kirby to make him dash. Dashing is self-explanatory and his main attack against enemies. Getting 100 stars gives Kirby a star dash attack to break certain blocks and usually used to get treasure chests for collectibles and dealing more damage in boss fights There is a limit with drawing lines with the meter on the upper left corner, so efficiency matters especially in the second half where bottomless pits and instant death situations are present. The rope mechanics work great on this Wii U iteration, but there were frustrating times where Kirby will go on the wrong direction than your intention of where you want him to go. It is likely more on my end where you have to draw lines on specific directions. 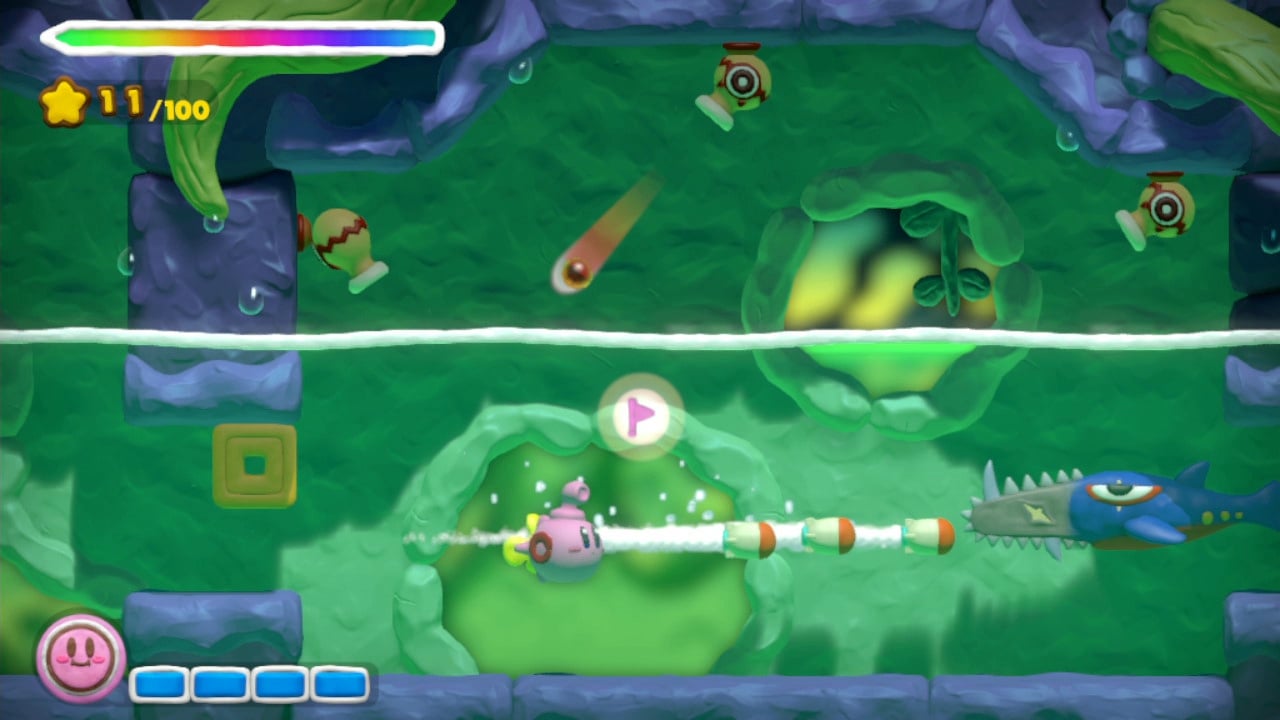 Kirby & The Rainbow Curse’s other made or break moments besides the core mechanics are the level design. The game does get clever mixing things up a bit at the various worlds. Drawing lines to shorten waterfalls/electric fences so Kirby can move through, clearing up mines by drawing through them and erasing sand for Thwomp-like enemies to fall are some of many examples. Dealing with the water levels especially where there are currents can be a pain if things don’t go your way. Kirby does turn into a tank, a submarine and a rocket in some levels, but the rope mechanics are also used in interesting ways. While the tank is self-explanatory where you touch the screen to fire at enemies and obstacles, the submarine is surprisingly complex where you use the ropes to navigate his torpedoes that automatically fire along with just touching the screen at a specific point to move around. The rocket turned to be the most frustrating of the three to me because more precise line drawing is required for movement.
The second half of the game in general gets repetitive with repeated level design and boss fights despite the change in worlds. The vehicle levels follow a similar structure the second time around and there’s boss refights with them having some new attacks. Series staple Whispy Woods is back again in this Wii U iteration along with two other bosses and a final encounter with Claycia. These repeated levels could have been used for more creative level design especially when the story mode playthrough itself is about a few hours long. Rainbow Curse definitely has it’s high and lowlights in it’s story mode, but luckily there’s some replay value to keep players going after beating it.

All of the story mode’s levels can be replayed for gold medal opportunities, collecting a certain number of stars, and getting the numerous collectibles such as figurines, music tracks and diaries, which are the cutest things in this game. These collectibles are in treasure chests as there are usually five in every level minus boss fights. Even dying a few times in a single level gives you the option to move on to the next level like the New Super Mario Bros. series. Going for 100% can be a bit frustrating when some levels are autoscrollers and missing a treasure chest means a replaying the whole level another time. Besides the collectible aspect, challenge mode is there for those that thought the story mode is too easy. Challenges are also unlocked in the story mode and they are quick one minute mini-levels of getting the treasure chests within the time limit. They also require more speed and precision than what the story mode offers.
Co-op up to four players is there with Waddle Dees joining the fray to make certain levels and challenges easier. Amiibo support is also implemented into Rainbow Curse as one time uses per day (assuming you can get them). The Kirby amiibo gives Kirby infinite star dashes, Meta Knight lets it have more attack power and the King Dedede one allows it to have two more bars of health. Make sure you stay alive when you have these activated because they’re gone if you lose a life.
Ever since it was announced at last year’s E3, Kirby & The Rainbow Curse’s instant hook other than the return of the Canvas Curse mechanics is the clay-esque graphical style. The game does look beautiful on both TVs and the gamepad to the point it is arguably the best looking game on the Wii U. However, the big problem is you won’t be able to see the graphics truly shine due to your attention being focused heavily on the gamepad screen drawing Rainbow Ropes. I’m in the camp that doesn’t mind Rainbow Curse being primarily a gamepad only game as I could something else on my main TV, but I can see why people would rather enjoy the graphics on a bigger screen. The music is also great especially for Kirby fans where older tracks that are remixed here can be unlocked even though they can be only played in the jukebox screen.

Good thing Kirby & The Rainbow Curse is priced at $40 because it is an enjoyable game to play on a weekend after a long and stressful week. If it was at the regular price, this game would not have been worth it, but there is enough content to satisfy the $40 price point from it’s story mode lasting a few hours, challenge mode, collectibles to find and co-op. The core gameplay mechanics from Canvas Curse are great to see again on a console and that alone will please fans of that DS hit, but the level design is however hit and miss. There are some clever ideas and that it’s big highlight, but the repetitive boss fights and certain style of levels being repeated one more time does sour the experience a bit. Plus some frustrating moments will happen where things don’t go your way with the controls especially when going for collectibles. It is however one of the best looking Wii U games now and boasts a great soundtrack that fans will enjoy. While flawed, Kirby & The Rainbow Curse is still worth playing for Kirby fans and those looking for a game that demonstrates what the Wii U gamepad’s touch screen is capable of.
Rating
7.0
Pros