‘Madagascar 3’ Bests Both Cruise and Sandler

This weekend at the box office it was again the return of the lovable toones that held off vehicles from two bankable leads, as Madagascar 3: Europe’s Most Wanted handily defeated Rock of Ages and That’s My Boy.

Escaped zoo animals again proved the popular choice among audiences, as for a second weekend in a row, Madagascar 3 took the top spot by a wide margin with $35.5 million. This ups its North American total to $120.5 million and worldwide to $277.5 million. 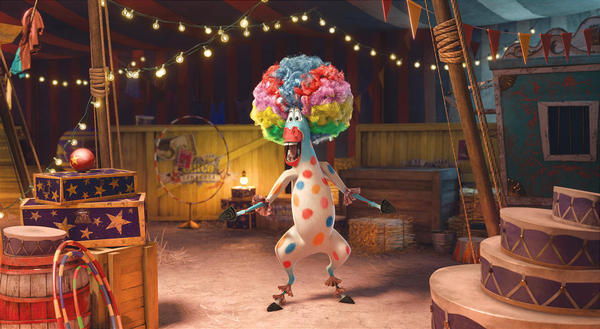 This franchise rarely sees second weekend holds on par with Pixar fare, and this third entry in the franchise was bang on what would be expected. The original fell 40 percent during round two, the second 44 percent and “Most Wanted” by 41 percent.

Falling rather heavily as should have been anticipated for a sci-fi epic, Prometheus followed up its stellar opening with a 60-percent tumble to $20.2 million and an $88.9 domestic tally. The silver lining is that the Ridley Scott Alien prequel saw a solid bump from Friday to Saturday meaning the space opera should stabilize more reasonably in the coming weeks. Worldwide, Prometheus has now amassed an excellent $217.5 million with plenty of important international territories yet to open.

Missing all the important notes in third was the star-studded, head-banging musical Rock of Ages, which barely managed $15 million. The easy thing to do is blame Tom Cruise and claim the success of Mission Impossible: Ghost Protocol to be a fluke, but considering he was only a side character in what was very much an ensemble piece, that would be unfair.

Surprisingly, this is the sixth best opening ever for a musical. It beat recent fare such as Burlesque ($11.9 million), but was way off from Hairspray ($27.5 million) and will need strong international numbers to recoup its $75-million budget.

Faring even worse in fifth, Adam Sandler’s latest by-the-numbers “comedy” That’s My Boy was only man enough to find $13 million over the weekend. Audiences are clearly still feeling jilted from ponying up their hard-earned money for Jack and Jill last year and avoided this one out of spite.

The R-rating did not help either which alienated his core base of juveniles. In fact, the only two movies from Sandler’s resume carrying an R-rating previously have been his dramatic efforts Reign Over Me and Punch-Drunk Love, which ironically are some of his best. That’s My Boy posted the 17th worst Sandler opening.

In the realm of limited release, both Wes Anderson’s Moonrise Kingdom and newcomer Your Sister’s Sister both fared very well. “Moonrise” expanded to 178 theaters and took in $2.2 million for a $6.8 million cume, and “Sister” collected $117,000 for a solid $9,000 per-theater average.

Next weekend the apocalypse, a vampire uprising and a Celtic fable collide as three unique offerings compete for the approval of finicky audiences. Pixar’s Brave will lead the pack and charge boldly into 4,000 theaters, Abraham Lincoln: Vampire Hunter will target those with bloodlust in 3,000 and Seeking a Friend For the End of the World is being partially dumped in just 1,400.