By: Jeffrey Dy | PS3 Reviews | September 30, 2012
Since 2009, Capcom started working again with Marvel in the world of fighting games. They were able to release Marvel vs. Cacpom 2 on Playstation Network and Xbox Live Arcade as proof that they are back together with more to come in the future. Two years later, Marvel vs. Capcom 3 finally came out after a long wait from the last iteration as old and new fans were glad characters from both universes were able to clash again and work together. Late last year, they released the Ultimate version with more characters, stages, and gameplay changes from the vanilla entry as it has been the hypest fighting game to watch on streams. Now, Marvel and Capcom are releasing more of their classic fighting games on downloadable formats with Marvel vs. Capcom Origins. This new release features the one-on-one classic Marvel Super Heroes and the first Marvel vs. Capcom game. Both were great games back in their heyday and still are today in this $15 package.

Marvel Super Heroes originally came out in 1995 at arcades and it was the first one-on-one fighter by Capcom to feature Marvel’s infamous heroes and villains. It basically set the standards for the versus games from the air combo system and cool looking super moves that featured the fighting game debuts of Spider-Man, Captain America, Hulk, Iron Man, and others. Unique to this game however is the gem system. Yes folks, Capcom has messed around with gems before it was modernized in Street Fighter X Tekken. For storyline purposes, the gems were centered around Thanos’s infinity gauntlet since he was the final boss of this game. Each gem had its own stat boost for a short period of time such as more damage, moves coming out faster, health being healed, etc. Each character also gets a special bonus activating a certain gem as well. Blackheart, for example, can turn invisible temporarily, with the reality gem. Marvel Super Heroes might be a little slow paced compared to later versus games, but it is still fun to play through for nostalgic reasons. 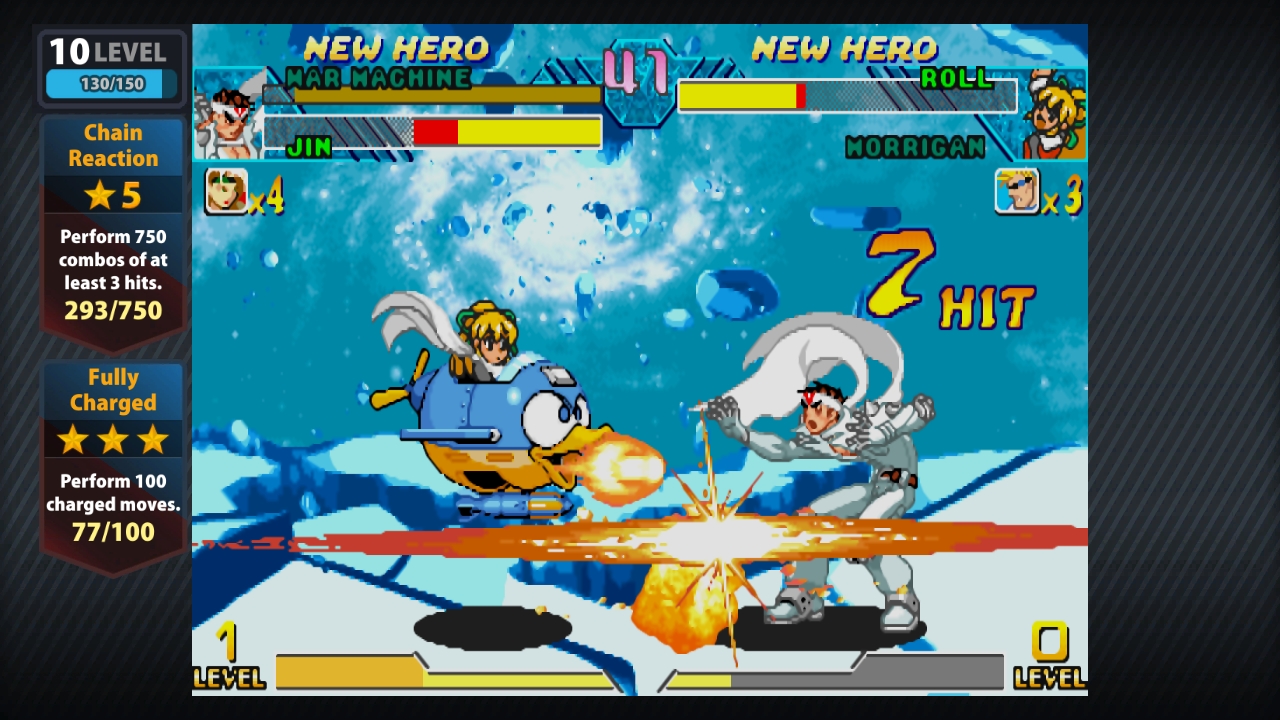 The first Marvel vs. Capcom game was originally released in 1998 and Capcom’s third tag team-based fighter featuring the two universes. Most of the characters in this roster were playable in prior fighting games, but Capcom was able to dig deeper into their catalog of characters to round out the cast. Strider-Hiryu, Captain Commando, and Jin made their fighting game debuts while Venom has his debut from the Marvel side. Marvel vs. Capcom puts more emphasis to team mechanics compared to prior versus games before this. Assists are selected before a match starts as characters from both universes can help along, but with limited uses. Dual team attacks allow both your characters to attack your opponent for a limited time with unlimited super meter. This was a tactic to go with in high-level play to cause some major damage and safely tag in your partner as well. While Marvel 2 and 3 improved on some these gameplay concepts dramatically, it was nice to revisit this first entry to see how things were then compared to now.

Both games in Marvel vs. Capcom Origins were six-button fighting games, so for those who are too used to Marvel 2 and 3’s simplified controls, it could be take a little time to get used to the six button layout again. Since these games were released in the mid and late 90s, the final boss fights against Thanos in MSH and Onslaught in MvC can be difficult if you’re not too careful. When playing through the standard arcade game, the computer A.I. can snatch victory away from you at an instant including the boss characters. After last year’s great effort with Street Fighter III: 3rd Strike Online Edition, developer Iron Galaxy are back again handling these ports. The in-game achievements system and unlockable content from the vault will be familiar if you played 3rd Strike OE. Getting achievements earns you vault points to buy artwork, endings, and the hidden characters from both games without inputting a code to play as them. 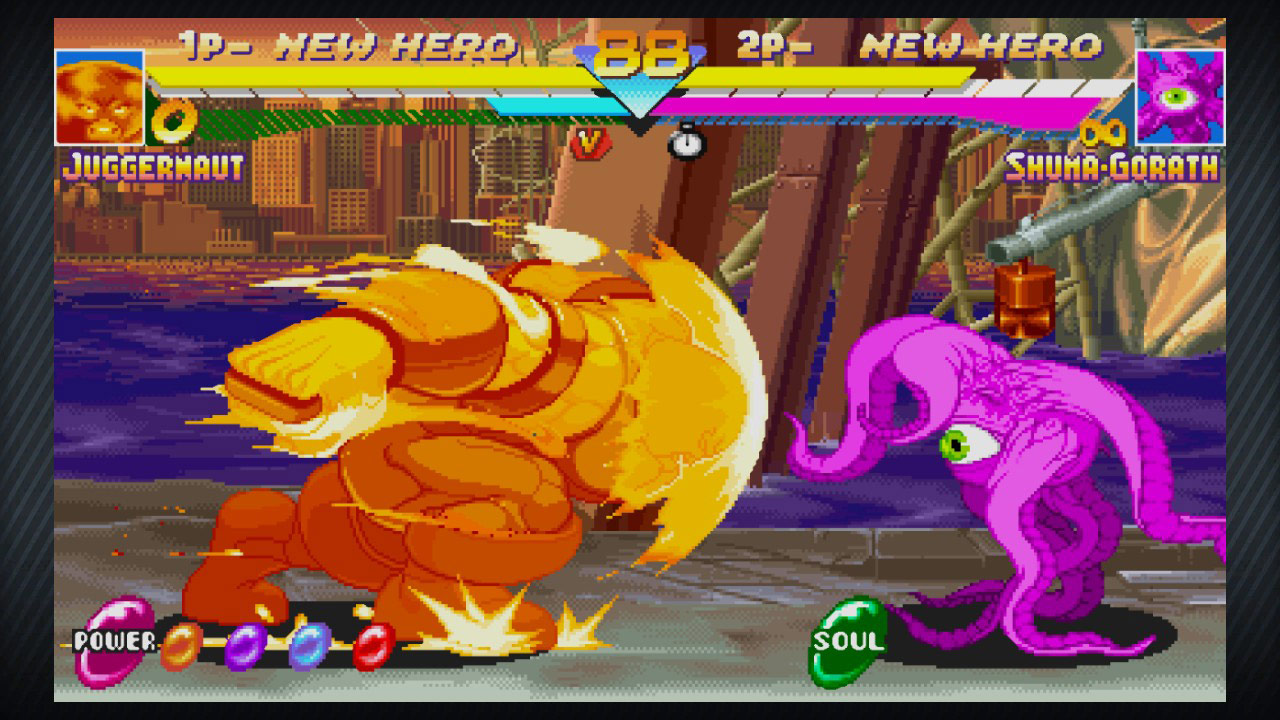 The main crux of Marvel vs. Capcom Origins is the online play for both games. This is the first time these games are playable online on a console unless you have been playing in GGPO for numerous years. Speaking of GGPO, Origins uses the infamous netcode that was in 3rd Strike Online Edition and Skullgirls. Matches have little to no lag at all in both games, but Iron Galaxy was able to fix some of the flaws that they had in 3rd Strike OE in terms of implementation. The standard ranked/player match options are there along with lobbies with up to six players, which is pretty much the norm in today’s fighting games. You can also save replays too for both games, but the upload to YouTube option that was in the 3rd Strike re-release is not included in Origins, which is unfortunate. Besides that, online play is a blast on both games, but be prepared to get owned by tournament level shenanigans such as corner infinite combos and other cheap stuff.

Graphically, both games in MvC Origins still look like their original counterparts. As with these releases of fighting games on the downloadable services, there are filtering and widescreen options to mess around with including scan lines if you want to play like it was at arcade machines. The default screen is 4:3 with the in-game achievement tracker on the borders, but you can enable widescreen if you think the achievements are in the way. For purists’ sake, I left it at the normal 4:3 to keep it faithful to the original experience in the 90s. The classic music and sound effects are also untouched in this package with no arranged remixes. It was great hearing those again as I personally missed the “Infinity” voice whenever a character’s super gets activated that is not in today’s versus games. For those that grew on Marvel’s 90s cartoons such as X-Men and Spider-Man, hearing those voices again also brings things back to those good old days too.

For $15 or 1200 Microsoft Points, Marvel vs. Capcom Origins is a great package to revisit two classic fighting games whether you loved them back then or you’re a new school player wondering how the franchise first started. Sure, I wished it included the whole versus collection as it is missing X-Men: Children of the Atom, X-Men vs. Street Fighter, and Marvel Super Heroes vs. Street Fighter, but the two games Capcom chose to bring back are the right choices. Both games are still fun games to play as they were when they originally came out. It takes some time to get that old school mentality back in with the six button layout, but purists will be executing crazy air combos and supers in no time.The netcode for the online play is pretty good with Iron Galaxy using GGPO, but of course you’ll eventually run into someone that has a bad connection or high ping. Marvel vs. Capcom Origins is another great effort by Capcom and Iron Galaxy to be added into your downloadable game collection of classics to revisit.
Rating
8.0