NEW YORK--Discussing topics ranging from the original casting process to what new material the crusading journalist will be encountering in the upcoming season, Murphy Brown star Candice Bergen and creator/executive producer Diane English reflected on the show, the characters, and what it means to 70 in Hollywood while still making cutting-edge-comedy.

Speaking at the Paley Center for Media, the two discussed the long-running show, which has returned to CBS this year after originally airing 1988-1998.

English and Bergen discussed the moment--now 30 years ago--where the show came together. English created the idea while stuck in traffic in an LA traffic jam and said by the time she was home she had the series idea and characters already worked out in her head.

Finding a star for the show proved to be more difficult, English said. 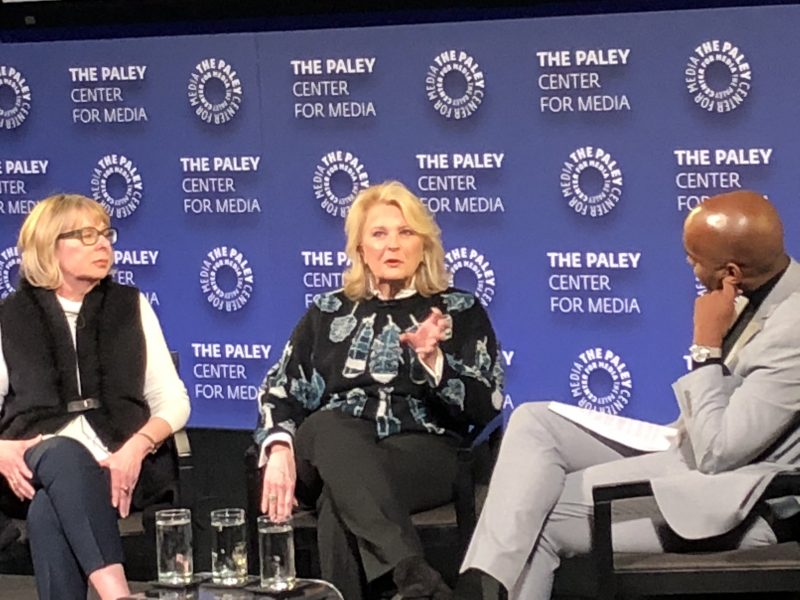 Bergen said that she almost didn’t become Murphy Brown for multiple reasons. “I just didn’t read it (the script). It stayed on the bench at the foot of my bed,” she said, and finally she was bugged by her agent to make a decision, at which point she actually read the material.

“It was sent by a little local beginning agent (at the time) who is now the king of agents, Bryan Lourd, and I read it on a plane and thought oh my God,” Bergen said.

Not only did it immediately resonate with her, Bergen said it reminded her of the Hollywood comedies of the 1940s with its sophisticated qualities.  Despite being excited for the opportunity, when she auditioned for the part she had an off day and was “terrible,” she said.

English agreed. “It was a really bad reading,” and CBS executives wanted someone who showed more passion and fire like Heather Locklear, English said, but “I made the case rather forcefully” for Bergen to land the part.

“We read the script out loud on the floor of her apartment. It was brilliant. I went back (to the network) and said this is Murphy...She had an Oscar nomination for Comedy and was the first woman to host Saturday Night Live. She hosted it five times.”

English convinced network executives, Bergen became Brown, and the rest is history. The show aired for a decade and the cast had an “emotional goodbye” twenty years ago. Until it wasn’t a goodbye. 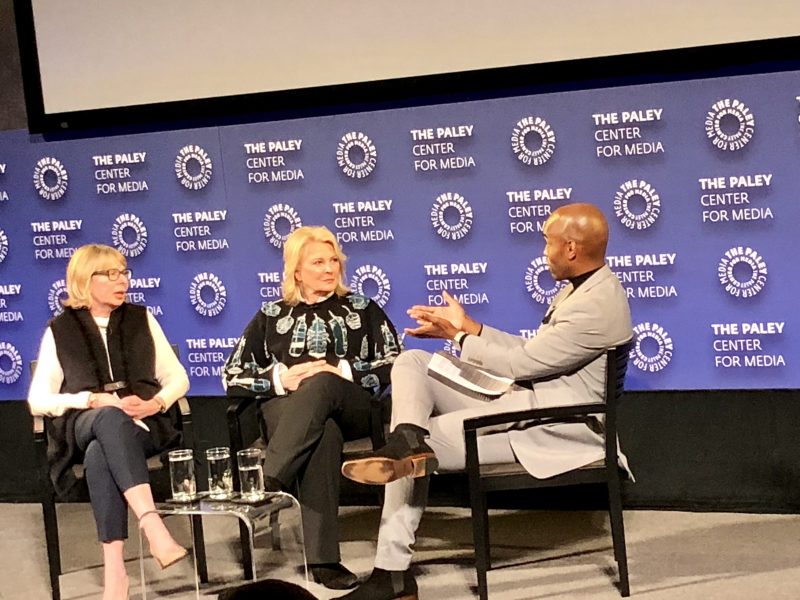 While the show won multiple Emmy awards and secured its place in history, it’s been the return of the show that has had much of America and the media talking this summer. How would Murphy Brown fit in during a Trump Administration? What topics would it address?

Bergen said though technology has changed in the twenty years they’ve been off the air, the process itself is still the same.

She said she has “nothing” to do with the writing of each episode, but there’s one factor that has helped the show enormously to continue its continuity twenty years after going off the air:

“We have ten writers and seven of them are the original writers from the show 30 years ago...That is a big advantage. They are so familiar with the characters and rhythm of the show,” Bergen said.  “The new writers are...younger and help teach us what ‘woke’ means and the cast is so respectful of the quality of the writing...because we know the dreck that is out there...We rarely change a word because of the quality of the writing,” she added.

This season, the show has or will address issues like the #MeToo movement, sexual harassment in the workplace, the expanding role of technology and “Twitter wars” between journalists and Washington, the midterm elections, Afghanistan, and the immigration issue in a “powerful” episode next month, English said.

While the issues drive the show, there is also much more of a need today to promote shows than in its original run, Bergen and English said.

“Now you have to really make a lot of noise to get noticed,” English said. The cast spent much of the summer filming promos, going on interviews, and creating a massive amount of pre-show filming. 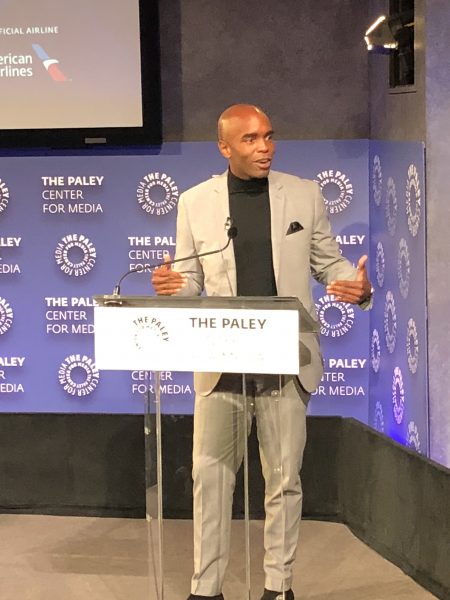 “Diane...writes better and with more energy. The woman has stamina and brilliance--much more than when we were shooting originally” Bergen said.

She also promoted what she said was one of the best episodes she’s been a part of in the history of the show.

“I just read our Thanksgiving episode, which airs on Thanksgiving, written almost entirely by Diane. It’s one of the most brilliant episodes I’ve (been a part of). It swings from hilarious comedy and ends in tears...it’s very powerful, very powerful. Don’t miss it!” she implored the audience. She said the show centers around immigration, but was mum about overall details of the episode.

Bergen hinted there might be another reason why people are still tuning in to Murphy Brown.

“People need comfort. I think the last couple years have been upsetting to people and disorienting and the show might be about (reminding them) that’s when things were okay and if I watch that show it will make me feel like things are okay again,” Bergen said. She said people have given her constant thank-you’s on Instagram and she’s glad it’s bringing joy to fans.

While there is no shortage of topics for Murphy Brown to cover in this season’s 13 episode run, English noted the hardest task is staying ahead of the news cycle.

“We choose our topics because not just because they’re in the public conversation so much but we need to know we can find ways to find all the funny around it without being disrespectful to the subject matter so that’s a big criteria for us in the writer’s room,” English said.

Bergen said English insists on one of the tightest turnaround times on television for each episode--3 weeks--so they can stay as close to the current events news cycle as possible to make the show even more relevant.

Another key change from the show’s original airing and today is America itself and the television demographic landscape. English admitted the original series lacked diversity. “It was a pretty white show” and this year’s reboot needed “to look like the rest of the country.”  This year the show added Adan Rocha as an immigrant/dreamer, Nik Dodani as Social Media Director, and Merle Dandridge as Network Executive. 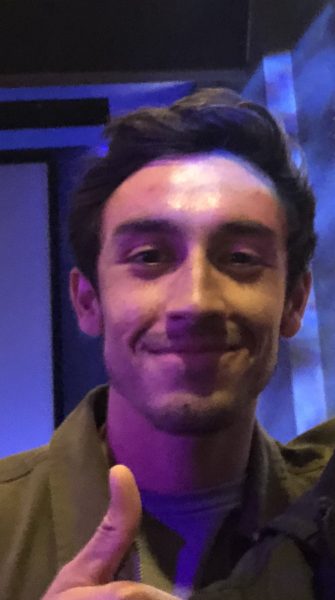 While the show has been critical of journalists (showing Murphy goaded into a twitter war with the President in this year’s pilot and critiquing other journalists in the White House Press Room for not walking out when the Press Secretary blatantly lied in an answer), for the most part, English and Bergen said they hope the show finds a heroic journalist in a time the nation needs one.

Cast members were more than ready to return, although Bergen and English said partly that was because of lack of work for aging actors.  Bergen, at 72, and English, at 70 represent what moderator Chris Witherspoon said is “the oldest writing/acting team on network television,” drawing a lengthy applause from the audience. The show moved to New York City this year to film, at Bergen’s request. It also added veteran actress Tyne Daly (also 72) to the mix.

“Many of us had given up any hope of working again,” Bergen joked.

Though Bergen said she did “none” of the creative work behind the show, English countered that the idea for Hillary Clinton to guest-star earlier this season was truly Bergen’s idea.

English said there was a “heavy veil of secrecy” and those scenes were not filmed live in front of an audience but instead two weeks later. Additionally, press screeners sent out did not include the Clinton clips and simply had a screen graphic that said “special guest star” to keep it a true secret. They both said working with Clinton was an honor and something they greatly enjoyed.

Fellow castmates Tyne Daly, Joe Regalbuto, and Adan Rocha attended the event in support of Bergen and English, mingling with the crowd at the Paley Center.

The event was part of the annual PaleyFest New York, a series of panel discussions with the stars of hit television shows. It runs October 5-18 at the Paley Center for the Media on West 52nd Street in New York. Later this week the cast of The Connors will discuss life after Roseanne, and the cast of Top Chef will talk about what’s new for the cooking-based reality show.