Need for Speed: Most Wanted – Review

Ever since Criterion Games took their first crack at the Need for Speed franchise with Hot Pursuit two years ago, it looked like the series was back on track after a couple disappointing installments. While Black Box’s The Run last year wasn’t that bad, the makers of the Burnout series are now in full control of EA’s flagship racing franchise. Here we are this year with Criterion back at the helm with Need for Speed: Most Wanted, which I’ll say right away that it has no relation the game that had the same title released in 2005. Ever since its announcement earlier this year, Most Wanted has been known as a spiritual successor/sequel to Burnout Paradise because it takes place at an open world city and has a lot of similar gameplay elements. That seems to be the case, which is both a good and bad thing. While it retains those gameplay elements and improve on certain things, Need for Speed: Most Wanted is a great racing game despite some flaws.

This latest Need for Speed game starts out with an introduction that lays out the groundwork what to do in the game and then you seamlessly start playing without waiting for a load time. The goal in the single player portion of the game is beat the ten most wanted cars at Fairhaven, the city where all the driving and racing takes place. In order to unlock those races against cars such as the McLaren MP4, Lamborghini Aventador, and the Bugatti Veyron, you need speed points by winning events, evading pursuits, which I’ll talk about specifically later, driving through security gates, and smashing billboards. This sounds very familiar to Burnout Paradise because that is basically what you did in that game minus the police stuff. If you loved that formula in that game, you’ll have no problem loving it again in Most Wanted. My issue with it, however, is that Fairhaven is not really a memorable city to drive in compared to Paradise City. I was more motivated to find shortcuts in Paradise compared to here in Most Wanted where it basically holds your hand of giving you a path on the map to follow during races. 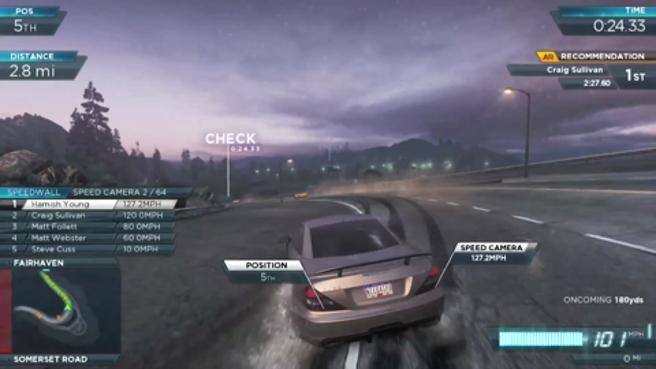 Each of the 41 licensed cars in Need for Speed: Most Wanted are spread out throughout Fairhaven and once you find a certain car parked somewhere in the city, as the game calls a jack spot, that car is now unlocked for the rest of the game. For instance, you can find a really fast car in mere minutes and you’re pretty much set in terms of having a go-to car. However, you can’t just have one car to beat everything as each of the 41 cars have their own sets of five events to beat. These events consist of sprint (point A to point B) races, circuit races with laps, speed runs, where you have to maintain a certain average speed, and ambush, which you have to escape the cops in a limited time. Once you keep doing these events with all of the cars, they do get repetitive, especially if most of them take place on the same track or area. The only difference for most of these events are playing them in different cars. Fortunately, repeating events with different cars can be started right away on the Easydrive menu after they were done once. The events also could of used of more variety, but that variety is saved for the multiplayer, which I’ll also talk about later. Winning these events unlock upgrades to your cars such as nitrous, better tires for off-road, and other parts that increase your toughness and handling stats. The upgrades can make a big difference in tougher races, specifically the most wanted races as they give you a better chance to win despite the rubberbanding AI.

Since it is called Most Wanted, what about the gameplay elements that involve the police? Honestly, the cops are more of a distraction and an annoyance than formidable opponents. Any time you’re speeding around the city and the cops see you, a pursuit begins. If you want to start a race during a pursuit, you have to escape the cops and that could be a pain to deal with. There is no harsh penalty with getting busted since you just respawn at the car’s jack spot. In the one-on-one most wanted races, the cops usually use roadblocks and spike strips in attempt to bust the racers. These roadblocks and spike strips usually start getting placed around heat level 2 of 6. If hit by spike strips, the car’s tires will be blown up and can be recovered by driving through a gas station along with change the car’s color. The heat level is pretty much similar to past Need for Speed games where once you escape the sight of the cops, you enter cooldown and you have to find a safe spot that the cops can’t find you. The cops don’t really much of a threat in regular races, but become annoying in “ambush” events since you have a limited time to escape them. 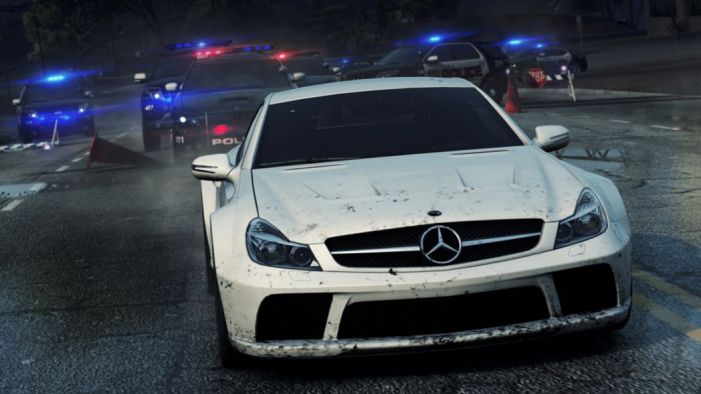 Since the game is more of an arcade racer, the handling of the cars are great for both casual and hardcore players. Also taken from the Burnout games, cars can drift for long distances pretty easily and you get away from some crashes. The takedown mechanic is also back if you want to be aggressive against the opposition and the cops. One crash in most of these races can result in pausing and then restarting, but with some upgrades, there is enough time to come back and win if you crash at the beginning of a race. The opposing A.I. is also a mixed bag in these races. They’re pretty much an on and off switch. Sometimes they take a day off and let you win in dominating fashion, but they can also turn on and actually try to take you out. While the single player in Need for Speed: Most Wanted is a bit of a letdown, it still carries most of what made Burnout Paradise amazing and that is enough to satisfy fans of the racing genre.

The game truly shines in the multiplayer where it also retains familiar elements to Paradise, but refines some of them for the better. The core multiplayer that is up to eight players in one game consists of speedlists, sets of five events that are randomized ranging from regular/team races, speedtests, and challenges. Just driving to the meet ups alone can be pretty competitive even though the first one there gets the points, but players are willing to take each other out. At least if some players are lazy to drive to the meet up, the game will eventually relocate them there to start the event. Examples of speedlist events are who can drift the longest at a certain area, highest jump, or whoever is the fastest through a specific section. Opposing players can completely eliminate you from the event by a takedown, which adds to the insanity. If you remembered the challenges from Paradise, they’re basically similar here in Most Wanted where the group has to collaborate on a specific goal such as meeting up at a specific spot after jumping off a crazy ramp or having a combined number of takedowns. Doing well at speedlists earns you speed points as they’re culminative for both single and multiplayer. The multiplayer in general is full of fun and chaotic times since most of the online players just want to mess around.

You’re competing at all times not just during Most Wanted’s multiplayer against other players, but also against friends thanks to the return of Autolog that was first introduced in Hot Pursuit. Autolog adds more replay value to the single player as players compete for fast times at events, longer jumps at billboards, and fast speeds after triggering speedtraps. It is also a part of how beautifully streamlined some aspects of the game are. Most of the in-game actions such as setting destinations for races, activating upgrades, and changing cars can be done without pausing the game. This is something I want to see more in other games sometime in the future in terms of setting things up on the fly without pausing. 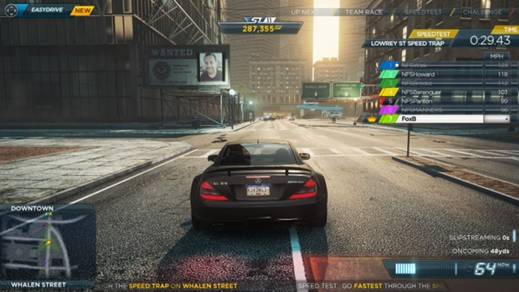 While Need for Speed: Most Wanted looks like a beautiful game, the numerous technical issues are the game’s biggest disappointment, especially being developed by Criterion. Even though it was expected to run at 30 frames per second like Hot Pursuit, there are framerate drops when too many things are happening. On my personal experience on the PS3 version, the game froze up for a couple of seconds just to load the missing textures and pop-in multiple times. That alone is very frustrating to deal with especially during close and tight races in the single player where one mistake can cost me a win. I also encountered game crashes as well and sometimes the game was stuck on the pause screen, so I had to exit back to the PS3’s XMB and boot it up again. It is a shame that a Criterion game is filled with such issues since they had a good track record in the past making well polished games.

What you can count on Criterion to deliver in these racing games are the sounds and they are top notch for their standards. Barreling through a freeway tunnel at breakneck speeds is one of the most satisfying things you’ll hear in a game this year. The car sounds also sound great with their roaring engines and the crashes sound painful at times too. Since this Need for Speed game has licensed cars, the crashes are bit disappointing compared to Criterion’s past work with the Burnout games, but you gotta keep those car manufactures happy somehow. The soundtrack is good for the most part that covers a variety of genres like rock, electronic, and dubstep. Big names such as Muse, Nero, Deadmau5, Skrillex, and Green Day have featured tracks in Most Wanted.

Despite some concerns and flaws, I still had a great time with Need for Speed: Most Wanted. I had a lot of expectations for the game since it was billed as a spiritual successor/sequel to Burnout Paradise, one of my favorite racing games this console generation, and that alone is what made me excited to play this Need for Speed iteration. While it plays a lot similar to that game, I just didn’t feel the same motivation to explore everything Fairhaven has to offer compared to Paradise City. Most of what worked in Burnout Paradise works here in Most Wanted in both single and multiplayer, but I was a little let down playing the single player however. Multiplayer is definitely a blast with other online players and friends as I liked the improvements Criterion for it to be a better experience. What Criterion dropped on the ball though are the technical issues the game is filled with, which is disappointing considering their track record. Need for Speed: Most Wanted is still a great arcade racer to get this year and worth playing if you love racing games, but don’t expect it to live up to the Criterion pedigree.