New Super Mario Bros. U Review: Is Mario’s HD Debut The Game to Get on Wii U?

It's been sixteen years since we last saw a Mario game make launch for a Nintendo console. The New Super Mario Bros. franchise has been the plumber’s return to his 2D roots for six years, but the formula is starting to get stale and well, not so “new.” New Super Mario Bros. U marks Mario’s HD debut on the Wii U and the fourth game in the series. After the disappointing New Super Mario Bros. 2 on the 3DS, which came out earlier this year, does this Wii U iteration live up to the legacy of 2D Mario games? The answer to that question is both yes and no. There are times I’m having a blast with the game, but at the same time I feel like I’m suffering from franchise fatigue. New Super Mario Bros. U is one of the must-get launch titles for the Wii U, but be prepared for deja vu, especially hardcore fans.

You know the drill with these Mario games. Bowser kidnaps Princess Peach and it's up to Mario to save her and the Mushroom Kingdom from Bowser’s clutches. The structure remains the same as the past three games with a grassy world to start things off, a desert world, ice world, water world, and so on. What makes NSMBU feel like deja vu is that Nintendo kept these worlds in the same order and that alone makes the game tiresome from the get go. It would be nice if they mixed things up for once, but that does not seem to be the case. Also similar are collecting three star coins per level and beating the Koopa Kids the same way you beaten them for over two decades. NSMBU does have some redeeming qualities because it is the most feature-filled game of the franchise yet with extra modes, and Wii U specific features. 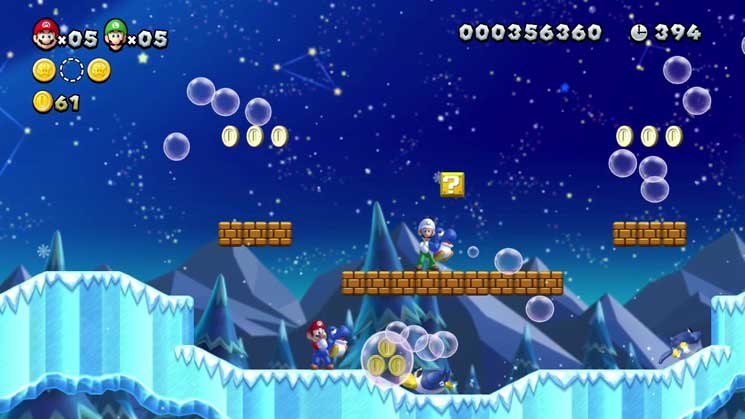 If there was a previous 2D Mario game New Super Mario Bros. U is trying to replicate, it is the Super Nintendo classic, Super Mario World. The overworld map has similar vibes to that game and certain enemies make their NSMB debut here. There is only one powerup in NSMBU and that is the flying squirrel suit. This suit allows Mario to glide for a temporary amount of time, but can get an altitude boost with a shake of the Wii Remote or the Wii U gamepad (you can also press ZR on the gamepad. Mario can also cling into walls with the suit on too. The squirrel suit is a worthy addition to the stable of Mario powerups as the fire flower, ice flower, and the mini mushroom are back in NSMBU. Baby Yoshis make a return from Super Mario World with separate abilities. The pink baby can be used as a balloon for Mario to float around. The blue one can fire bubbles and turn enemies into coins. The yellow one is used as a light Mario can carry around for stages covered in darkness. Regular Yoshi is also back, but only in a handful of levels like New Super Mario Bros. Wii.

The level design on par with previous games of the New franchise. There are only a handful of standouts though that really impressed me from either a gameplay or graphical perspective. The same goes for the difficulty too as there are some hard levels, but these games are mostly on the easy side because of how many 1ups the game gives out like candy if you’re an experienced Mario player. The Super Guide returns from NSMB Wii if you die consecutive times in a level and Luigi beats the level for you. As expected with these Mario games, it doesn’t take long to beat the game on a normal playthrough, which is six to eight hours, but it takes longer to 100% the game and find the game’s secrets. Despite my personal issues, it still feels and plays like a Mario game and that’s good enough for both casual and hardcore audiences. 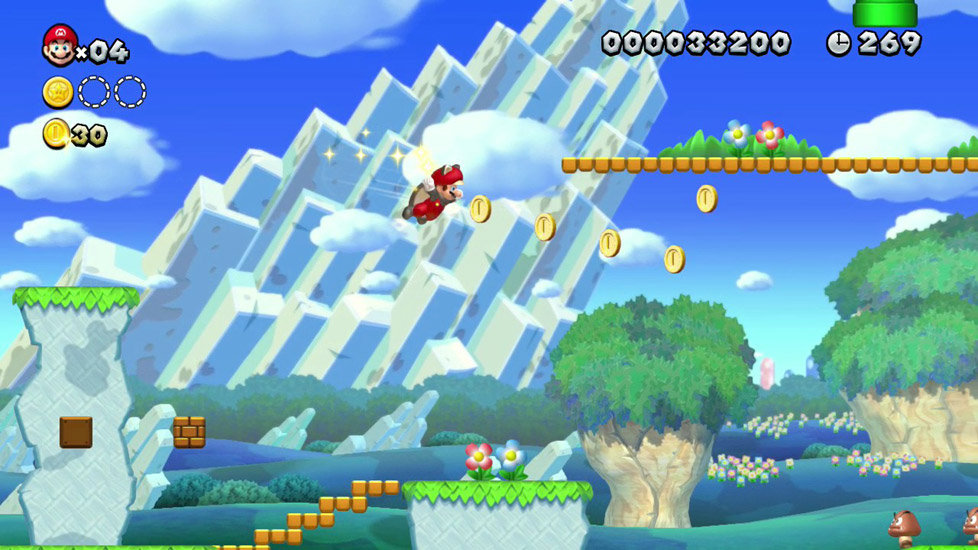 Besides playing the main story mode alone, up to five players can play co-op in New Super Mario Bros. U. Four players use Wii remotes as the playable characters while the fifth player is using the gamepad’s touch screen to make extra platforms to either help or mess up players. Co-op in general is similar to NSMB Wii with how crazy and chaotic the action is, so if you played that on NSMB Wii, it pretty much feels the same in this iteration. However, the gamepad is only in a touch screen role for multiplayer and not a playable character compared to the main game. This is just one of those inexcusable things Nintendo left out. What is also inexcusable is the lack of Wii U Pro Controller support, which really sucks. Those two omissions can be corrected with a possible patch in the future allowing those to be used, but we’ll see if Nintendo is willing to make it happen.

I mentioned earlier how NSMBU is the most feature-heavy game in the franchise yet because of its extra modes and support of Wii U’s social features. Challenge mode allows players to test their Mario skills in speed runs through levels, getting as many 1ups in a single combo, avoid fireballs by Hammer Bros. for a certain amount of time, glide through a whole level with the squirrel suit without touching the ground, and more. These are great additions and need a lot of replay value to the game. The other extra mode is Boost Rush, where the levels autoscroll and scrolls faster when players collect coins. This is also another solid addition and spice things up for the levels. Nintendo has said they have downloadable content planned for the future with the game and I won’t be surprised if it is just more boost rush level packs and challenges. Multiplayer coin battle from NSMB Wii returns in this Wii U iteration with free-for-all and team options.

Even though the game doesn’t have online co-op, which is sort of disappointing but not surprising, NSMBU does have some online support with Miiverse, the Wii U’s social network. If you enable Miiverse, the game tells you to input something to it after beating a level with no damage taken, getting all star coins in a level, etc. It can be a simple text message or a drawing to show off to other players and friends that play the game. You can also ask other players for help on Miiverse if you’re stuck in a certain level, can not find a certain coin, or a secret exit, which is a nice touch. 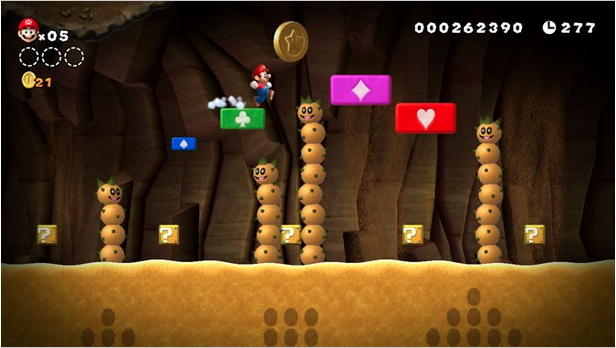 Now that Mario has finally made his HD debut, how does the game actually look? Honestly, it is pretty straightforward. It is simply a New Super Mario Bros. game in HD that looks great and that is enough even for hardcore fans. The game displayed on a HDTV is fine, but also looks fine on the gamepad. Personally, I played most of the game with just the gamepad on and the TV off as if I’m playing a handheld. There are certain levels look pretty cool compared to the majority of them. The reused art and assets for most of the levels and enemies are getting tiresome, however, which is one of many reasons the series is getting to be uninspiring. Another reason the New series is starting to feel uninspired is the music and most of the soundtrack is reused from past games. Plus, the “Wah-wah” sound effects have got to go if Nintendo is considering making more of these games.

I can see why Nintendo wanted to have a Mario game ready for their Wii U launch, but wanted to play things safe. New Super Mario Bros. U fits that description, but it is still one of the must-have games to get with the new system. The core Mario gameplay still works fine, but relying on the formula too much and using the same structure of themed worlds is getting old and uninspiring. If you played New Super Mario Bros. 2 to death, you might feel a bit of franchise fatigue as well as two NSMB games in the same year is a little too much. The challenge and boost rush modes do add more replay value to the complete package if you completed everything in the main story mode. Seeing the plumber finally in a HD console feels great, but I would wait for a 3D Mario game to see him truly shine. While New Super Mario Bros. U is worth playing for both casual and hardcore Nintendo fans, the franchise needs to take a break and come up with some original ideas to make it feel “new” again.