"You can bump the ghosts now? This is not the Pac-Man I know."
By: Jeffrey Dy | PC Reviews - PS4 Reviews - Xbox One Reviews | September 15, 2016
What if Pac-Man was not all about survival but more score focused? That's what Bandai Namco did with the Championship Edition series. The first Pac-Man CE gave more opportunities to eat the ghosts for big points. The DX version turned it up a notch introducing ghost trains to the formula. There you can eat a grip of ghosts with ease for a even higher score. When Pac-Man Championship Edition 2 got announced, I got instantly excited. However, I wondered how Bandai Namco can top themselves again? The answer is add some challenge and randomness back to Pac-Man. The result however is not what I expected.

There are lots of new mechanics to grasp in Pac-Man CE 2 to the point you have to play a mandatory tutorial. That tutorial is also the only way to unlock the primary score attack mode. The game's unlocking process is a weird design decision in which you have to play some different mazes to unlock adventure mode. Back to the tutorial, many of us know how to play Pac-Man, but Championship Edition 2 is a different beast. Yes, you still eat pellets for fruits to change the layout of the maze, but the opportunities for power pellets to eat ghosts don't happen that much now. One of the twists is that fruits and power pellets later on have to be chased like the ghosts. However, that's not the big twist in this sequel. This might be crazy for you older Pac-Man fans, but the ghosts don't kill you when touched. You can bump the ghosts now. They can be bumped three times to become angry and then you lose a life if touched. This is more of a game changer than I thought because bumping into ghosts has been disrupting my paths causing me to quickly improvise. The other big change involves ghost trains. Ghost trains follow set paths in the maze. The only way to get rid of it is eating the head of the train. Eating the head leads to a quick cutscene messing up the flow of the gameplay. You just bump the train when touching the other ghosts. When four are out there, but it becomes more luck than skill to eat them. These big changes to the core mechanics make scoring more challenging than past CE games. 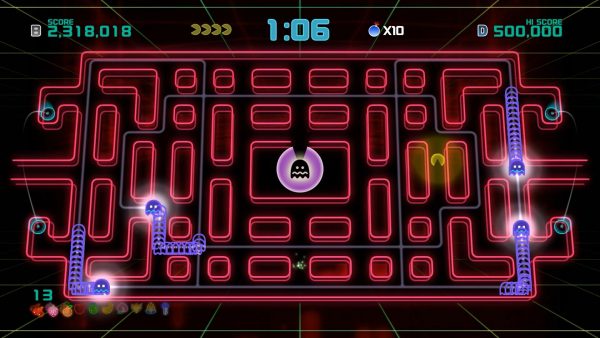 Score attack works the same in which you get as many points as you can within five minutes. There are three different versions this time around with single train, regular and extreme. Single train is self-explanatory, but regular allows multiple ghost trains. Extreme starts the action fast and ghosts only take one bump to get angry. It is also is more intense to play out of the three with limited lives and bombs. The bombs in this sequel work differently in which they jump Pac-Man back to it's spawn point. They are useful for getting the fruits fast when seen and getting into the high scoring sections fast, or saved for a score bonus when time runs out along with extra lives. Then there's the new adventure mode where it's objective based. Most of the stages involve Pac-Man eating a specific number of fruits to accumulate up to three stars on pro difficulty. Adventure is also where we get the debut of bosses, but they're not really boss battles. In these levels Pac-Man still has to eat fruits, but bosses can activate angry ghosts after eating enough pellets. Stars are determined by how many lives Pac-Man can get by the end of the battle. A boss get defeated after he eats the only power pellet. These bosses are basically a distraction on the gameplay screen and that has been my detriment in attempts. Good luck trying to beat this mode because you have to collect all the possible stars to unlock the last boss battle. Most of the levels feel like trial and error to beat because of the random ghost trains. 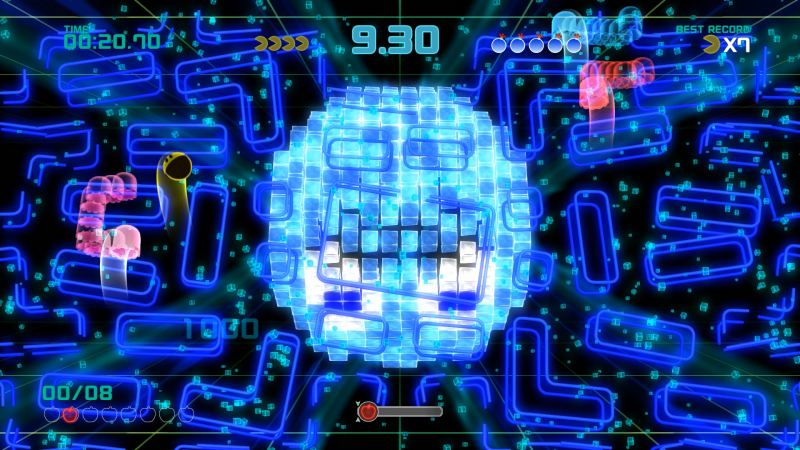 Graphically, Pac-Man Championship Edition 2 looks similar to past entries of the franchise. There are different mazes with color sets and some have jump pads that transfers Pac-Man to another point of a maze. I didn't notice any framerate issues, but controller performance leaves to be desired if you're playing on a d-pad. I was missing turns noticeably where the game feels like it's not reading inputs, but it's been better using theanalog stick. The soundtrack is okay, but not a lot of standouts compared to CE and DX's soundtracks. The first Pac-Man CE was an example of how to modernize a classic while not messing up it's core concepts. Championship Edition 2 throws a wrench into the formula with bumping ghosts and random ghost trains. Bandai Namco's design decisions along with the unlock methods are quite weird for the sake to be weird. Sure, it's more challenging to score higher, but the randomness and disruption of flow when eating ghost trains make this sequel a bit disappointing. The boss battles in adventure mode are not really boss battles and more distracting. Pac-Man Championship Edition 2 is still a good game, but the franchise has lost it's magic spark here.
Rating
6.5
Pros