Path of Exile: Sacrifice of the Vaal Expansion Sneak Peek

By: Patrick Cowles | PC Features | March 4, 2014
For those that have been following the continued development of Grinding Gear Game's Path of Exile, this week will be an exciting one. Now four months after the game's official release, the first expansion of content is no longer out upon the horizon, but a single turn of the Earth away.
Last week we were invited to meet with Chris Wilson and Jonathan Rogers, co-founders of Grinding Gear Games whom have also worked respectively as the lead designer and lead programmer on Path of Exile for a sneak peek of the first infusion of additional content, known as Sacrifice of the Vaal. Rogers sat down and walked us through the new features, content, and lore coming to the forsaken continent of Wraeclast. Here's what to expect from Sacrifice of the Vaal, set to release on March 5th.


"When we did the release, we kind of basically said, well look every four months we plan on doing an expansion... this is the first one, Sacrifice of the Vaal," said Rogers. "We've tried to weave the content for Sacrifice of the Vaal through the whole game, so both new players and old players alike will get a lot of new features." 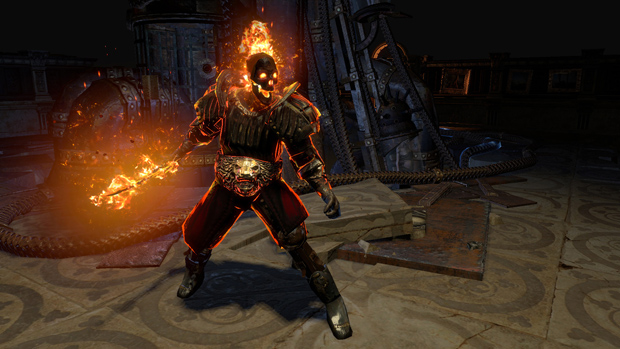 Before you get too excited about teasers for Act IV, let me pop that balloon now; this is not Act IV. Instead, as Rogers implied, this content update injects new features, content, and lore into the existing world; combining new with old. Rather than developing an entirely new act under the gauntlet of four months, the team at Grinding Gear Games formed a new mold for continued content creation; expanding content within the game's current framework and lore. Though additional acts will release, Rogers stated they plan on developing new acts over a longer development cycle. For now, exiles should expect the four month content updates to be more in line with Sacrifice of the Vaal rather than new acts; which we can expect to see once every 12 months, maybe less.
In Sacrifice of the Vaal, exiles discover that the areas of Wraeclast they've fought through are becoming corrupted by an ancient force and must cleanse the continent with the aspirational goal of slaying Atziri, Queen of the Vaal; the expansion's arch antagonist and end-game encounter.


"The theme of the expansion is that the Vaal, which were an ancient civilization, has risen again; and a bunch of the Vaal artifacts which were kind of spread around over the land of Wraeclast are starting to corrupt the areas they were in," said Rogers.


Throughout the existing zones across the three acts, exiles will encounter new Corrupted Sites; adjoining zones with magical properties similar to the game's current Map system that modify aspects of the monsters you will face within them. Once inside exiles will face a horde of monsters along with one of the 60 new bosses, which vary uniquely in regards to their mechanics. Though these new bosses are not as difficult as the act bosses; they are on par with the lesser unique bosses found throughout Wraeclast, such as Brutus the warden of the Prison in Act 1. 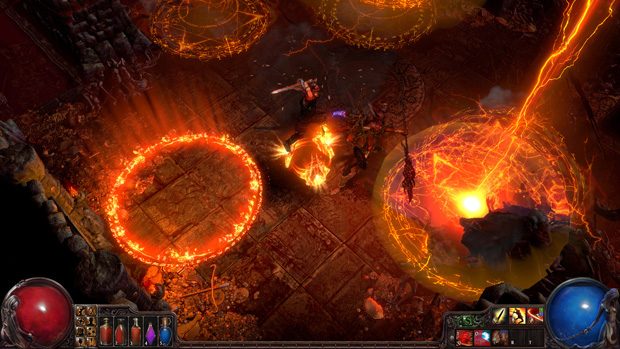 "The new bosses are sort of interesting, especially in regard to the new mechanics; they can be quite tough," said Rogers. "We try to have tricks to the bosses, and interesting mechanics wherever possible."


Once the denizens of the Corrupted Site along with the boss have been slain, exiles will be able to loot a Vaal vessel, a stone container enclosing one of the expansion's new items; a Vaal skill gem or Vaal fragment along with a cache of loot.
At launch, 14 Vaal skill gems will release with more expected to release over the next four months. Though not entirely new skill gems themselves, the Vaal skills are entirely new in regards to their impact and implementation. These substantially more powerful versions of existing active skill gems will be game-changers; not only are they visually far more spectacular than their regular counterparts, they pack incredible punch when compared to their regular versions. For example; Vaal Ice Nova casts an additional nova for each creature it hits chaining between groups of monsters, Vaal Fireball erupts in a spiraling torrent of flame shooting successive fireballs around your exile, Vaal Cyclone flips the skills' switch by pulling monsters, boxes, and crates alike into your whirling exile, while Vaal Arc literally covers an entire screen's worth of ground in cascading electrical charges. 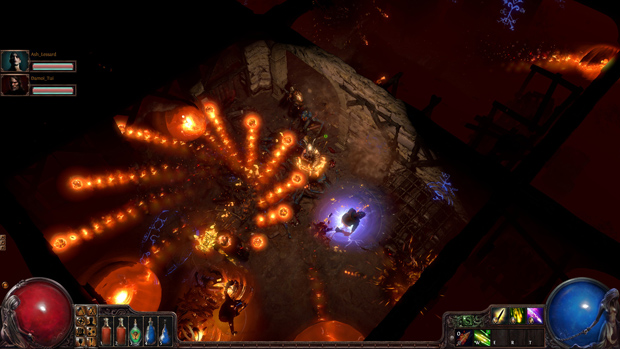 Since the expansion is Vaal themed; the mechanics of the Vaal skill gems are delineated from that theme as well.


"The Vaal are a little bit themed like the Inca; they're really into sacrifice. So their skills rather than being  powered by mana are powered by the sacrifice of enemies," said Rogers.


Instead of expending mana, Vaal skill gems charge up as you slay monsters, just like flasks. Though some of the skills charge up once before you must use it to charge up again; others can be charged in a batch and used all at once such as Vaal Teleport which can have five charges stored; when used in rapid succession the five charges allow exiles to instantly teleport across vast distances, stated Rogers.


"Which is quite nice for the design of some skills," added Rogers.


Vaal skills gems like their counterparts can also be augmented by support skill gems.
Grinding Gear Games has also expanded the economy for Path of Exile with the addition of Vaal Orbs. Though Vaal Orbs can only be used once per item, their potential benefit can be immense yet damning as their corruption is final. If you've played the game much, you must be well acquainted with failed roles on orb modifiers; with Vaal Orbs the stakes and payout are much higher. These orbs unpredictably corrupt items with a number of potential mods that are either new to the game or previously impossible.


"All of these mods that it can add are things that you would not normally be able to get," said Rogers. 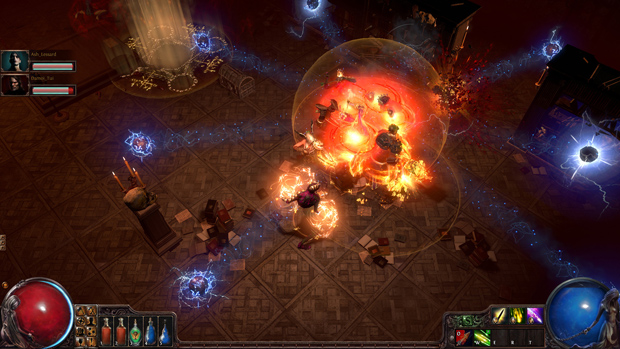 Expected to drop with a similar frequency as Chaos Orbs, the new Vaal Orbs are expected to be the most prominent and frequently used item from Sacrifice of the Vaal as they can be used to augment any item in game; equipment, weapons, skill gems, Maps, and flasks. That's a tall order to fill and due to that the team at Grinding Gear wants players to have enough at their disposal to use practically.
The Vaal Orbs can augment quite a few aspects of items. For equipment and weapons these new orbs can improve the item quality beyond 20, fix a statistic or effect to an item not available to that specific item-type, or add the effect of a unique item to one of lesser rarity, they can also add a White socket to an item which can fit any colored gem. Skill gems can have their level improved by one, meaning that skill gems at the maximum level of 20 can be improved to 21, normal skill gems can also be corrupted into a Vaal version by the Vaal Orbs. Since Vaal skill gems cannot be augmented by Gemcutter's Prisms, the only way to obtain a 20 quality Vaal skill is by converting a normal skill gem into it's Vaal counterpart by corrupting it with one of these new orbs. Vaal Orbs can also be used on Maps corrupting them with different modifications or elevating their difficulty to the next tier up. Naturally since the outcome of the modification for these Vaal Orbs is unpredictable, the adverse effect of your intention is a possible outcome.


"The concept there is it allows you to get things that would normally be impossible but the sacrifice of course is the fact that you can't modify that item again," added Rogers. 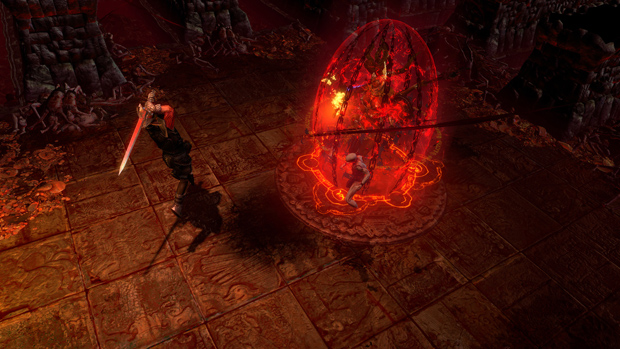 The Vaal Vessels found inside the Corrupted Sites can also yield one of four rune fragments; top right and left pieces along with their symmetrically paired bottom right and left pieces. This is where Sacrifice of the Vaal gets interesting from a design perspective, and where a lingering question from those that have played through each act is finally answered. Deep within the Solaris Temple of Act Three resides the Enternal Laboratory. In the middle of a beautifully designed circular platform within the cavernous laboratory rests an intriguing golden construct, known as the Reverie Device; which does absolutely nothing. Until development for this first expansion began, the team at Grinding Gear wasn't sure the purpose of the device themselves; however they sought a way to implement in into the game. Now they have, as this device serves as the gateway between Wraeclast and the Apex of Sacrifice, seat of Atziri, Queen of the Vaal.
Once players have obtained the four quadrant rune fragments, they can activate the device which opens six portals in front of the six statues encircling the Reverie Device to raid the hardest content developed by Grinding Gear Games.


"We told our designers, ok come up with the hardest content the game has ever seen that is going to completely destroy players," said Rogers. "We do want to try and kill players." 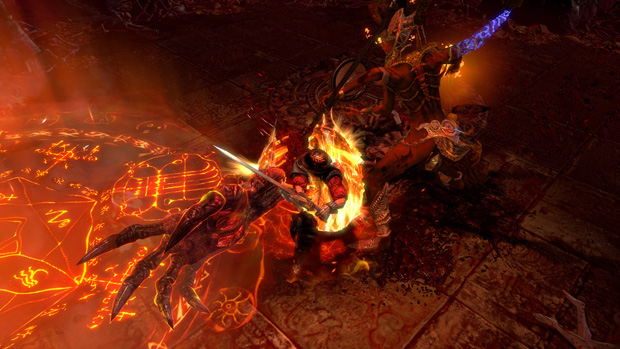 That is what awaits exiles within the fabled Apex of Sacrifice, three of the game's hardest encounters including Atziri herself. Though I'll refrain from spoiling what lurks within the Apex, I assure you these encounters are punishing and diminishing. For once you have entered one of the six portals lining the Reverie Device, you can't enter it again; each player has six attempts at summoning the Apex before they must gather four more fragments. Adding in a bit of competition, Rogers stated that the first 100 players to defeat Atziri will receive a special micro-transaction meriting their success; the first 50 from the normal difficult, and the first 50 from hardcore.
Sacrifice of the Vaal also features two new four-month leagues; Ambush, Invasion, along with a competitive mode, Cut-throat, and a player-versus-player arena, Sarn Arena.
The softcore league, Ambush, features new magical chests strewn throughout Wraeclast which are imbued with their own modifications similar to Maps and the Corrupted Sites. These magical chests spawn a group of monsters of varied difficulty depending on the chest's own magical rarity; once the monsters have been slain a substantial bounty of items will drop. They furthermore have a prefixed theme which will clue exiles to the type of items it will drop; Chemist chests will drop mostly flasks, while other chests will drop orbs, map pieces, skill gems, and so on. 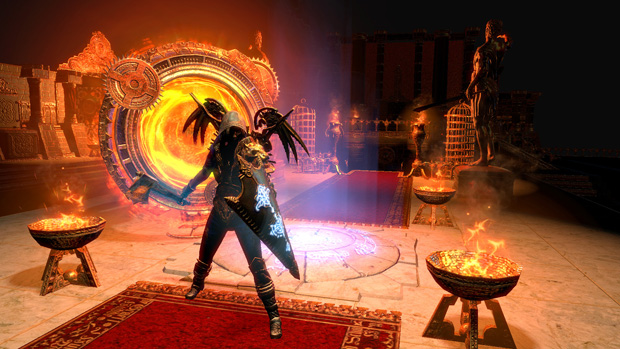 The hardcore league, Invasion, will randomly spawn one of the 60 new bosses into each of the areas across Wraeclast along with bosses from the current Maps. Rather than occasionally running the gauntlet of a Corrupted Site while playing Invasion, each zone will offer a difficult and unique challenge in the form of a boss.


"In hardcore our goal is basically to kill you," added Rogers.


Cut-throat and Sarn Arena additions are a step above the rest. Rather than slaying hordes of monsters and powerful unique bosses, you are both the quarry and the hunter in these competitive features. In Cut-throat mode players will hunt each other down, the winner being rewarded with the fallen exile's gear (though we can't confirm how much of it). The Sarn Arena, within Act Three, will offer players a free-for-all PVP area.
Although Sacrifice of the Vaal won't add another act to Path of Exile, the additional content from features to items and lore is much more than a marginal infusion of new content. The Vaal skill gems and orbs will provide another layer of character development while the Apex of Sacrifice will be an aspirational achievement for those that can silence Atziri and cleanse the continent of Wraeclast of the Vaal's corruption.