"This isn't the Peter Rabbit of Beatrix Potter"
By: Russ Matthews | Movie Reviews | February 14, 2018
Based on the latest statistics on the world that was created by Beatrix Potter, the original book, The Tale of Peter Rabbit has sold more than 40 million copies worldwide, and the expansive series of animal-inspired books have sold more than 151 million copies in 35 languages. Peter Rabbit, Benjamin Rabbit and Mrs Tiggy-Winkle have been a mainstay in many nurseries and child care facilities around the globe. The beautiful drawings and endearing tales are classics and are on the same level as Winnie-the-Pooh and Curious George. Due to the fame of this book series, it is a wonder that studios have not made a full-length feature film earlier. The scene is familiar to all who know the story of the rabbit family and their constant desire to get into the garden of Mr. McGregor (Sam Neill). Through the concerted efforts of Peter (James Cordon), Benjamin (Colin Moody) and the Flopsy sisters, they manage to get some of the beautiful vegetables out when the angered gardener confronts them. In an attempt to escape Mr. McGregor, the rabbit in the little blue jacket's actions lead to the death of the famed farmer. 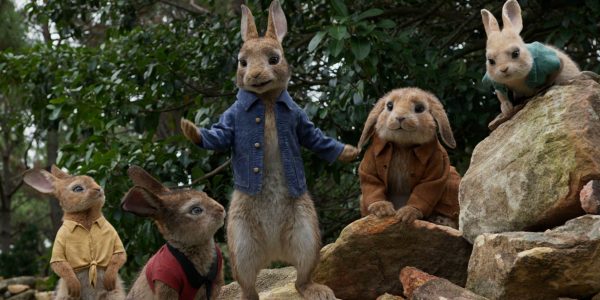 Seeing this as a sign that the animals have won the right to the garden and his house, an all-out fraternity-style party ensues on the McGregor property. Unbeknownst to the furry creatures was that the new owner of the property was to be Thomas McGregor (Domhnall Gleeson). A nephew who intends to sell the property and has to work hard to rid the land of the infested ‘vermin.’ While the battle ensues between the new owner and the creatures of the countryside, the young man falls for Bea (Rose Byrne), the beautiful young neighbor and a friend of Peter and his family. As things begin to escalate in the battle for supremacy for the garden and emotions move toward love between the humans, everything in the story races toward an explosive conclusion for all involved. What has contributed to the development of a live-action version of this tale is having access to the right technology to bring these famed animals to life. Director Will Gluck (Annie) benefits from some exceptional effects that make these magnificent little creatures so lifelike that it is difficult to see how they are not real. The partnership of these effects with a fantastic cast of vocal talent like James Corden, Daisy Ridley, Margot Robbie, and Elizabeth Debicki make this film into a winning option for families during this season. The only problem is there is something wrong in the garden: a script that is more reminiscent of Neighbors than the Peter Rabbit most have come to love over the years. 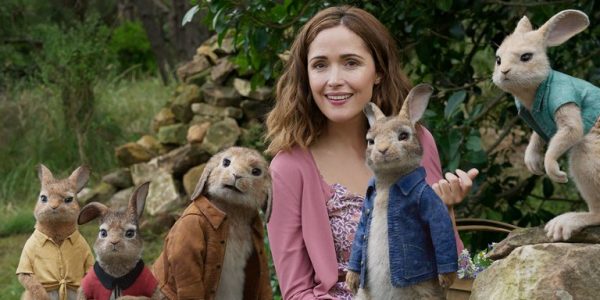 For all of its visual charm, it is difficult to find any redeeming value in this film. Putting aside the political correctness gone awry allergy controversy that surrounds this film, the concern should be more about what it is teaching children. Even though they attempt to minimize the violence in this movie, it is hard to celebrate Peter Rabbit being the contributor to the death of Mr. McGregor and to the subsequent near-death experiences of his nephew. Watching the animals going on to celebrate the demise of the farmer by trashing his house in a party that would make many fraternity houses boys blush should make most parents wonder what audience Sony Pictures was attempting to connect to this story. [caption id="attachment_102318" align="aligncenter" width="600"] 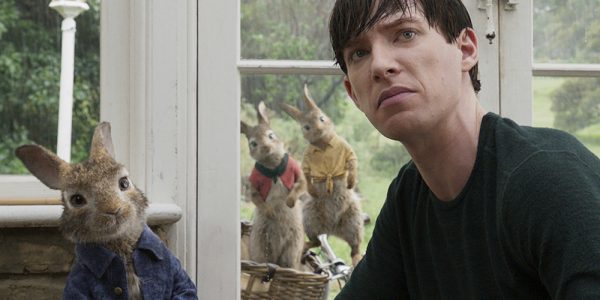 This image released by Columbia Pictures shows Domhnall Gleeson with Peter Rabbit, voiced by James Corden, in a scene from "Peter Rabbit." (Columbia Pictures/Sony via AP)[/caption] This version of Peter Rabbit is a vindictive and smart-mouthed creature that does not teach any redeeming lessons to children but proves that there is no limit to achieving what they want in their lives. Nothing is off limits for this 'waskily wabbit' with electrocution, repeated physical abuse and causing heart attacks as his methodology of revenge. He goes on to prove that this interpretation of the beloved rodent is not the one that Beatrix Potter introduced to the world. To the fans of Peter Rabbit, please know that this version of Potter's characters is a disappointing and embarrassing offering for families and fails to honour the wonderful history of this children book series. [Extra from our junior reviewer] Talking with my twelve-year-old daughter after the screening, we were both scratching our heads. What did we just see? She thought the social effects were great, there were some good laughs, but that most of the ‘slap-stick’ comedy was not very funny. Peter Rabbit reminds us of the humor of Home Alone, but there were no apparent villains to defeat in this film. Tom McGregor was not that bad, and Peter was not all that good, which made this a very confusing message for kids to know who to cheer for in the end.
Rating
4.0
Pros