Sony kicked things off with a 16 minute gameplay demo of Uncharted 4. This demo is running in real time on a PS4, which was proven during the livestream as the person playing the demo accidentally died after falling through the map. (The video below is a different demo uploaded by Sony.) Early games aren't super stable. Outside of that small misstep, Uncharted 4 looks amazing and I can't to get my hands on it when it comes out next year. Also, Troy Baker is playing Nathan Drake's brother, because at this point Troy Baker has to be a part of every game ever made.

Street Fighter V Officially Announced
Sony and Capcom officially showed the new trailer for SFV. A day before the trailer had leaked online and people were curious if the game was a true PS4 exclusive. Turns out it will only be on PS4 and PC as Sony is helping to develop the game. You can read more about SFV and see the trailer here.


Yakuza 5 is Coming To America


Released in 2012, Yakuza 5 is finally coming to America next year. This is a huge announcement for Yakuza fans over here in the West. These fans have been very vocal about their interest in  Yakuza 5 and it seems Sony will be helping to bring the game over to the US on PS3. Also Yakuza 4 and Yakuza Dead Souls are available now on PS3 digitally.

Day of The Tentacle Coming to PS4
One of the bigger surprises at E3 was the reveal of a Grim Fandango HD for PS4. (Grim is coming Jan. 27th) Now we know that Double Fine is also working on a Day of The Tentacle HD remaster that will be coming to PS4 as well. Not only that but Broken Age is coming to Vita and PS4 next year, it will be released the same day Part 2 for PC is released. Between Telltale's games and Double Fine's remasters and Broken Age, it seems the PS4 has a ton of adventure games for fans to play. Which is pretty crazy, in a good way.
[caption id="attachment_64390" align="aligncenter" width="525"] 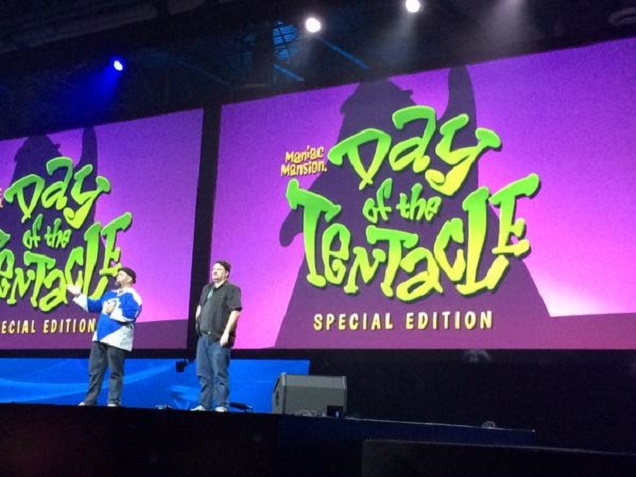 Via: Kotaku[/caption]
Free Games From EA
EA announced that in celebration of The PlayStation Experience they would be offering three games for free till the end of the weekend. Those 3 games are Plants vs. Zombies: Garden Warfare on PS4, Mirror's Edge on PS3 and Need for Speed: Most Wanted on Vita. These games are free for ALL Playstation users, not just Plus users.


Tons of Indie Games Coming To PS4 and Vita


Sony continues to support indie studios and developers. At the keynote they revealed a ton of smaller games coming to PS4 and Vita. Shovel Knight, Bastion, Super Time Force, The Forest and The Banner Saga. Also Towerfall and Octodad are coming to Vita next year as well. And while we're talking about Vita releases, Resident Evil: Revelations 2 will be coming to the Vita alongside it's already announced PS4, Ps3, Xbox One and Xbox 360 release.
Shovel Knight


The keynote was filled with cool games and announcements, which is always nice. It definitely wasn't as good as some of Sony's E3 or Gamescom presentations, but it was nice this late in the year to get some new trailers and reveals. The Final Fantasy VII PC port coming to PS4 by Square-Enix does feel like a slap to the face at Final Fantasy fans, but they'll probably still buy it anyway. Hopefully between this and The Game Awards December will become a month of gaming news and announcements. Either way, I enjoyed the keynote and can't wait to play some of these games.