"Pokemon + Tekken = The Perfect Match?"
By: Jeffrey Dy | Wii-U Reviews | March 21, 2016
Ever since Pokemon debuted 20 years ago at Japan, fans have been clamoring for battles to feel more like actual battles than being treated as a RPG. The Pokemon Stadium series was the first step, but they were basically the handheld battles on the big screen and better looking Pokemon. In other words, a true Pokemon fighting game in the vein of a Street Fighter or a Tekken hasn't happened till now. Folks that worked on Bandai Namco fighters such as Tekken and Soul Calibur stepped up to the plate to make Pokken Tournament a reality. The game was a success at Japanese arcades for it's first months, but it was only a matter of time the Wii U gets to join in on the fun. The result is a fun yet surprisingly deep fighting game that both hardcore fighting game players and Pokemon fans will enjoy. 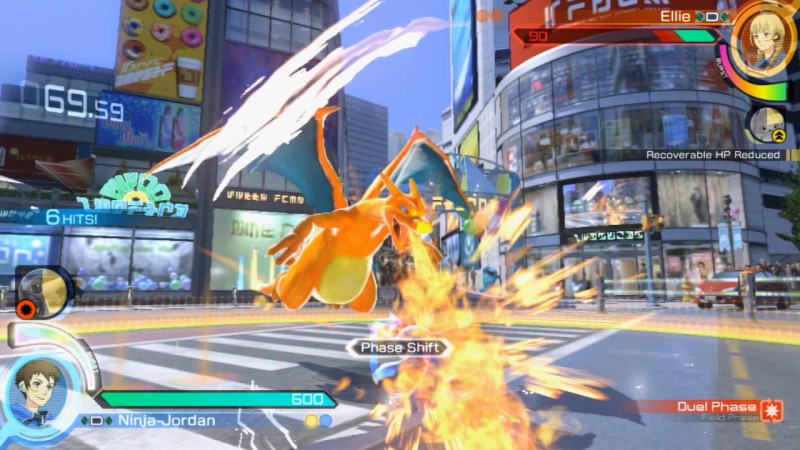 Pokken Tournament is 2D/3D hybrid fighting game that consists of two phases. Every battle begins in field phase that is similar to the recent Naruto games. Characters can move all around the 3D arena zoning each other out with projectiles or going for the phase shift to duel phase. Phase shifts happen if certain attacks hit or enough damage has been dealt, so you rarely stay in one phase throughout the rounds. Duel phase is when it goes full 2D fighting and the Pokemon have more moves at their disposal when in close quarters. Some Pokemon have moves straight up from the Tekken games such as Pikachu having Mishima-esque electric wind god fists, Garchomp having Bryan's machine punches, Charizard using Devil Jin's laser throw but with fire and many more. The 2D fighting is a light version of what you see in Street Fighter since there's no crouching, but there's still anti-air moves, finding the opportunity to go deal major damage up close and throws to keep opponents guessing. It may be daunting at first trying to consume what's going on and what to do in either phase, but after a few matches you'll get the hang of it having a general gameplan depending on which Pokemon you use. The depth in Pokken continues with the attack triangle. In a nutshell, it is rock-paper-scissors with attacks, counters and throws. Regular attacks beat throws, throws beat counters and counters beat regular attacks that all result in critical hits. Counter attacks have armor which is why it beats regular attacks and also can held to absorb multiple hits. However, they have slow startup and you can be thrown suffering critical hit damage. Is your opponent being too aggressive with regular attacks? Counters are then your best friend. How about if they're trigger happy with counters, go for throws instead. 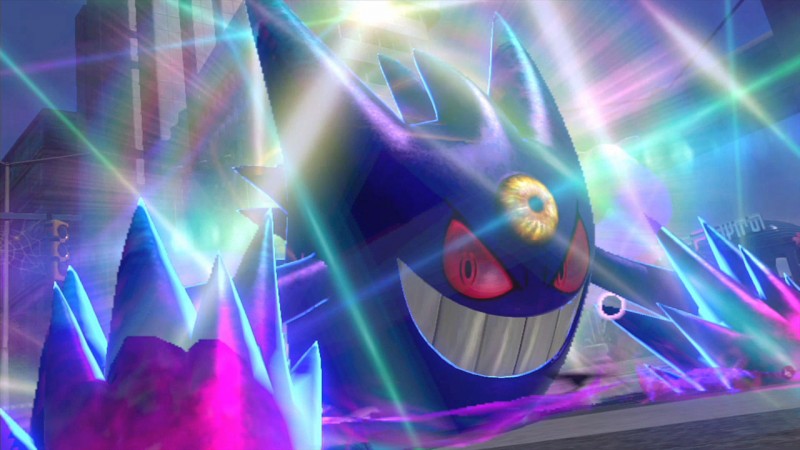 There are also support Pokemon who will assist you Marvel vs. Capcom style when it's meter is full. They can provide offense, buff your stats or prevent your opponent from going in temporarily. Before matches, you choose a support set of two Pokemon and either stick with one throughout the match or change to the other between rounds. Finding the right combination along with a certain Pokemon's fighting style adds more to the depth in Pokken Tournament. Then there's the synergy burst when a Pokemon goes into a powered up state for a limited time when the meter is full and activated. Some of the Pokemon evolve into the mega forms, but those that don't have a mega evolution can still hang with them. When in synergy burst, you deal massive damage and also have access to super moves. Super moves obviously are devastating and some of them are a sight to behold such as Gengar's. Both characters in their burst states with less than half of their HP left can provide intense moments trying to fish for that winning hit along with the attack triangle thrown in the mix. I do recommend playing through the tutorials when you turn on the game for the first time. Nia, your announcer for the entire game goes through the basic and advanced mechanics as well as high level mindsets if you want to improve your game. You'll be able to understand both phases more clearly and I'm surprised how much information is in them. I can't the say the same currently about another big fighting game that last month. The rest of practice mode has standard training mode options and a place to learn a Pokemon's move set as well as some combos. There's a lot of in-game options to ease newcomers into the battlefield like Pokken Tournament and that's unexpected yet refreshing at the same time. 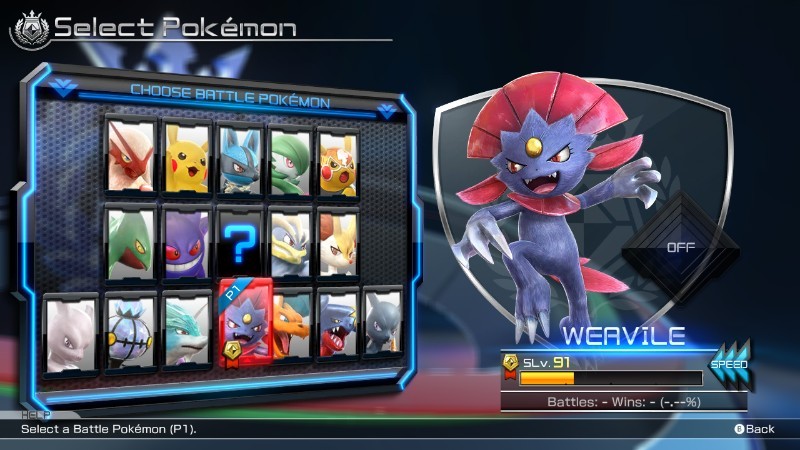 The Pokemon roster consists of sixteen spanning across all six generations. However, there are two different Pikachus and Mewtwos (both have to unlocked playing through the Ferrum League), but given their popularity, I'm not surprised by this. I do wish there were other Pokemon included because there's over 700 to choose from, but some of them are support Pokemon. The sixteen Pokemon also have characteristics of either speed, normal, technical or power. They're pretty self-explanatory given the Pokemon assigned to those roles. Power Pokemon like Machamp and Chandelure hit like a truck while speedsters such as Weavile can deal damage faster than others. Besides their roles, some shine in certain phases and also love to keep opponents away such as Suicune and Gardevoir. There are no current plans for DLC Pokemon to be added in the future, but I hope there's more to come than these sixteen even though I'm satisfied with this roster for the most part. Pokken Tournament's main single player mode is the Ferrum League where players have to battle from various leagues to become the grand champion. You'll have to play through a hefty amount of battles just to qualify for the tournament of a league. Win the tournament and then you have to pass the promotion test to move up in leagues. This mode becomes more of a grind because the later leagues require lots more matches to play, but it's better than nothing. Your partner Pokemon can level up with battles improving it's stats along with unlocking titles and accumulating gold that can spent on avatar clothes. There's also some story thrown into the mix when Shadow Mewtwo interrupts the competition as you progress through the leagues. Fighting Shadow Mewtwo is up there with some of the more difficult boss battles in fighting games because he has way more HP and deals more damage on a regular basis than you do. That alone is a worthy challenge because the Ferrum League itself is not that difficult to beat, but the later league opponents do put up a better fight. 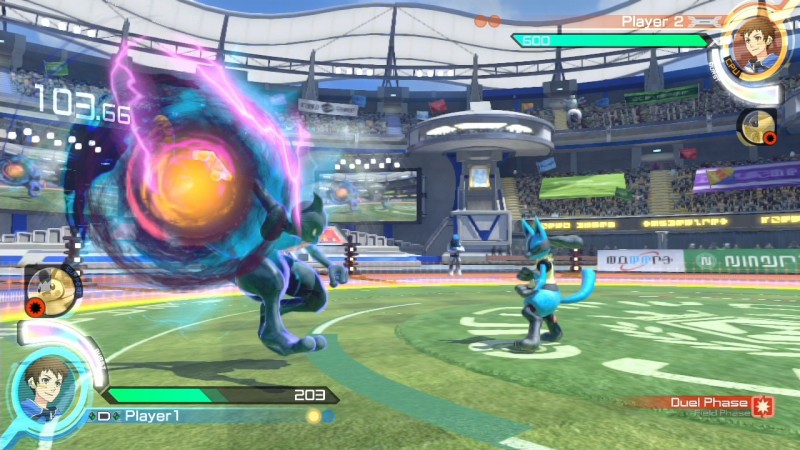 Other than the Ferrum League, there's also single battles where you face off against the AI without any stakes and also local battles with another player. However, the gamepad is mandatory for one of the players and the new Pokken Hori pad is the recommended controller choice to play the game if you're able to get it. The gamepad and Pro Controller are fine controls wise, but the Wiimote/Nunchuk is not a worthy option because of the button layout. Bandai Namco pulled a Mario Kart with Pokken's local multiplayer as the framerate is cut to half at 30 frames per second compared to the normal 60. One player gets the TV while the other has to look at the gamepad's screen. That's disappointing because the preferred setup for local multiplayer is through LAN play on two TVs for the pure 60 fps gameplay, but good luck trying to set that up unless you're at local tournaments. The online play in Pokken Tournament however is really impressive yet simplistic. There are only ranked and friendly matches, but the quick rate of playing matches makes it stand out from the current fighting game bunch. I can find matches in a matter of seconds and that's what I want to see more in the more established fighters. The netcode is also great, but obviously you'll run into some laggy matches here and there pending on your opponent's connection. Other than a standard ranking and points ladder, there's no lobbies but you can rematch as many times in friendly matches though. Playing against friends is a bit of a hassle requiring a VS code as flashbacks back to Nintendo's friend codes continue to be an issue. 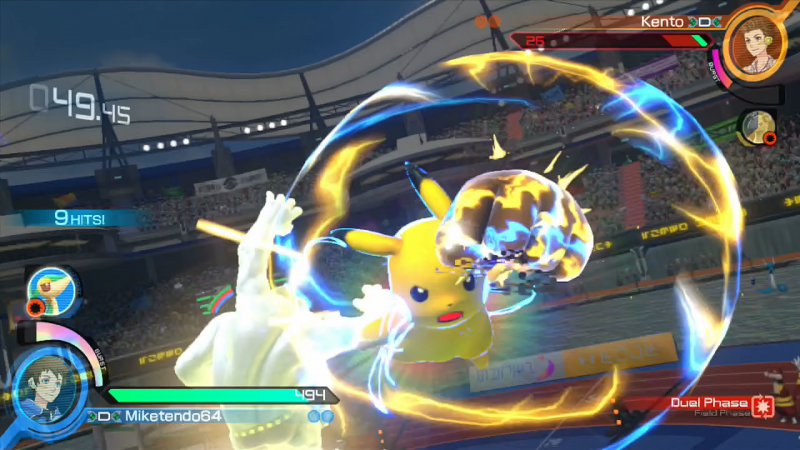 Graphically, Pokken looks spectacular on the Wii U. Bandai Namco did a superb job living up to the source material with the Pokemon from their looks, sounds and movesets. There's also plenty of stages for battles to take place. Even though there's multiple variants to some stages with the time of day, the developers also included Tekken stages as a nod to those fans into the rotation. My only gripe with the sound is the announcer Nia. She can be annoying and can't stop talking during battles, but that's the norm in anime fighting games when characters couldn't shut up. Fortunately, her advice during battles can be toned to the minimum or turned off completely. Pokken Tournament was a long time coming for Pokemon fans. They finally have a true fighting game that is both accessible to casual fans but also deep for fighting game players looking for something different to play. Switching back and forth between the two phases of combat may be overwhelming at first, but the tutorials are highly recommended to go through to understand the mechanics more clearly. There's enough single player content with the Ferrum League despite being a grind and the online play is impressive with the quick rate of finding matches on a consistent basis. However, local multiplayer is disappointing with the framerate cut unless you're able to get a LAN setup going and the announcer talks too much to the point it becomes a distraction. It's fitting that this game came out during the franchise's 20th anniversary because it is a perfect celebration of one of it's strongest suits, which is the battling. I'm excited to see how Pokken shakes out in the coming months among the gaming communities coming together to play such an unique game.
Rating
8.5
Pros