The Potential Future for Nintendo’s amiibos

"A bright future for Nintendo's figurines that is up to Nintendo themselves"
By: Jeffrey Dy | Wii-U Features | December 9, 2014
Back at E3 this year, Nintendo announced their take on the Skylanders/Disney Infinity figurines called amiibo. These amiibos based on Nintendo’s characters are supposed to give their games more than they see on the game. At first, I wasn't really excited about them since their roles have been pretty minor. Then I got a Pikachu one just to mess around with the feature in Super Smash Bros. for Wii U. Then I got a Link one and days later Samus. I mentioned in my Smash review that the collector side of me is gonna make me keep going with amiibos, but I didn't expect it to become a new addiction right away especially with certain ones now becoming rare to find. Now I see a potential future for Nintendo’s figurines that could lead them to more success, but who knows if they would even take advantage of the current demand for them.

The first wave of amiibos launched with Super Smash Bros. for Wii U, but recently some of them have been rare to find at retailers and online. The more popular characters have been fine as there are plenty of them in stock depending where you go, but the Marth, Wii Fit Trainer and Villager amiibos are near nowhere to find. With rumors of them being discontinued in just two weeks also made them more expensive on eBay. Marth has been supposedly going for $70 or more there and that’s way more than the normal $13 price. Nintendo has stated in the past that certain amiibos won’t be restocked after their initial shipment, but just like the GameCube controller adapter, they clearly underestimated the demand for these figurines. Their reasoning also mentioned shelf space at the big retailers and some of them won’t be shipped much to make room for future waves. Despite their comments about it, I still think there is a lack of communication on Nintendo’s end about certain amiibos being rare and which ones are easy to find.
Sure, other than Super Smash Bros., there hasn't been much usage for the Marth, Wii Fit Trainer and Villager amiibos beyond that game currently, but that could change with future games especially with support coming to the 3DS sometime next year. The popular characters can be used in Mario Kart 8 and Hyrule Warriors, which I can understand why Nintendo stocked more of them than the three I mentioned. Let’s hope that the second wave of characters coming this weekend aren’t as rare to get right away (personally Little Mac and Captain Falcon for me), but it seems that Nintendo is gonna approach this similar to the first wave. That means if you can’t get certain amiibos of this wave within the first couple of days, well no luck for you and maybe you can pay a reasonable price on eBay.

I didn't expect to mess around with the amiibo feature in Super Smash Bros. for Wii U other than my Pikachu one, but as I got Link and Samus, I decided to test further if these amiibos can actually play similar to the playstyles I want to implement to them. With Pikachu, I made him play more like a tank character, meaning he can take more damage with improved defense and deal bigger damage to opponents while losing some speed. The result is that my Pikachu is tough to take out due to auto healing and better defensive stats, but also kill opponents rather quick especially with the Thunder Burst custom move. For Link, I wanted him to have a “lame” playstyle. In other words, I want him to play more keep away with his custom projectiles and bombs than relying on sword attacks other than when the opponents are close. I managed to get him close to that with improved speed and damage even though he’s not that good with the bow. As for Samus, she plays more in your face pressuring with missiles and has similar stats to my Link. While it doesn't feel perfect and not live up to it's full potential like I mentioned in my Smash review, the amiibo implementation in Smash is still interesting yet successful as we see Fox amiibos go pretty far in actual tournaments.
It was pretty telling that Smash was the go-to launch game for amiibos compared to other games that currently support it. Mario Kart 8 just has more racing suits for Miis and Hyrule Warriors has the spinner weapon specifically for Link, which isn't much compared to Smash. Captain Toad: Treasure Tracker, Yoshi Wolly World, Kirby & The Rainbow Curse and Mario Party 10 are the next games to support amiibos, so some of them that are out now and coming are gonna get more mileage. Nintendo has not said much about how they will be used yet, but I’m hoping they would have a focused feature like Smash had than just tacked on “downloadable content” because they can be so much more than that. 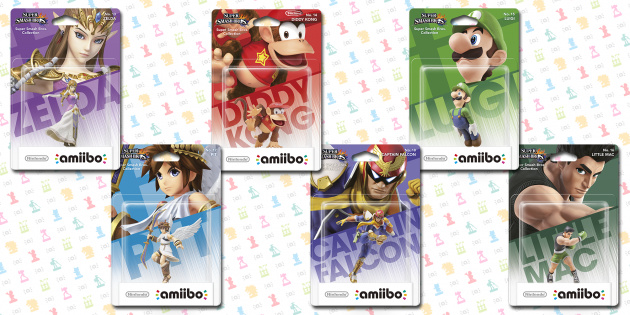 Other than the fully amiibo-focused game Nintendo fans are hoping it will happen similar to Skylanders and Disney Infinity, these amiibos have the chance offer more than just collector’s value and in-game content. Collecting all of these will cost hundreds of dollars, so why not get more than just AI fighters in Super Smash Bros. I would like to see discounts on eShop/Virtual Console games or perhaps even free depending on the game. For example, buying the Pit amiibo can get you a discount on Kid Icarus on the Wii U Virtual Console or even Uprising on the 3DS. The same can go for Mega Man when he comes out early next year getting discounts on all his old games on the eShop. These amiibos can also be used for Club Nintendo points as they don’t need to offer as much points as games do, but it would be nice if more stuff can be used for those points. It does feel like one of those “too good to be true” ideas that Nintendo won’t consider at all.
Then there’s the idea of certain characters having more than one amiibo. Mario Party 10 could likely be the next game to spearhead a wave of new amiibos with repeat characters such as Mario, Luigi, Peach, Yoshi & Donkey Kong as there are rumors about that possibly happening. I think that game does need a big amiibo feature to make it more than just another typical Mario Party. Add more non-Mario characters to the mix like Mario Kart 8 started to do with Link and Animal Crossing characters and more amiibos could be used if those characters are in the game in some capacity. It could also be like Smash where amiibos can be AI competitors with specific abilities that the normal characters don’t have. I just don’t want it to be similar to Mario Kart 8 where it is just more outfits for Miis, but I have a feeling Nintendo will do that just to have the amiibo check marked on their game. Also, Mario Maker and the new Zelda can also spark new Mario and Link amiibos (can you imagine a 8-bit Mario one for Mario Maker?) with interesting features.

Of course there are the retailer exclusive amiibos that third wave is introducing early next year. This makes sense from a business standpoint especially if Nintendo is still gonna back up their words that certain amiibos will be in limited supply. The rarity is become an issue especially with some of the obvious characters getting more than one amiibo in the future. Hopefully Nintendo does give every character a fair shake in terms of supply and demand for consumers to get if they’re trying to collect every single one. Another possible approach would be limited editions of upcoming games like Yoshi Wolly World and Kirby: Rainbow Curse including an exclusive amiibo, but Nintendo usually never release limited editions in the US compared to Europe. Despite that, Nintendo game/amiibo bundles could be something retailers can start to do and then Nintendo themselves will follow suit as we are seeing that already with Smash.
It is indeed only the beginning for Nintendo’s amiibos and they have been a success for two weeks now despite some of us, including me, being skeptical about how they are used so far. There is so much potential for these figurines to be so much more besides the inevitable Skylanders/Disney Infinity-esque game. From eShop discounts, certain characters having more than one becoming a reality, more focused features in games like Smash and perhaps bundles with exclusive versions, amiibos can be Nintendo’s Pokemon for a new generation. Speaking of Pokemon, oh boy at the amiibo possibilities with the 3DS games. Collecting these reminded me of the glory days of Pokemon cards back in the late 90s. Leave it to Nintendo to get me interested in the figurine business that Activision and Disney couldn't do.